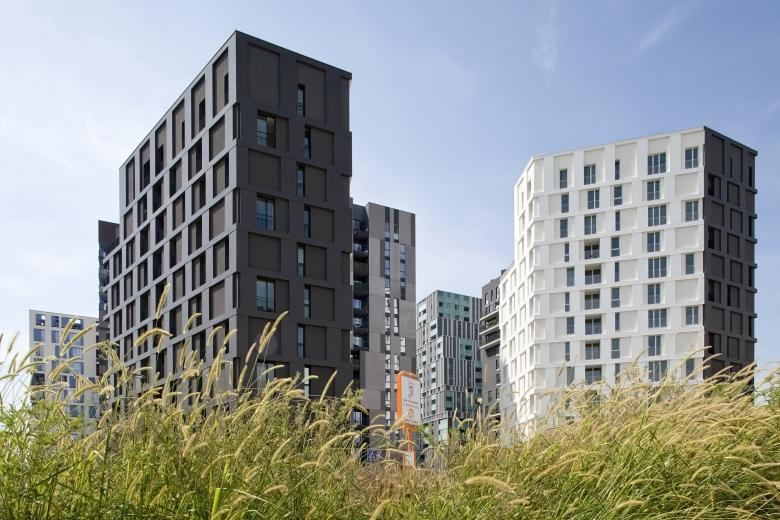 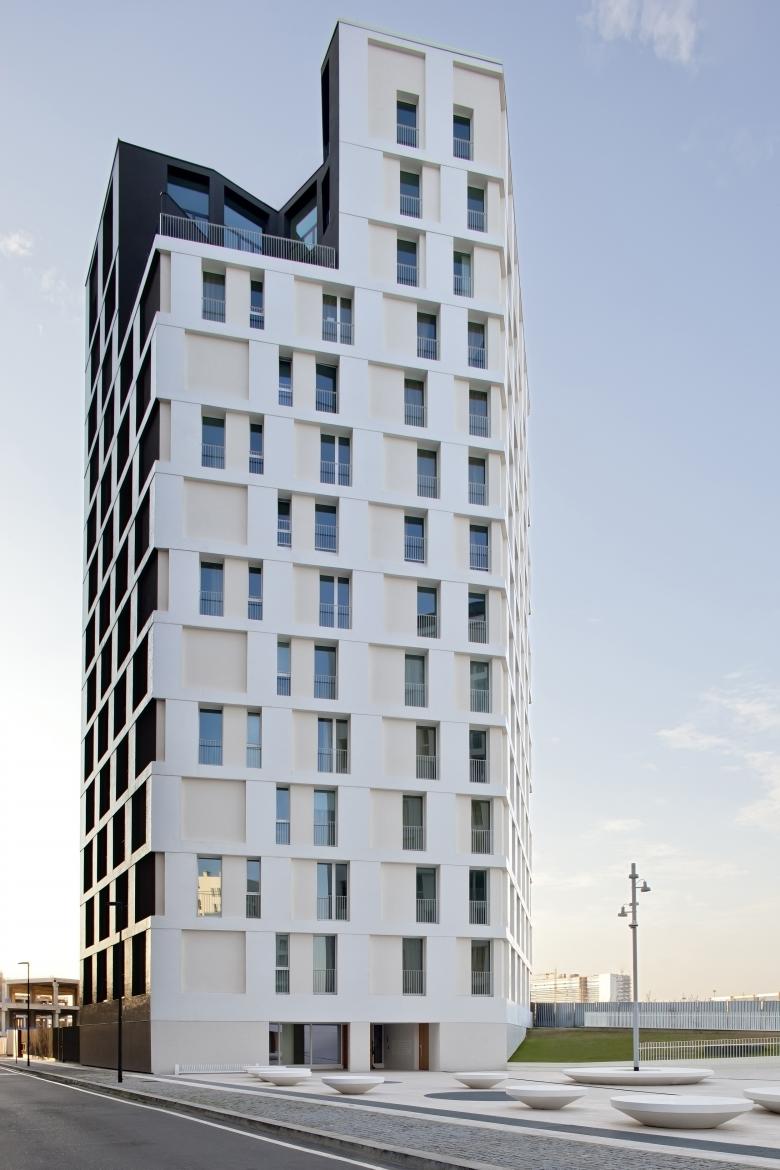 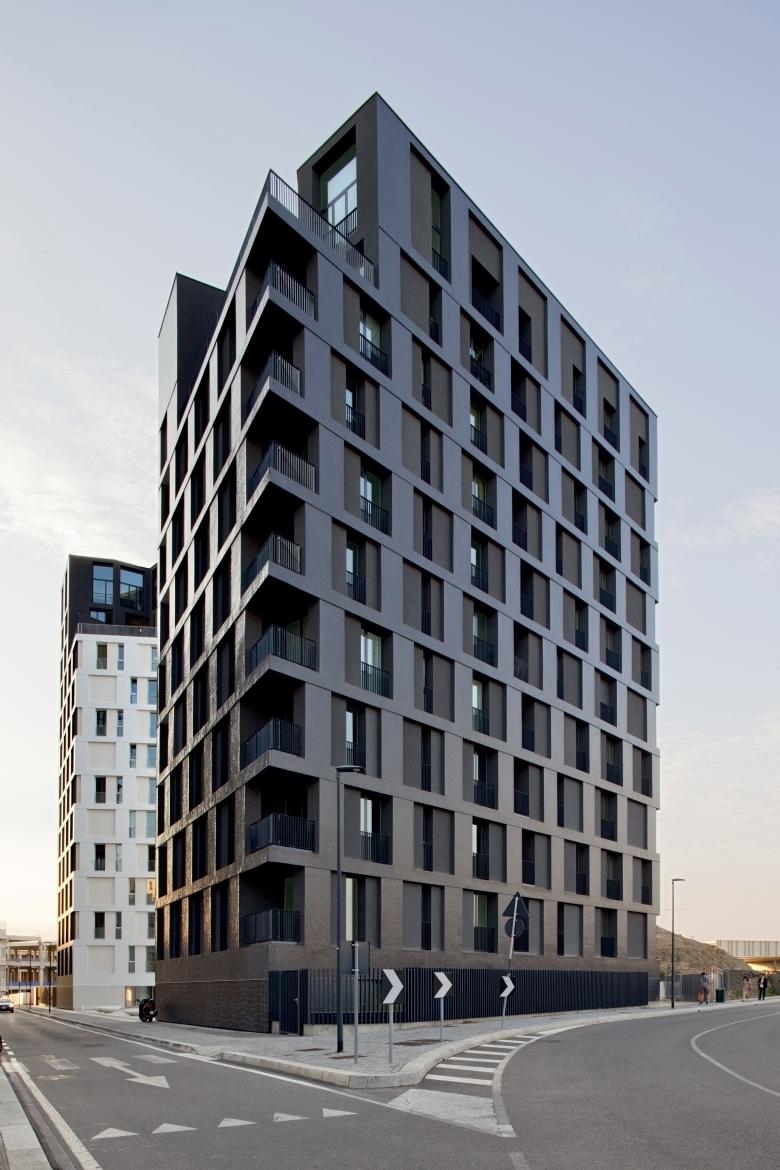 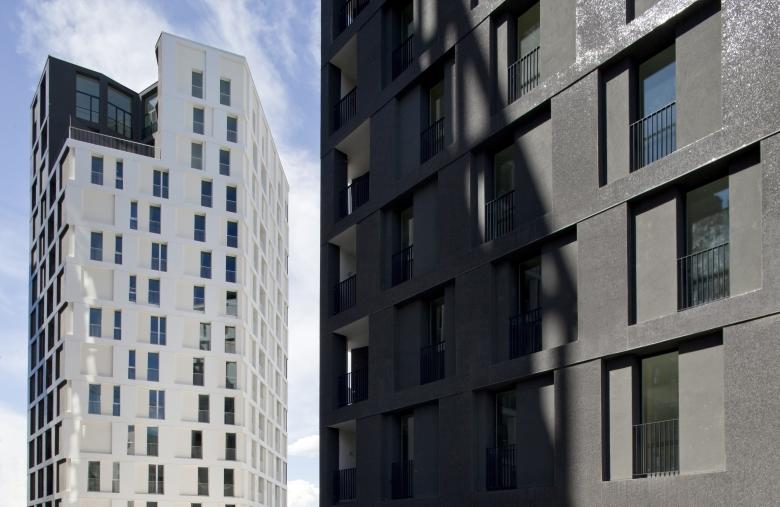 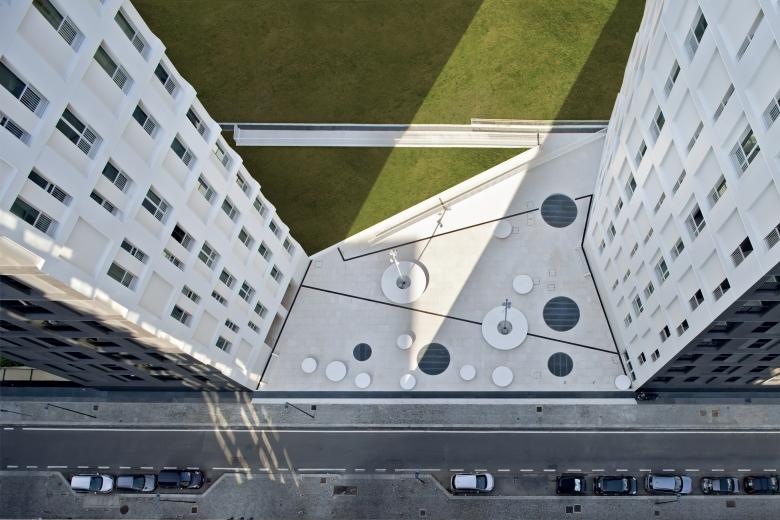 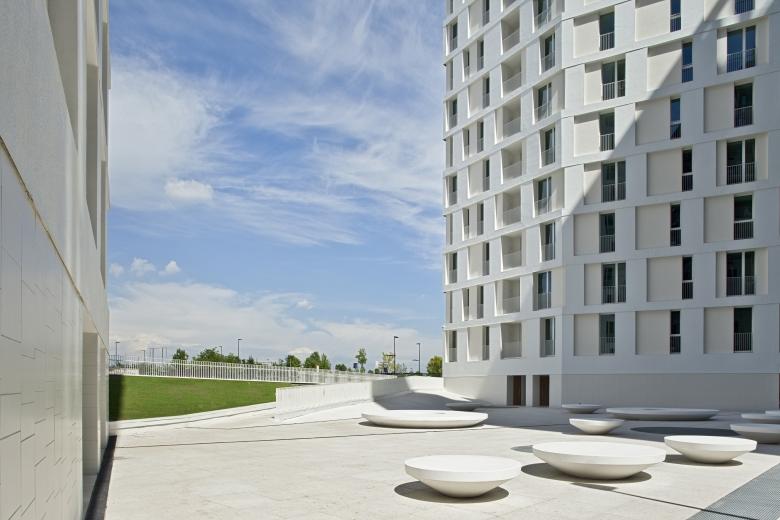 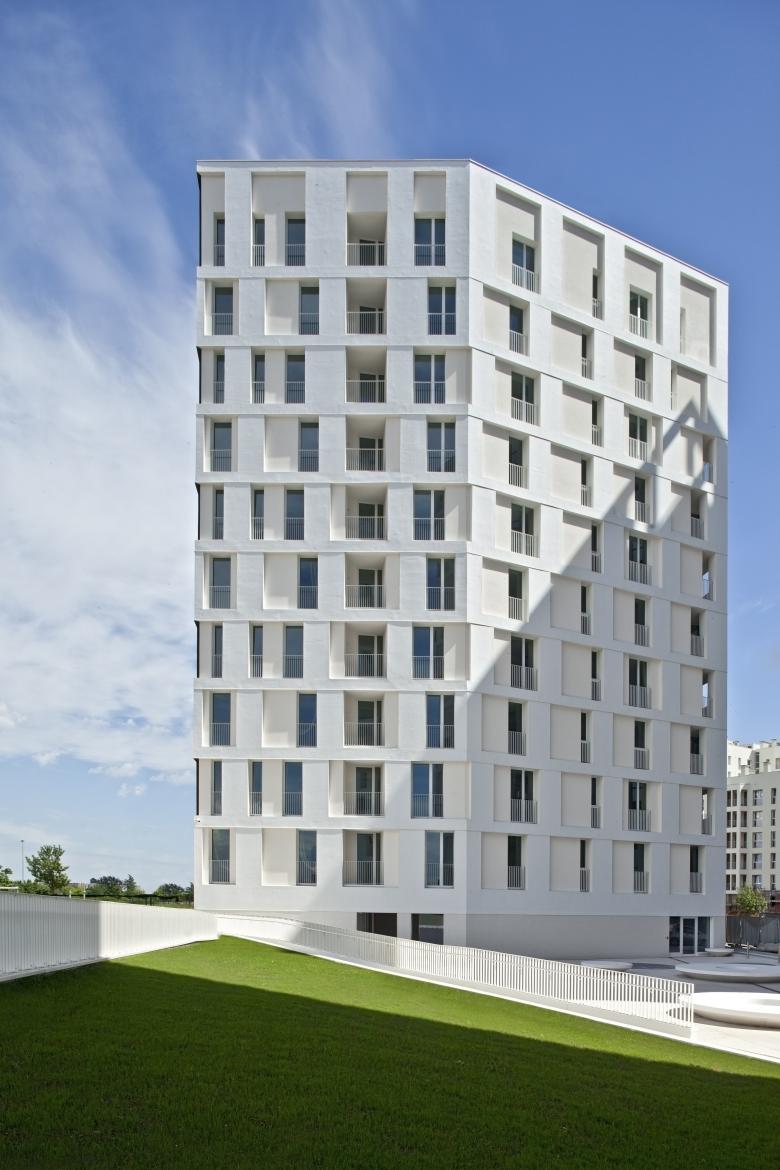 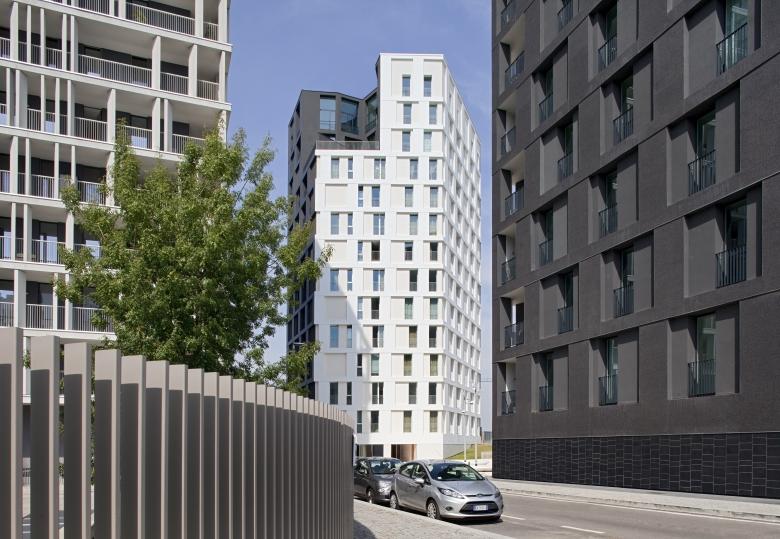 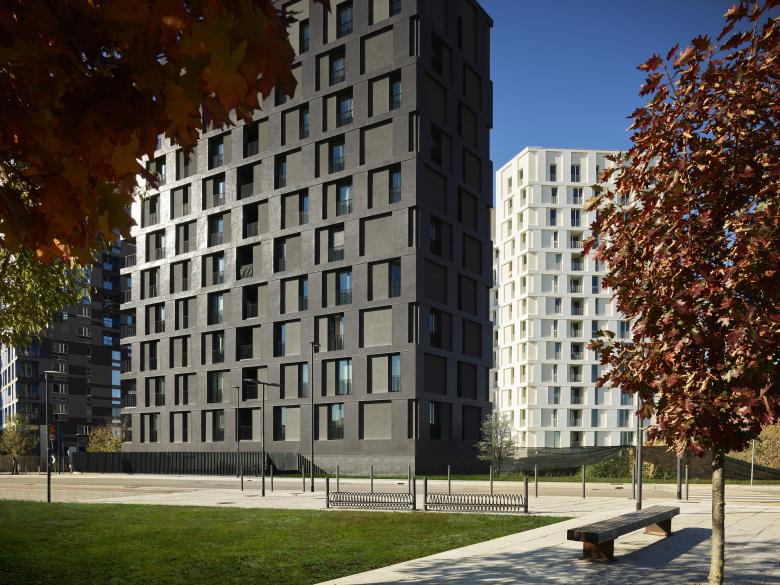 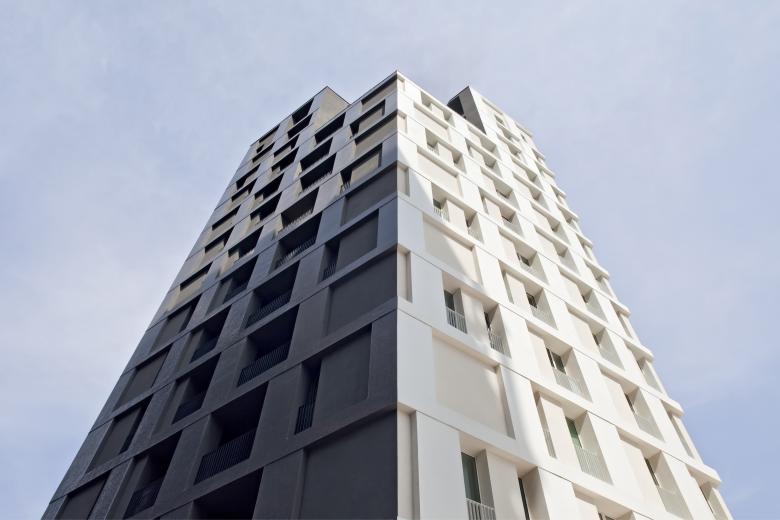 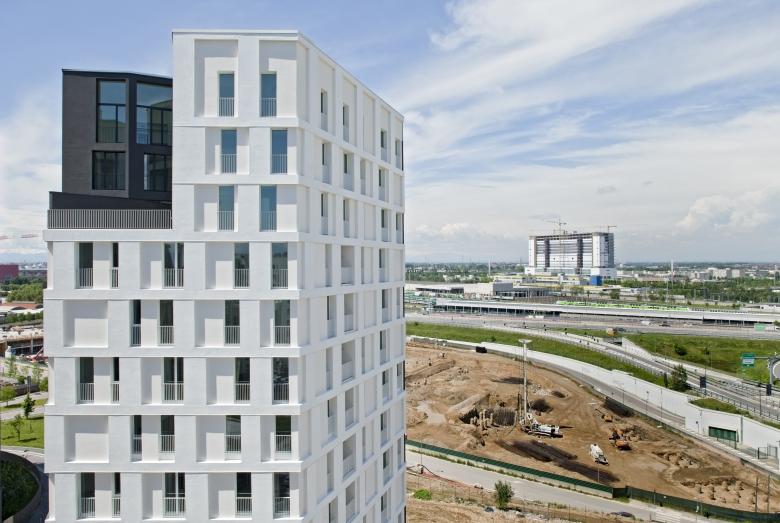 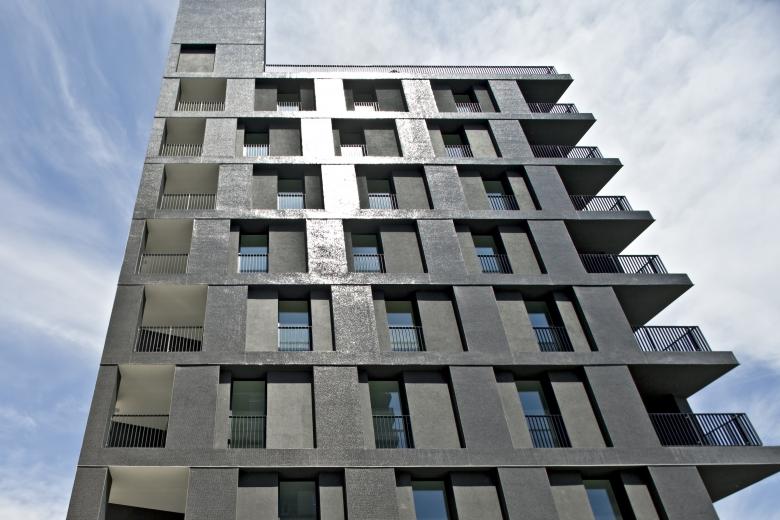 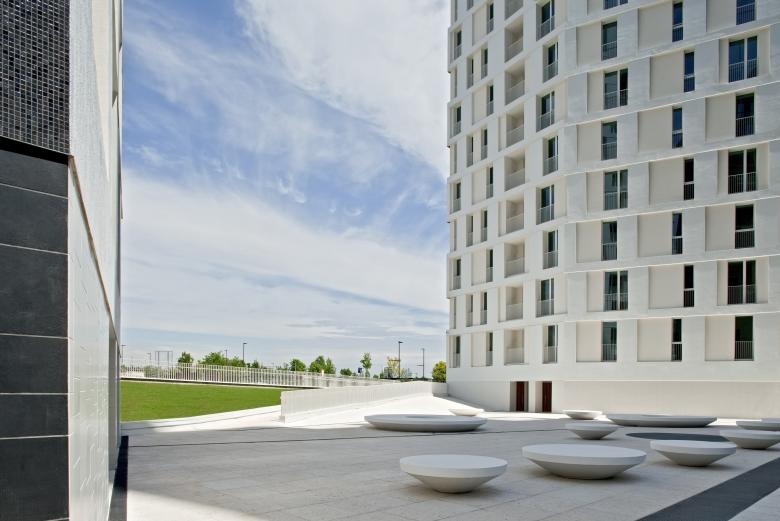 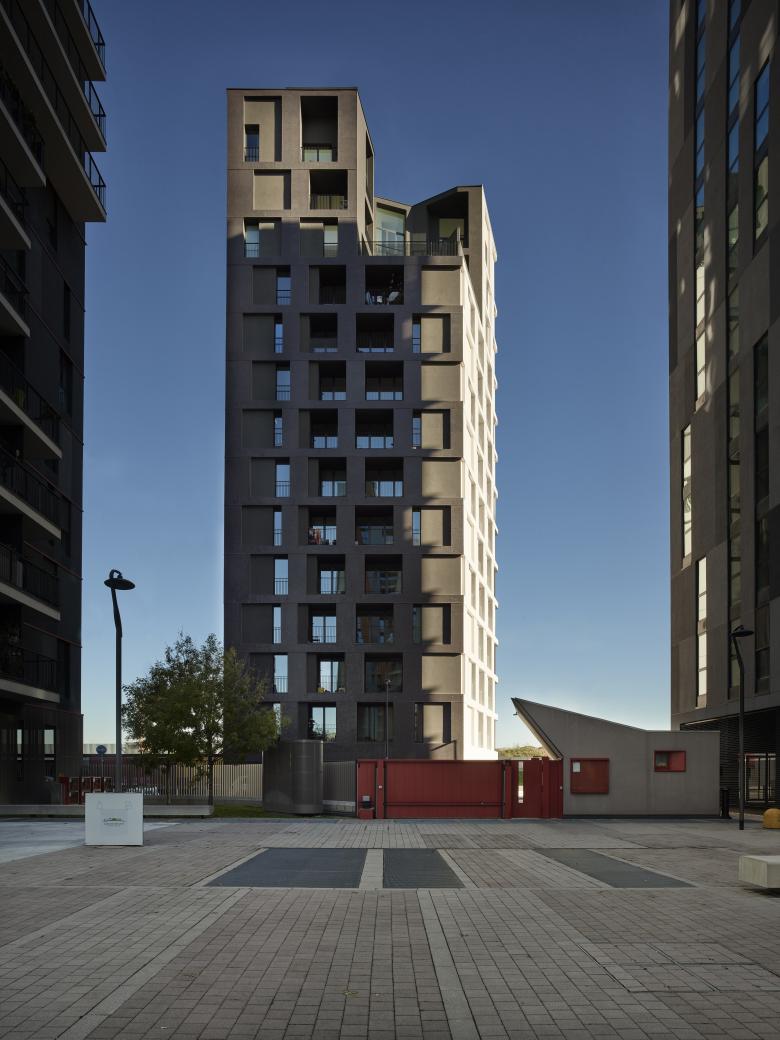 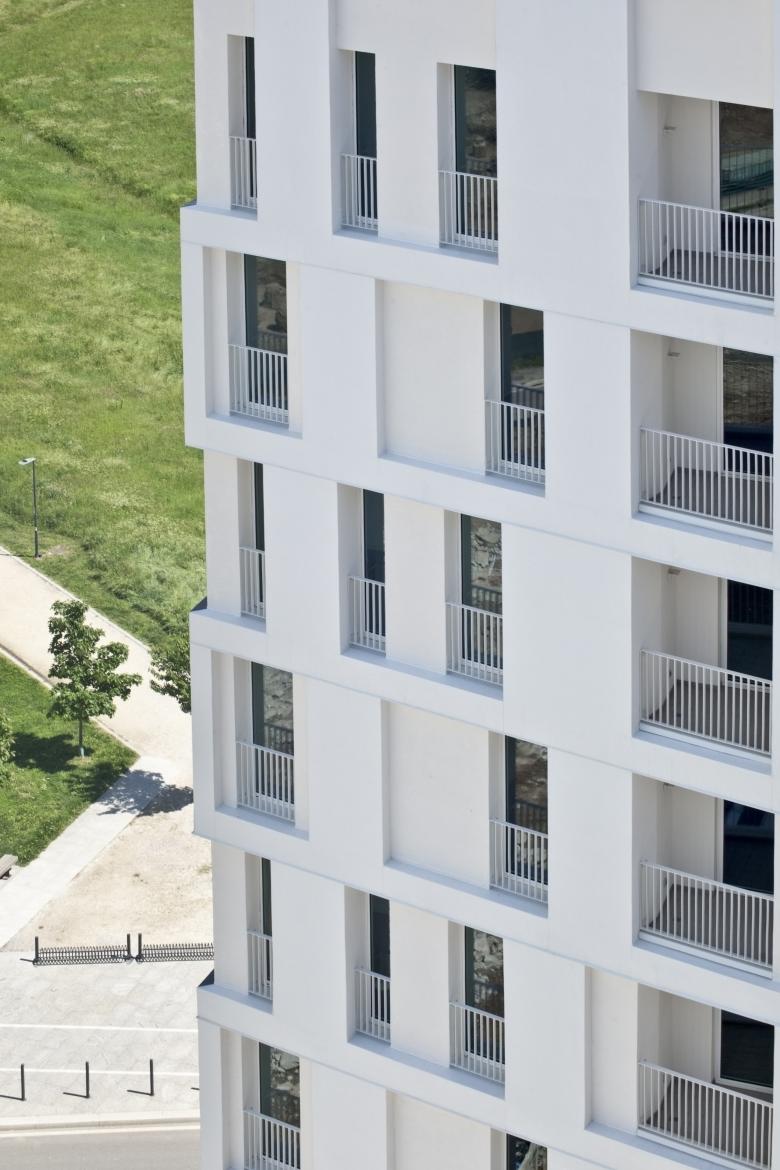 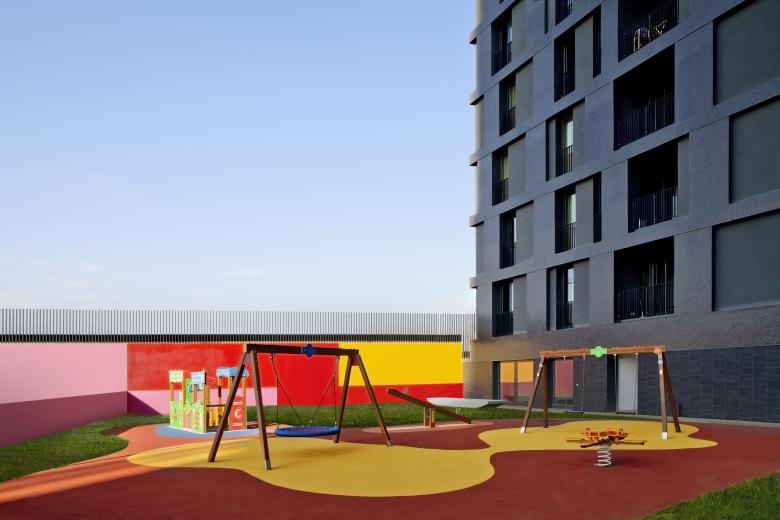 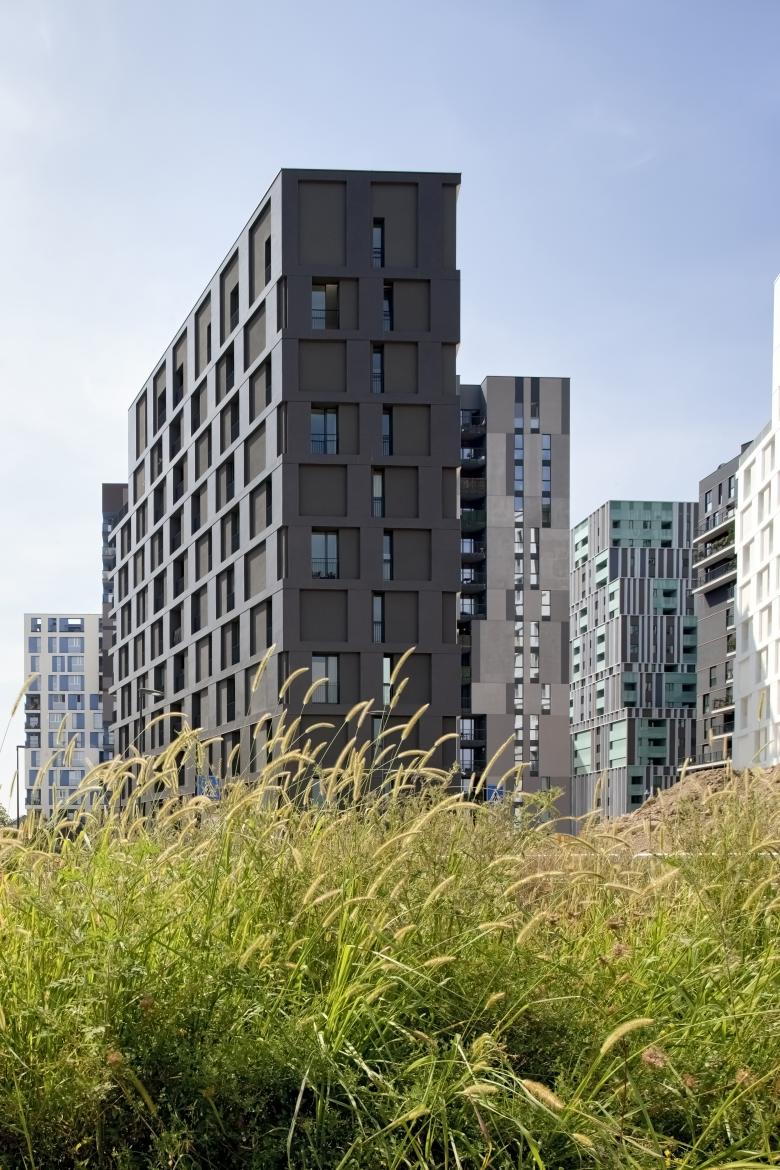 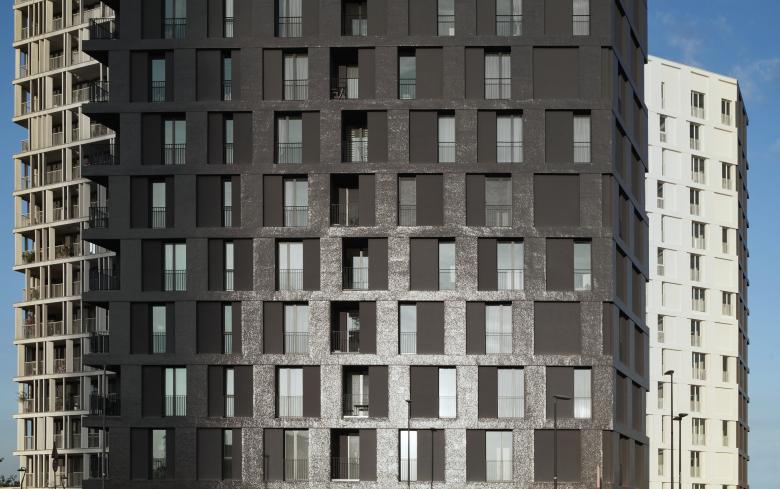 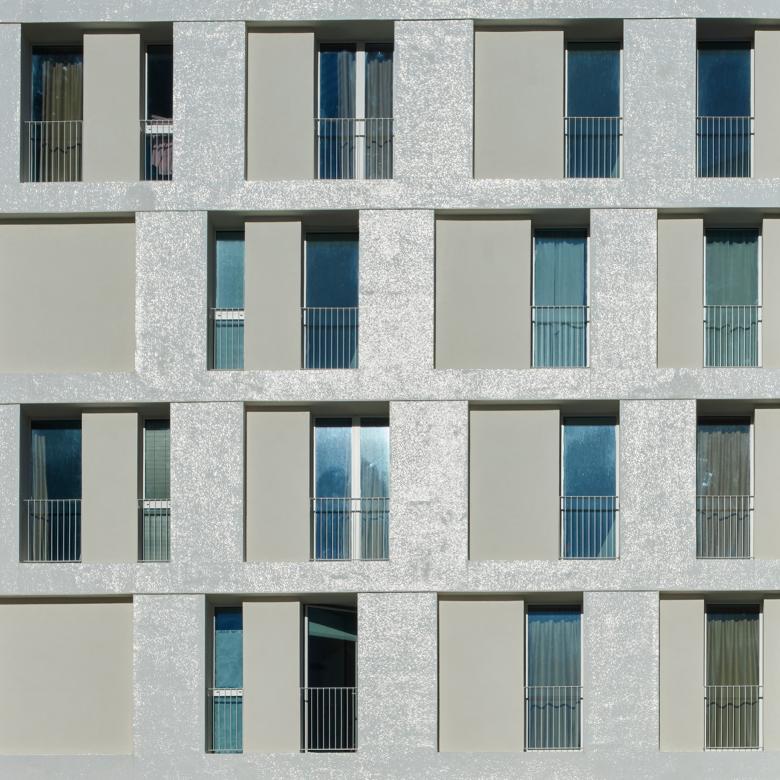 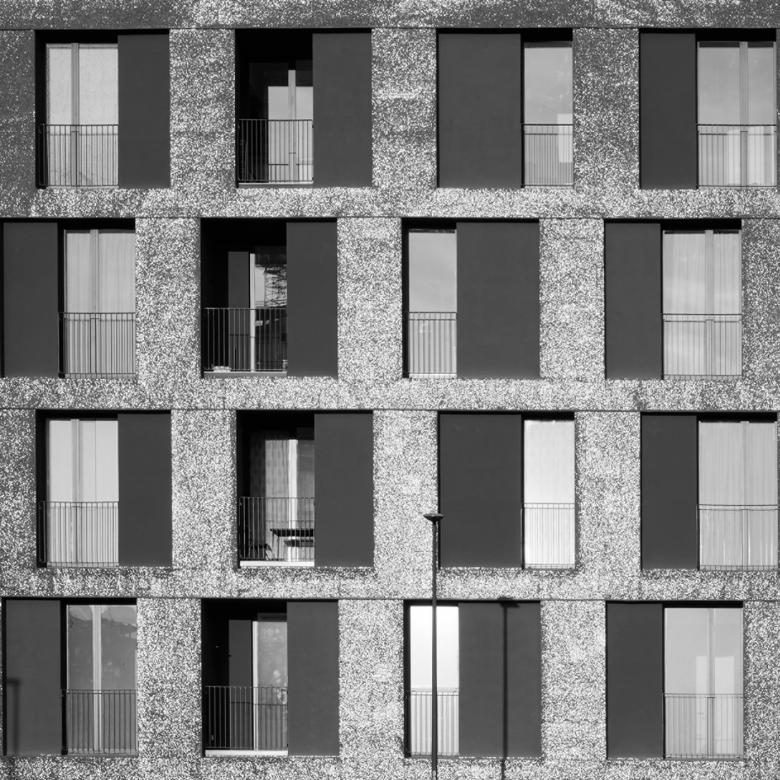 The plot R11 is located at the northern end of the Highrise Village, bordering the park Cascina Merlata, the largest housing development in Europe. Initially planned as a volume surrounded by a fence and meant to be a ‘gated community’, the architects proposed to break the plot into two parts to give back to the community a public space and create an urban door between the Village and the Park, the latter extending as a public square, inside the plot.

The idea of a new community space, borrowing from the urban concept of the "Venetian campo" moved to Milan to create a square, a public space that connects the two residential towers, strengthening their community identity though the design of a place for all people.

The new Piazza relates the different heights of the pedestrian space and the park and create a threshold between the built and nature.

The project is critical of the concept of the 'gated community'. By giving public space to the surrounding community, C+S Architects physically design a square in material and chromatic continuity with the towers, which underlines the importance of sharing the collective space as a key point to strengthen the identity of the community. The square is a free, durable, open public space, accessible to all (including the visually impaired) that connects the difference in height of about two meters between the park and the street, through a series of ramps. But it is also a fun public space capable of transforming itself into a playground for children or skaters, for rest and play.

Made of white Prun stone, the square is dotted with a series of circular benches, which have been positioned to prevent the intrusion of cars. The mono-material and monochromatic space underlines the urban role of the complex as a threshold space between the park and the city. A difference in height of about two meters between the road and the park is overcome with the design of 5% sloped planes.

On the sides of the square two towers (fourteen and twelve meter high) define the space and seem to have been generated from the same volume, split in two by the public space. The two towers develop 10,830 square meters, distributed in 103 flats, all sold as affordable housing according to the Regional regulations. The ground floor of both towers houses the entrance hall and service spaces, such as bicycle storage, common room, gym, laundry and storage room for separate waste collection. C+S project was a pioneer, in 2011, in introducing ESG drivers when inserting hybrid and common spaces within the residential complex.

The towers are arranged on two underground levels of parking for 104 cars, technical spaces and cellars as well as a colorful outdoor playground for children that was designed with a participatory project in collaboration with the Social Housing Foundation.

The total one hundred and three apartments, all sold in record time immediately after the construction site started, are built in energy class A and provide, according to the well-established sustainability strategies, a geothermal district heating and cooling system on the floor, one for controlled mechanical ventilation and photovoltaic systems, in order to reduce emissions and consumption.

The towers, bent, modeled and oriented to ensure that all the apartments could enjoy the view of the surrounding green, have a different material treatment on the fronts: the elevations, strongly rhythmic, are designed by full-height windows, which are cladded with the same white stone of the square up to the first level, creating a continuity between the horizontal and vertical planes, while on the outside, towards the village, they are finished with a darker coating, chromatically matching the adjacent towers . The darker color of the side fronts helps to underline the strength of the incision of the collective space of the square, which is transformed into the 'door to the park'.

From the second floor the cladding of the towers becomes a glass mosaic, recalling some finishing of the masters of Italian Architecture (Gio Ponti's precious interiors or Moretti's light textures), and to mean that the city is defined by precious urban interiors to inhabit.

The finish of the facades (beyond the ground floor) consists of a coating insulation, on which the Sicis-type glass mosaic is glued, with 1.5x1.5 cm tesserae.

Sicis-type glass mosaic is not a flat coating. Each tile is variable in section. This choice allows the façade to transform itself by reflecting the light in a different way every minute of the day. The façade seems to light up and change: it is activated by the variation of daylight and climatic changes.

The composition of the façade is simple and has a regular mesh on which a series of differentiated stratifications are drawn in depth. The main pattern is determined by the regular design of a grid of large square openings that defines the size of the loggias. The texture is thus characterized by the irregular alternation of loggias, windows and blind parts covered with colors in accordance with the mosaic. Each material was also chosen for its durability and recyclability over time.

With the completion of the two R11 towers and the square, C+S Architects officially enter that contemporary laboratory, that has become the city of Milan in the last decade, while remaining consistent with their own research. "C+S firmly believe in the potential of a free, well-designed public space capable of being activated by people, their memories, their dreams and their experiences that will help create future memories and identities" - write Carlo Cappai and Maria Alessandra Segantini - “For this reason, through the development projects in which we are involved, we work to give back to all citizens the seeds of a shared durable and well-designed public space that they can cultivate with their actions”.