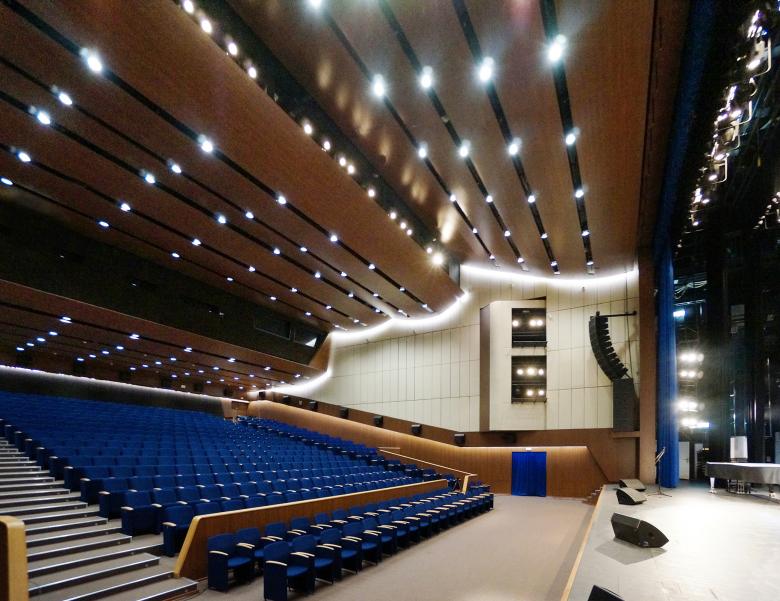 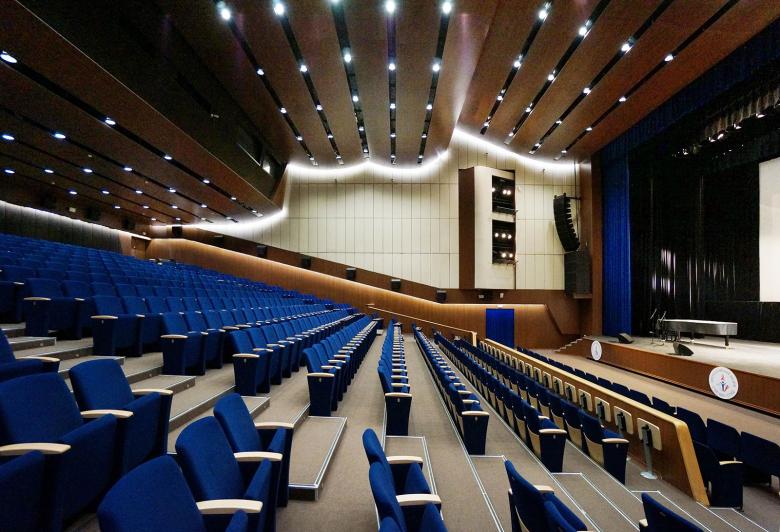 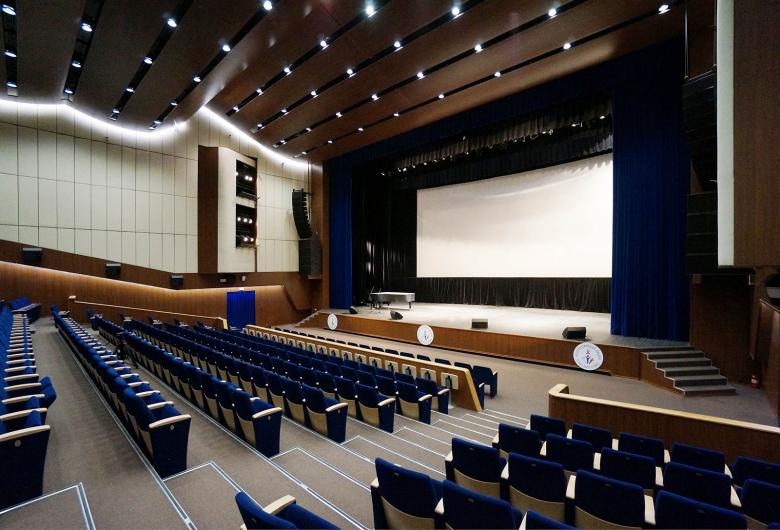 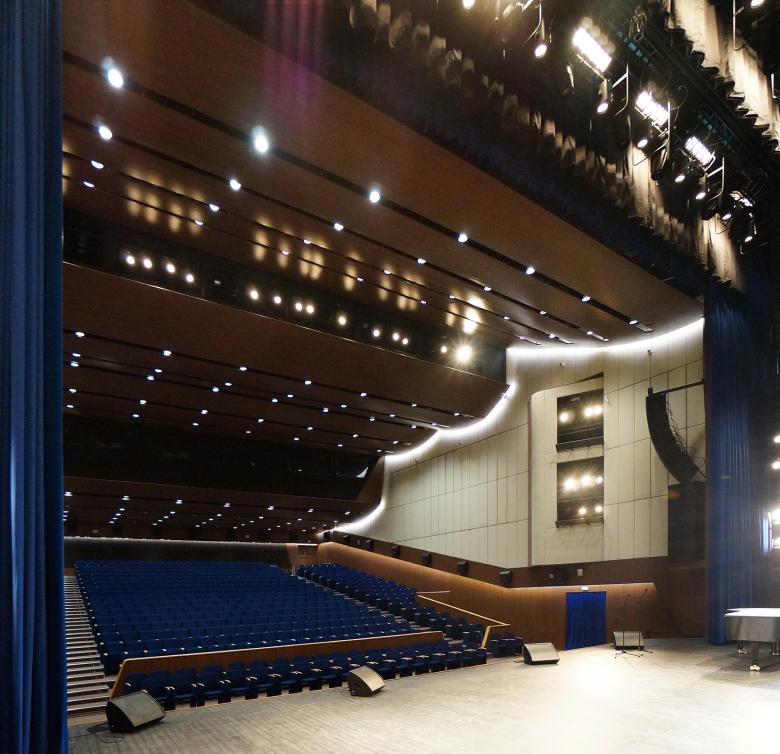 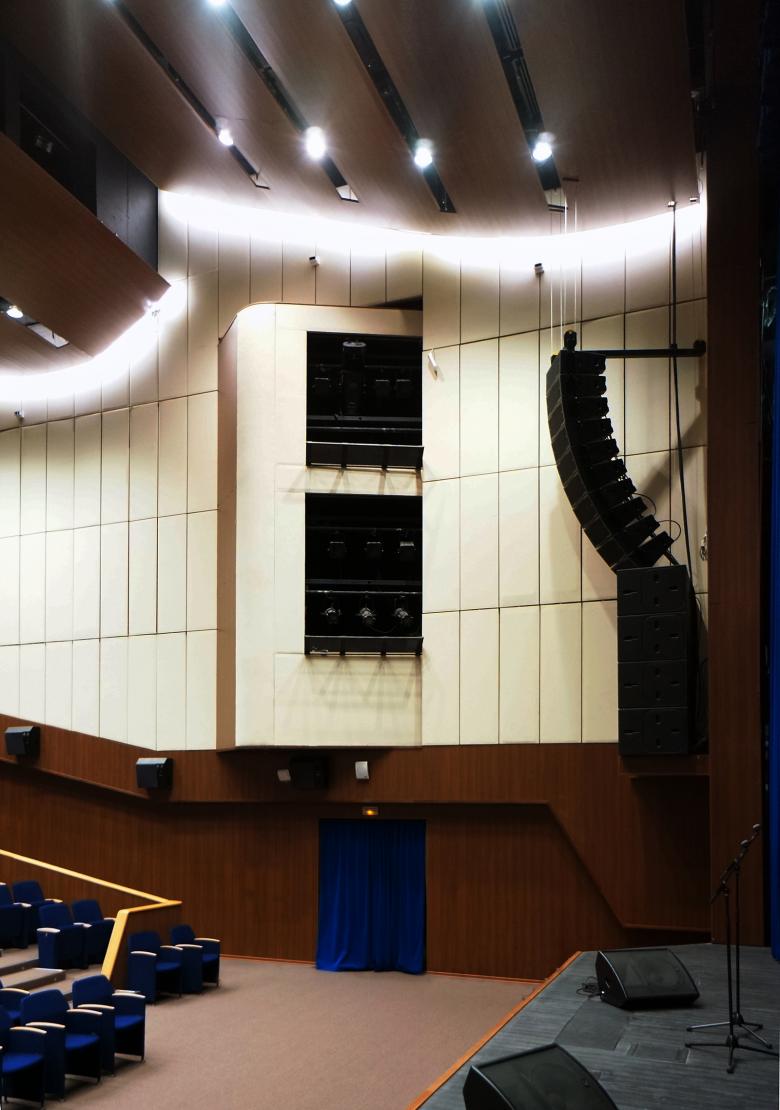 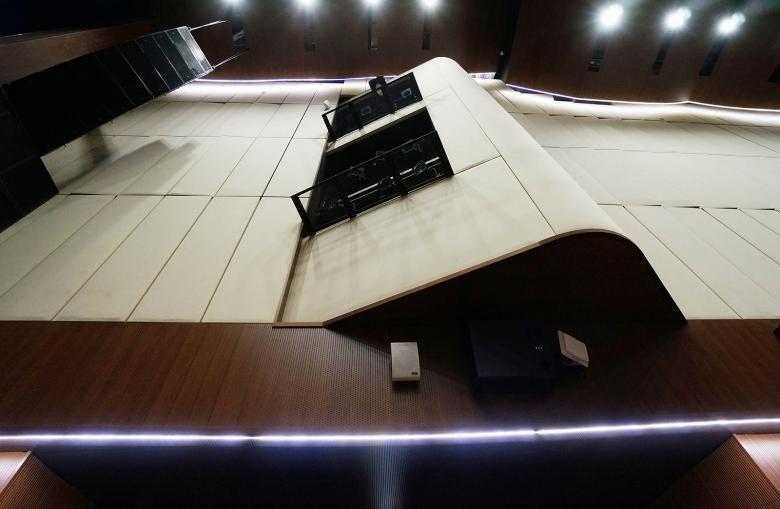 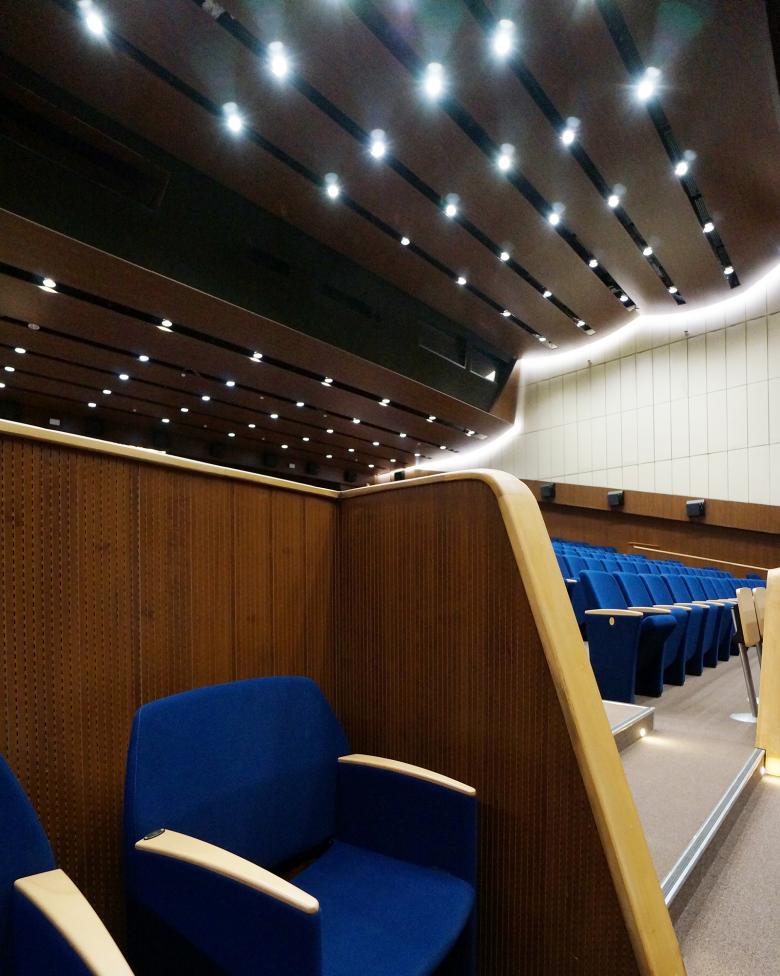 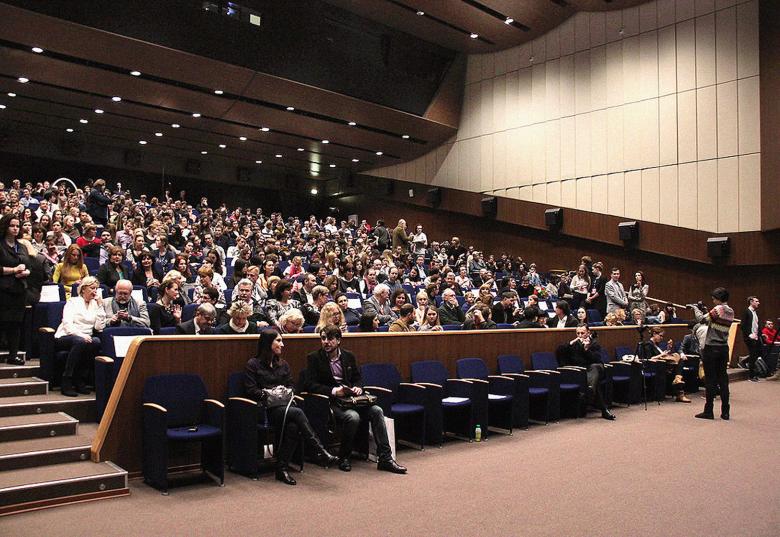 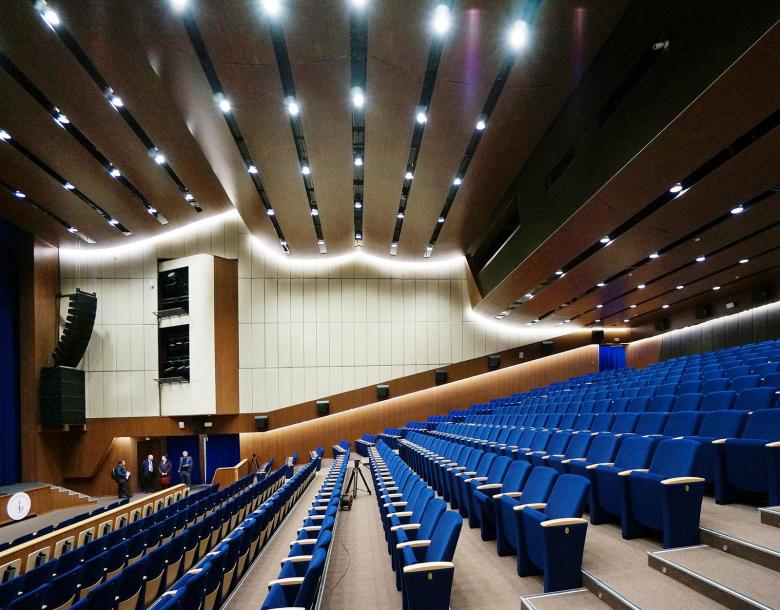 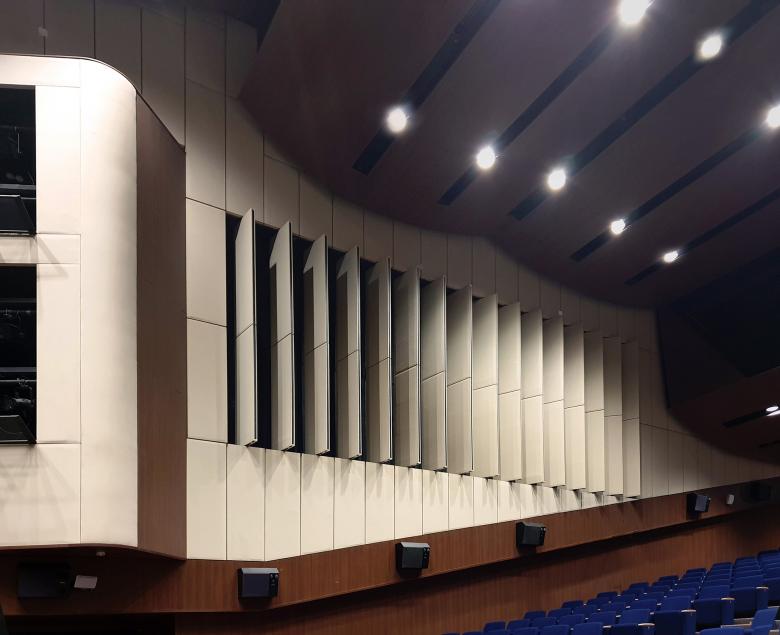 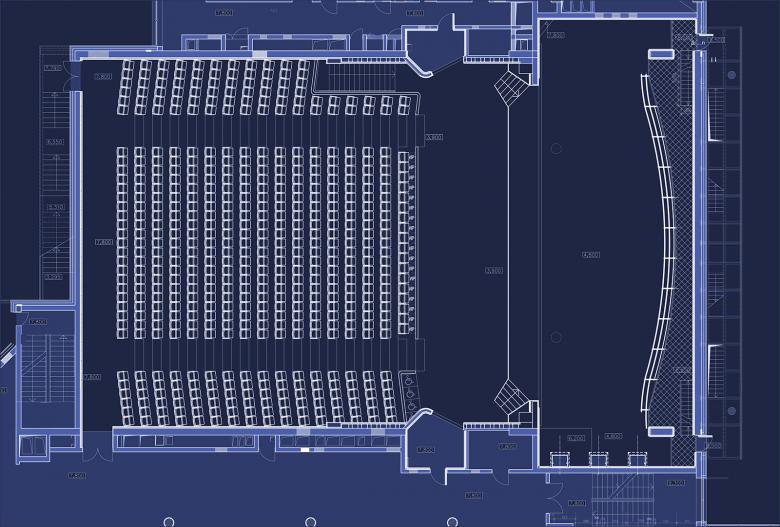 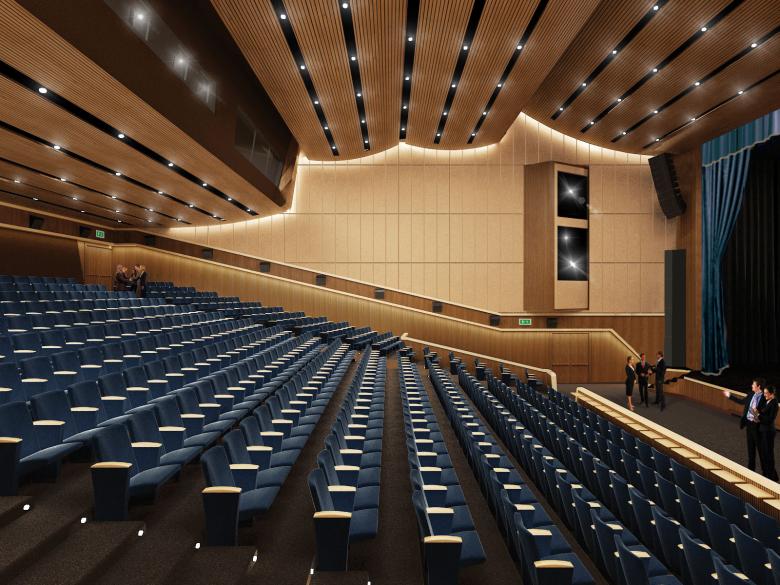 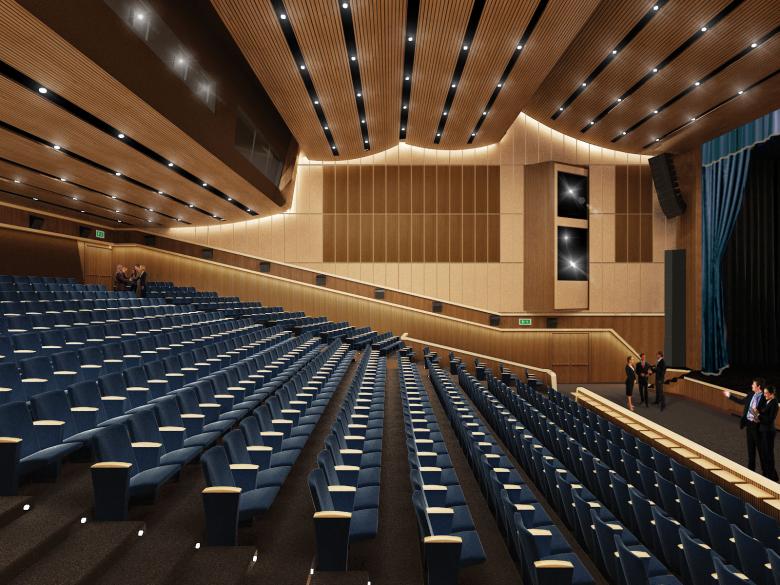 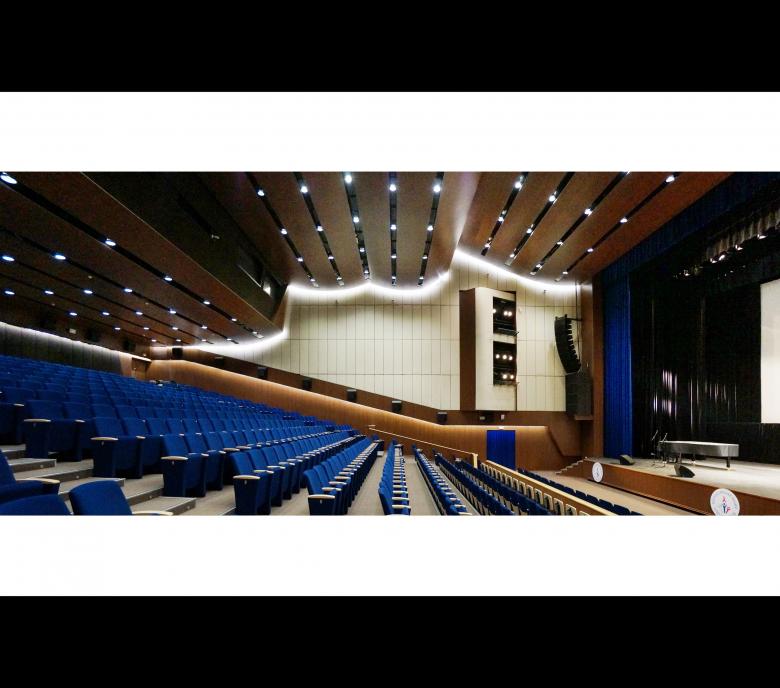 The new auditorium of the VGIK University, known as Gerasimov S.A. Institute of Cinematography, the first film university in the world founded in 1919 in Moscow, was built inside the new university wing.

The interior design of the main 589-seat multifunctional room, the 250-seat experimental theater and two 100-seat movie theaters was developed by the architect Paolo Lettieri and the team of Urbanism Planning Architecture Italy and the engineer's acoustic studio Marcello Brugola, both from Milan.

The university requested that the main hall could be used both as a cinema, the university's main activity and as a theater and concert hall.

It was not easy to achieve the acoustic performances of a room of this size that has optimal performance with such different refraction times.

The functional needs imposed by the University, such as the didactic lighting bridge over the stalls and a closed VIP room to attend the screenings and shows separately and the technical solutions imposed by the strict fire regulations have further complicated the scenario and made the project a greater challenge.

The optimal acoustic and aesthetic solution was found by modeling the ceiling in wooden panels with partially reflective round shapes, effective for controlling sound reflections and engineering an innovative rotating panel system on the walls of the room.

The rotating system panels controlled by software allows to vary the acoustics of the room: going from a situation of sound absorption typical of cinema halls, to a situation where the walls reflect the sound like in a concert hall and a theater.

The walls of room a were made with panels with wooden frames covered with Trevira stretched fabric and filled with absorbent padding; some of these panels can rotate on themselves by 180 ° so as to be able to change the acoustics of the room: the side in stretched fabric for cinema use while the side with the face in wooden panels for the concert and theatrical use of the room.

The curved suspended ceiling, another focal point of the project, was designed and built with Topakustik panels mounted on curved metal ribs with a fixed geometry of 5 meters in radius. This is the first project in which the technique of Topakustik panels curved on these dimensions was used. The false ceiling has been designed with curved shapes to control the reflections of the sound waves, so as to have optimal acoustics in all places in the room. The lights, the air vents and the terminals of the sprinkler systems have been inserted in horizontal cuts in the false ceiling, so as to give a uniform design to the technological elements.

Above the rear part of the seats are the projection room, the control room and a special private room to watch the film screenings. There is an important bridge over the false ceiling with manually operated lights for educational needs. The audio video system has been integrated with the lighting system of the room with the DMX protocol..

The variable acoustic room, after several stops during construction, was finally inaugurated by the Russian President Putin and in a short time it became the ideal venue for many festivals and artistic events in the Russian capital both for its acoustic qualities and for the flexibility of use and for the recognizable contemporary design.