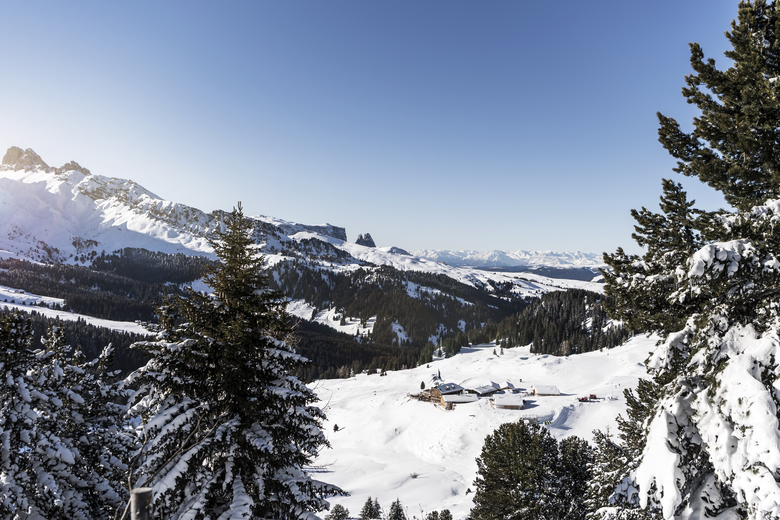 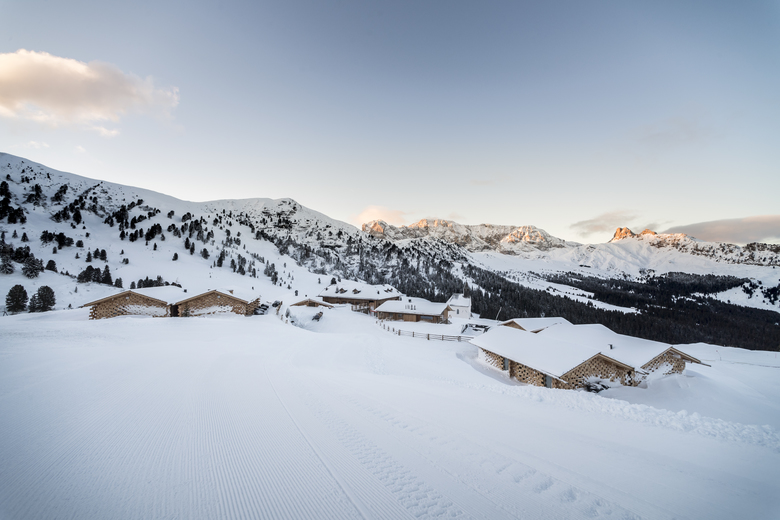 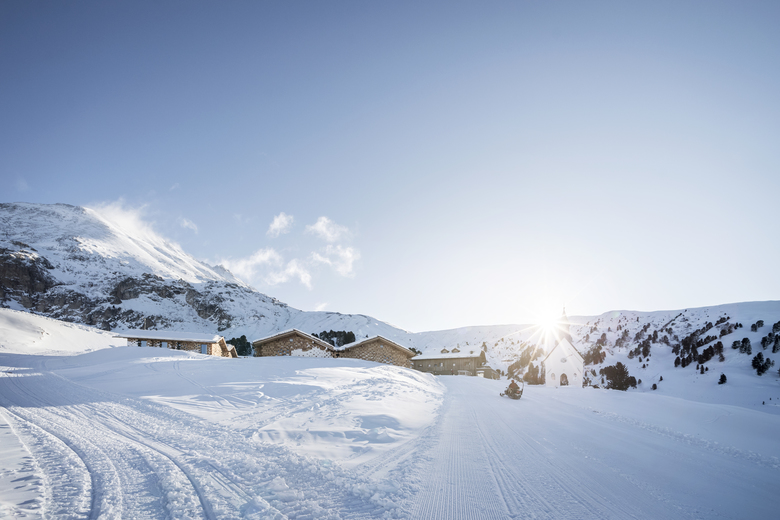 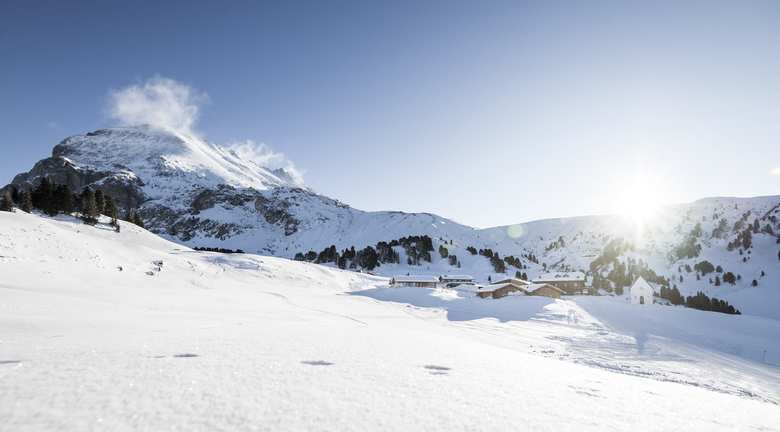 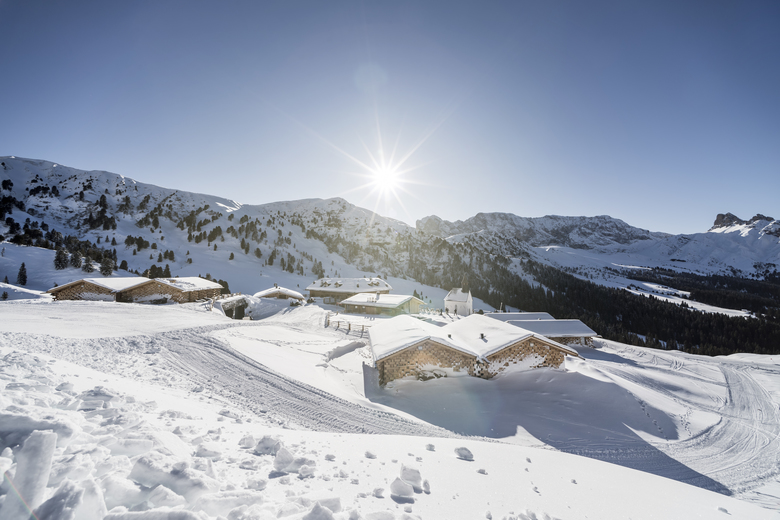 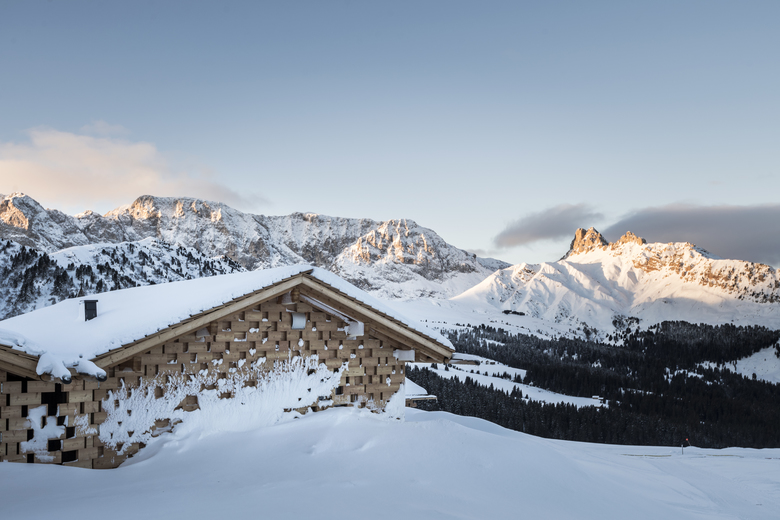 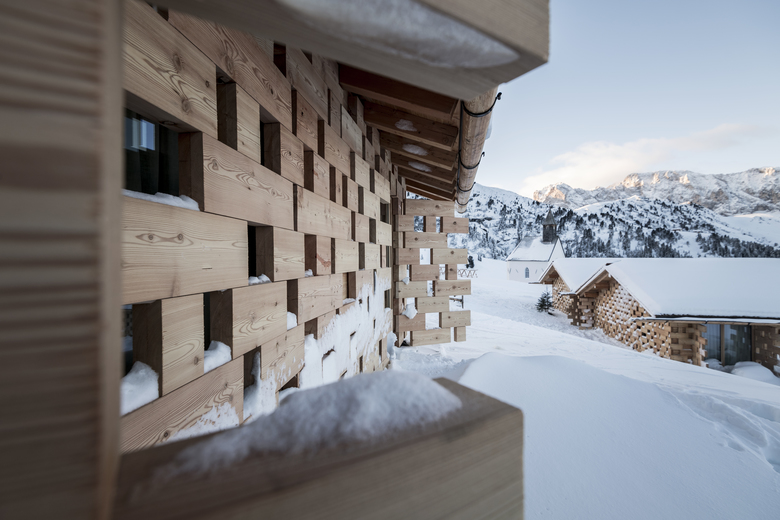 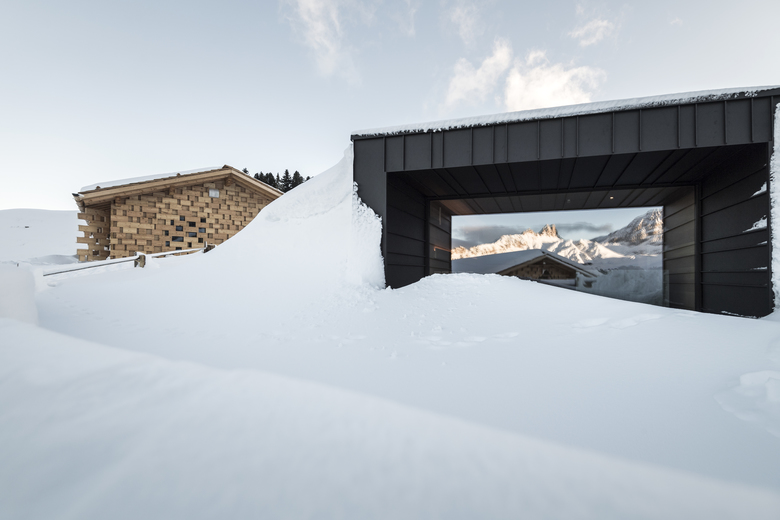 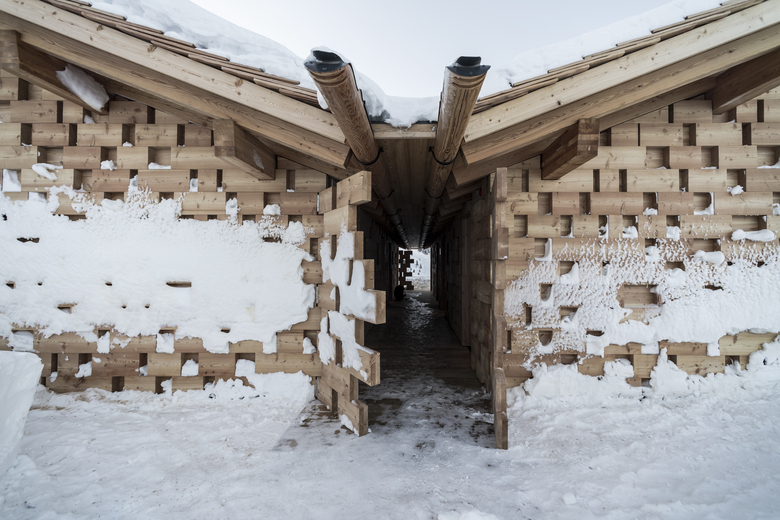 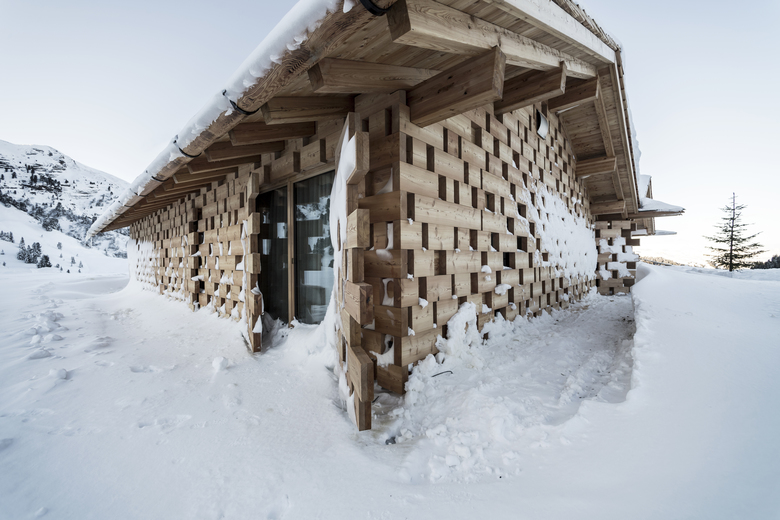 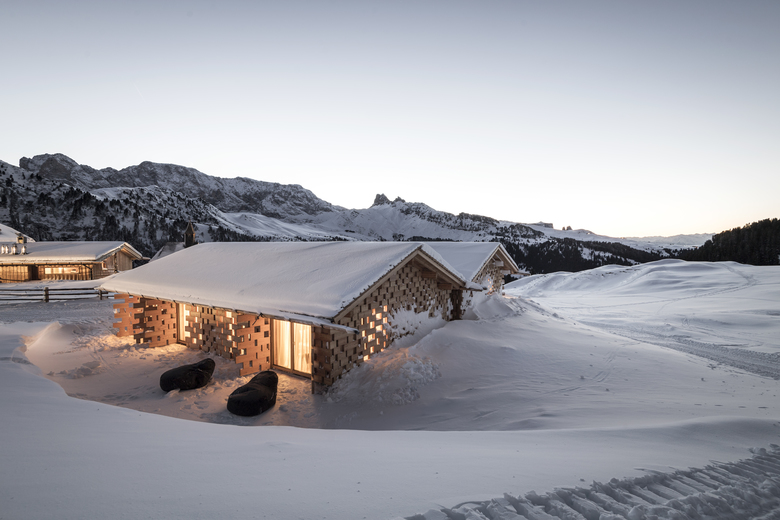 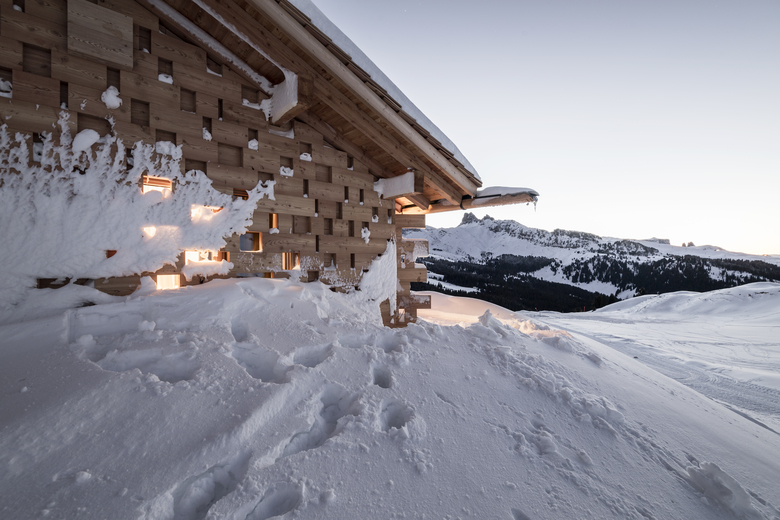 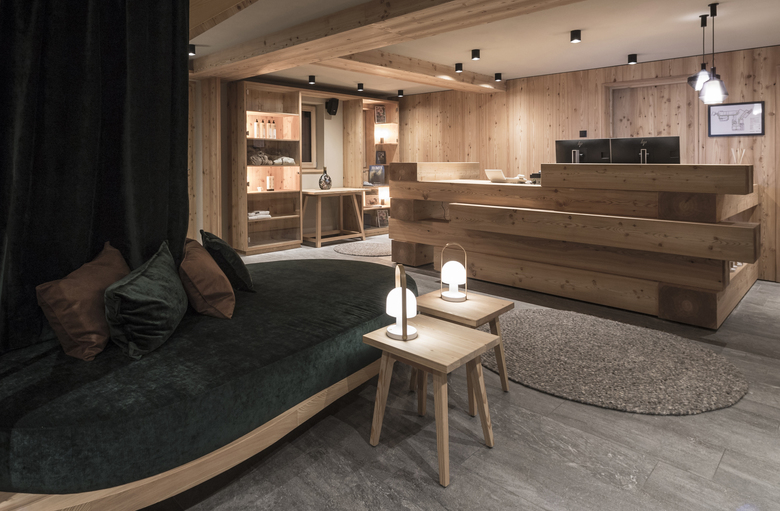 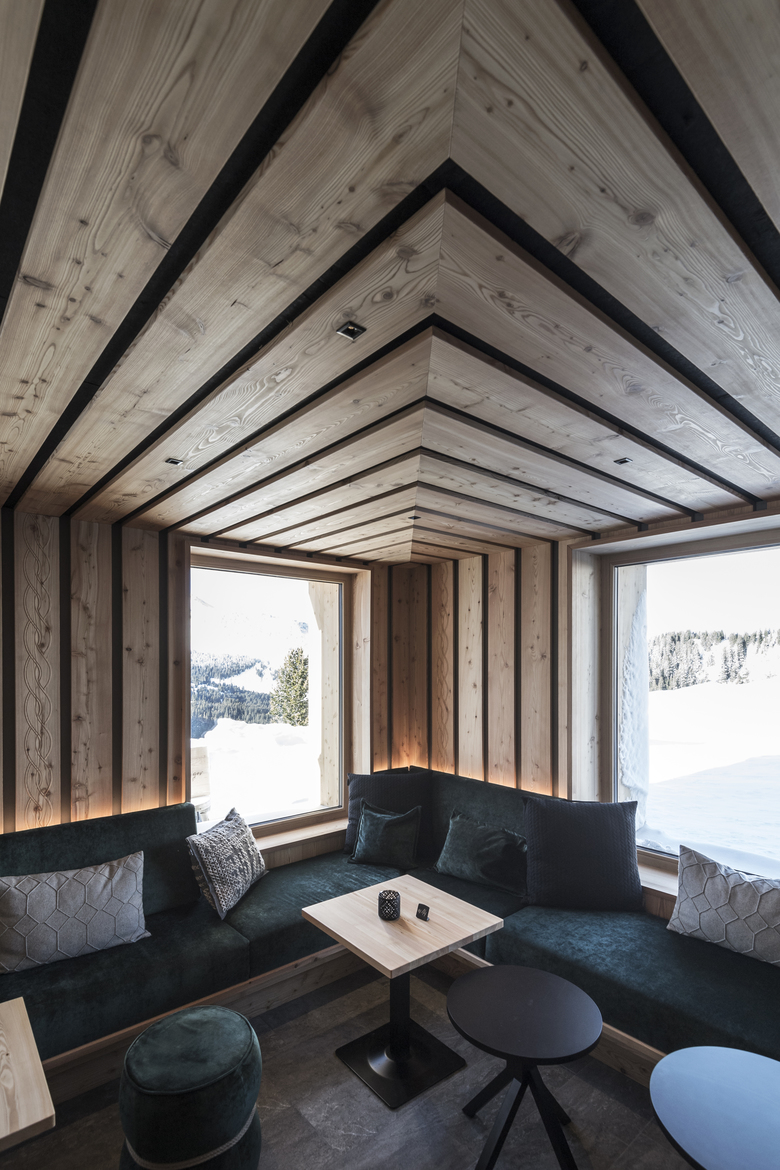 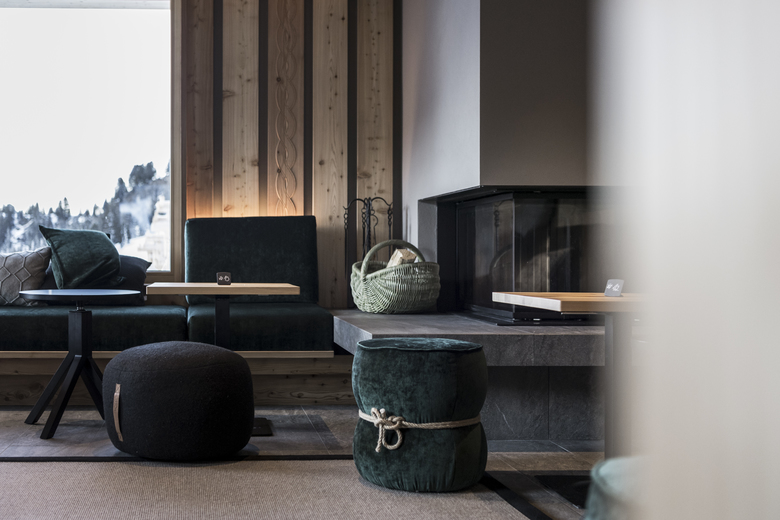 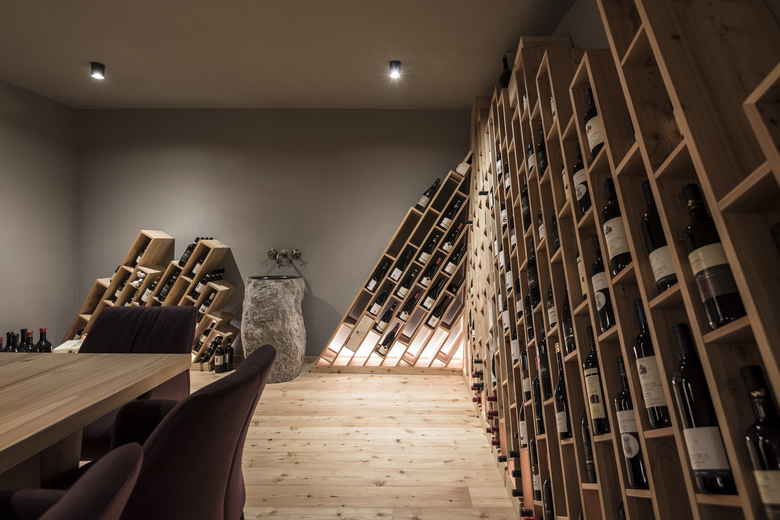 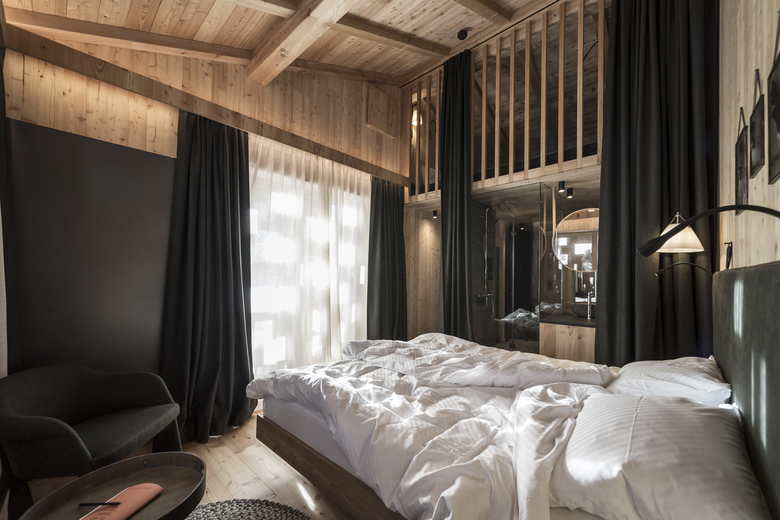 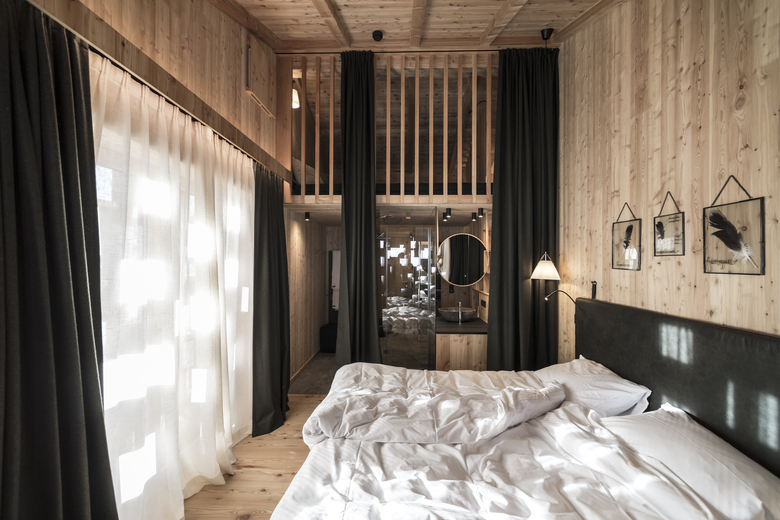 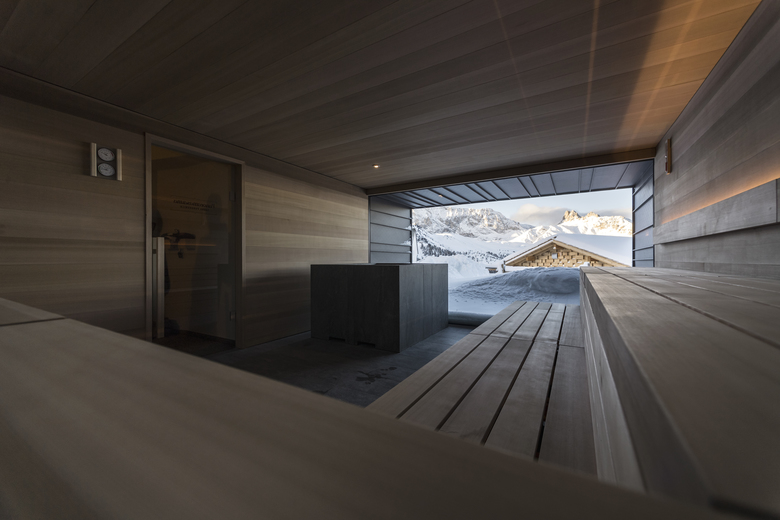 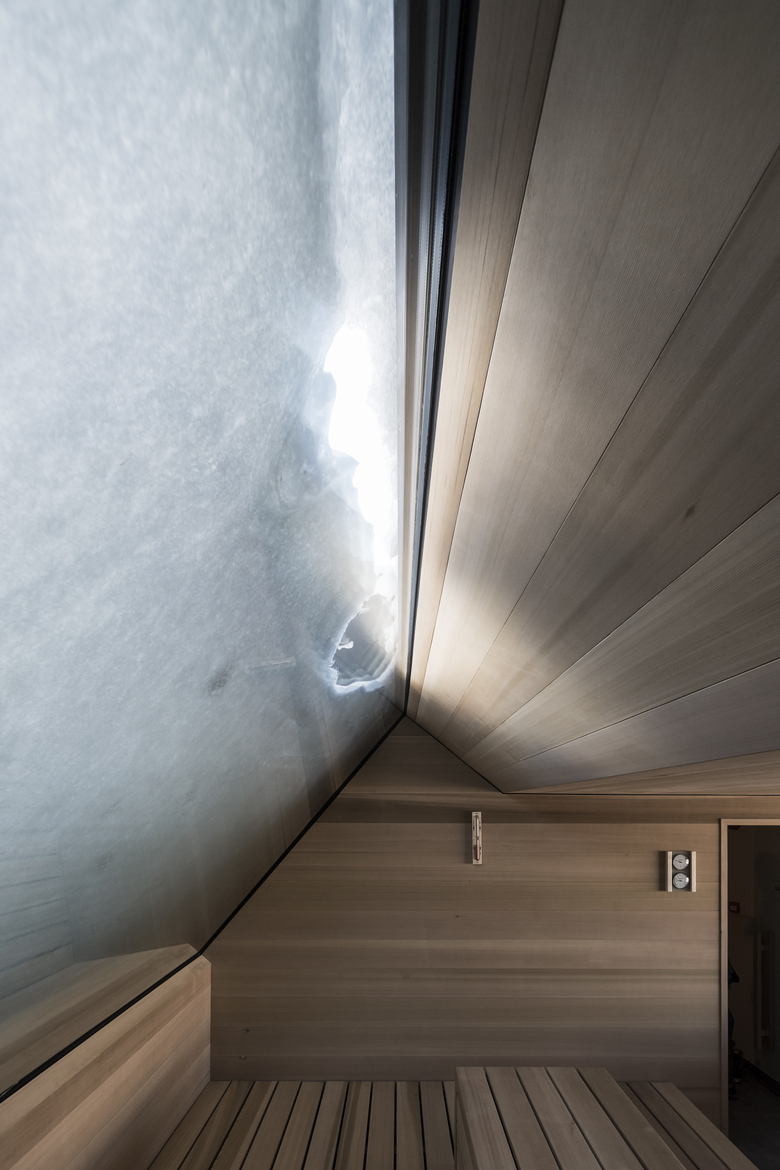 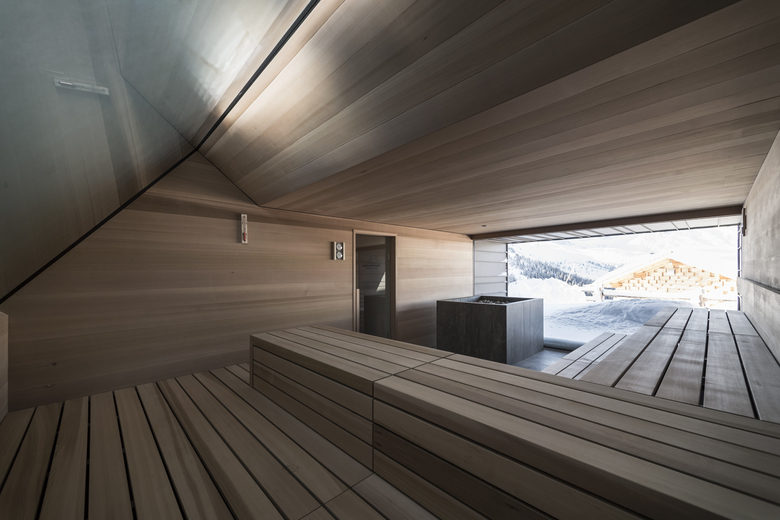 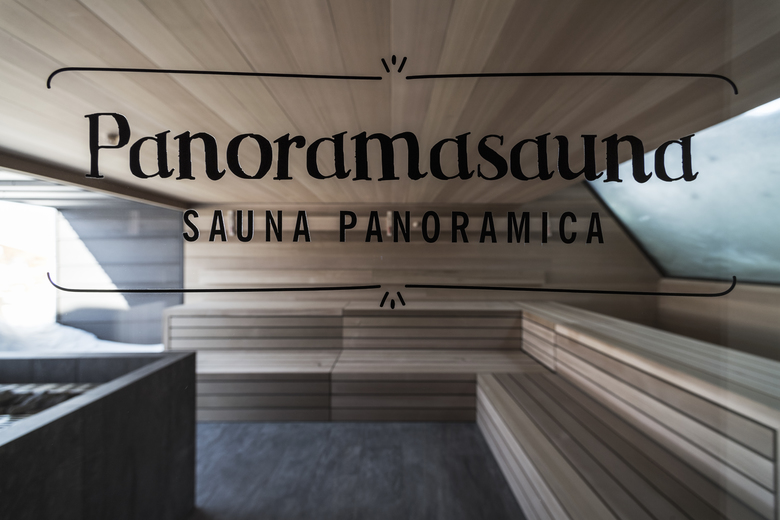 A scattered hotel at high altitude | With the renovation and expansion of the Zallinger Refuge at the Seiser Alm/ Alpe di Siusi, a new model of hospitality was born and serving as a good example of responsible tourism.

An example of a historical and landscape recovery intervention in a high mountain context. The nineteenth-century barns are reborn as mini-chalets, which bring back the charm of an alpine village. The South Tyrolean tradition is combined with comfort, quality of design and sustainability. The ClimaHotel was built with maximum environmental protection in every aspect of the construction. The project, designed by noa*, an architecture studio in South Tyrol that has long been committed to developing innovative models of receptivity and green tourism (they were recently included by Dezeen in the short list of the 20 emerging international architecture firms for the year 2018).

The aim was to improve the quality and accommodation capacity of an old high mountain hotel structure without altering the delicate landscape and environmental balance, while at the same time creating aesthetic value and sustainability. This was noa*s (network of architecture) goal in the planning and expansion of the Zallinger Refuge in the Alpe di Siusi area.

The project, completed in 2017, has created new spaces without altering the existing volumes, and at the same time has returned to the historic settlement with the characteristic of the original small village. Through the solutions and materials adopted, the magic of that era was brought back to life, in both respect for the environment and traditions.

Architect Stefan Rier explains:
"In this project we have also tried to bring out that strong relationship between architecture and context, which characterizes all our works. We want to propose new models of life and hospitality that on the one hand recover traditional forms and materials, on the other hand express quality of design, high levels of comfort and sustainability. The alpine environment is a complex and fascinating system that must be understood and respected. We think it's important to think of new spaces and ways to inhibit it: environments on a human scale, comfortable, welcoming, but above all unique and authentic".

The Zallinger Hut was first built in the middle of the 19th century at 2200 meters, below the Sassopiatto. It was formerly surrounded by seven barns and a small church. Subsequently the barns had been replaced by a single large building (1880), which over time had assumed other functions. The extension was an opportunity to revive the original structure, proceeding, as well as the restructuring of the central body of the hotel, the demolition of the former barn and the construction of seven new chalets arranged respecting the original plan of the site.

Noa*’s aim was to recover the traditional structure of the South Tyrolean mountain pastures in a modern way, which resulted in the design of the new chalets. The external claddings that surround the chalets are made of blocks of solid wood appearing to be stacked together in an alternation of full and empty spaces, becoming a dominant motif of the new settlement. The outcome, inspired by the structure of the ancient barns, avoids the annoying reflections of the exposed windows, inappropriate in a high mountain context. The wooden panels are designed to be able to open at the large windows, providing a view of the spectacular alpine scenery, while when they are closed create evocative light and shadows in the rooms, contributing to the relaxation of hotel guests.

Sustainability, respect for the mountains and direct contact with nature are the principles that have guided all design choices. For example, in the design of the new rooms, careful use of the space was made to provide high levels of comfort in relatively small sizes; the roofs wood shingles, typical of the South Tyrolean tradition, were used; all the materials have been certified and the complex of buildings, heated by pallets, has obtained the Clima Hotel certification. It was even decided not to illuminate the paths connecting the chalets and the shelter, to avoid light pollution and allow guests, equipped with lanterns, to admire the charm of the starry sky.

It is significant that along with the refurbishment of the Zallinger Refuge, a plan has also been launched to minimize the flow of cars in an area that has seen strong visitor growth in recent years. Starting in 2014, the Zallinger property, with the support of noa *, involved the managers of 6 other refuges in the area in the construction of a single collection point for the guests' cars located in the valley. This structure is nearing completion, but already in 2017 the arrivals to the guesthouses occur only by bus or, in winter, with the 'snow cat'.

A BIT OF HISTORY
The Zallinger Hut is over 160 years old. It was built by Karl von Zallinger-Stillendorf, a prominent figure of the era in South Tyrol, who bought the land in 1854 and in 1858 added a chapel next to the shelter. At the time the area was called "Sassegg", which means "the high ground on the big stone", with reference to the Sassopiatto, the mountain that overlooks the hut. In 1933, Anton Schenk - future mayor of Laion, a small town at the entrance to Val Gardena - bought the building, which he then gave to his daughter Zita on her marriage with Hans Schenk-Trojer. On the death of his wife, Hans continued his activity as a hotel entrepreneur first alone and then, starting from 1990 in collaboration with his second wife, Luisa Schenk, from Castelrotto, a famous Dolomite village in the Alpe di Siusi area. In the 90s the Zallinger shelter was renovated to meet the needs of a more modern hotel accommodation. When Hans dies in 2010, the legacy of Zallinger passes into the hands of his wife Luisa and his nephew Markus, who still today passionately renew the hospitality of the historic South Tyrolean refuge.

THE NEW ENLARGEMENT
Noa*’s architectural plan added 24 rooms in the new mini-chalets and left the original 13 rooms, which were already available in the central building of the guesthouse. The chalets are always in pairs. Each chalet has four rooms, not connected, which is accessed by a shared distribution corridor. Privacy is thus guaranteed.
From the constructive point of view, each unit rests on a concrete plateau, which has been contructed with prefabricated methods in wood starting from a 'custom' engineering by noa*s architects. In this way the construction site has had minimal impact on the environment, both in construction time on site, as well as the transportation of materials. The esthetics, for both the architecture and interiors are characterized by the constructive wooden walls, giving a modern “log-cabin” feel to the space.

The interior of the rooms is cosy and warm with a modern mountain-lodge character. The materials are inspired by the traditional hunter’s clothing; cushions with knitted details and felt. Some rooms have a small loft that can be used as a bedroom for kids or just a relaxing corner.

The sustainable mission of the project is also expressed in the fact that the property has renounced the '4 Stars' classification of the hotel, in order not to increase the volume of the building to the detriment of a negative impact on the landscape: Zallinger's challenge is to offer a receptivity luxury through the quality of the spaces and services without increasing the surface square meters in a macroscopic way.

THE PUBLIC SPACES AND THE RESTAURANT
The central body of the historic lodge has been maintained but completely redesigned in the internal layout of the ground floor: the new interior design incorporates the reception, the lobby, the lounge and the restaurant.

The restaurant and the lounge area have been designed to accommodate external guests as well: many skiers stop for lunch, seeing as the refuge is located on the main ski slopes of the Alpe di Siusi mountain range, while the lounge is very popular during the evenings. However, hotel guests can count on a more private and familiar area, which is focused around the large fireplace.

All the built-in furnishings were designed by noa* and customized according to the style and space, combined with a refined choice of furniture to complete the new design. A good example can be seen in the tables (from Billiani) of the lounge area that can change height: thanks to an up-and-down mechanism of the support legs, they are transformed into tables where once can dine in comfort.
The walls are covered in wood, with the idea to recreate the atmosphere of a traditional “stube” - the classic alpine room where once the family gathered around the fireplace - but with the contemporary sign of the wooden boards that seamlessly rise from the walls and on to the ceiling, behind which, sound-absorbing panels have been positioned to create maximum acoustic comfort. The choice of using a felt flooring, a traditional alpine material that combines resistance and softness, also aims to the same result.

The bar area is characterized by a huge fir tree-trunk (local essence) as a counter: a solution that brings the presence of nature inside the building with its beauty, primordial strength and its complexity in structure.

Great attention has also been given to the lighting in this project. Precision in the functional aspect and careful design choice in the aesthetics (as in the bar lights produced by the Spanish company Marset).

THE WELLNESS AREA
The wellness area stands in place of the pre-existing barn, as an independent building, with a metal-plated structure branches out, that houses the sauna, an awe-evoking environment, from the spatial point of view, with two large windows overlooking the landscape: the first looks towards the valley; the second opens on Mount Sassopiatto, with an inclination of 45 degrees (to allow the snow, during heavy snowfall, to flow to the base of the frame, leaving the view free). A relaxation area with a small distribution of hot and cold drinks completes the range of services, adding to the sense of comfort.

WINE CELLAR
The design recalls the peaks of the mountains that rise towards the sky: the wooden shelves, in fact, create a sort of bookcase, characterized by inclined upright crafts of wood and elongated compartments that accommodate the individual bottles of wine (the refined choice of labels is personally selected by the sommelier owner).

FLOOR PLANS & CERTIFICATES
The heating and hot water supply are obtained through the installation of a pallet boiler, which guarantees 'zero impact' on CO2 in the atmosphere. A buried silo allows you to store the pallet during the summer season and then be consumed in winter.
The interiors are certified for a total reduction of the Radom indoor concentration.
The guesthouse and the new spaces have obtained the seal of sustainability ClimaHotel, the certification of the Climate House Agency of the Province of Bolzano that distinguishes the accommodation facilities capable of promoting sustainable development both through the integration of the most innovative and ecological technologies and with strategic measures in the management.