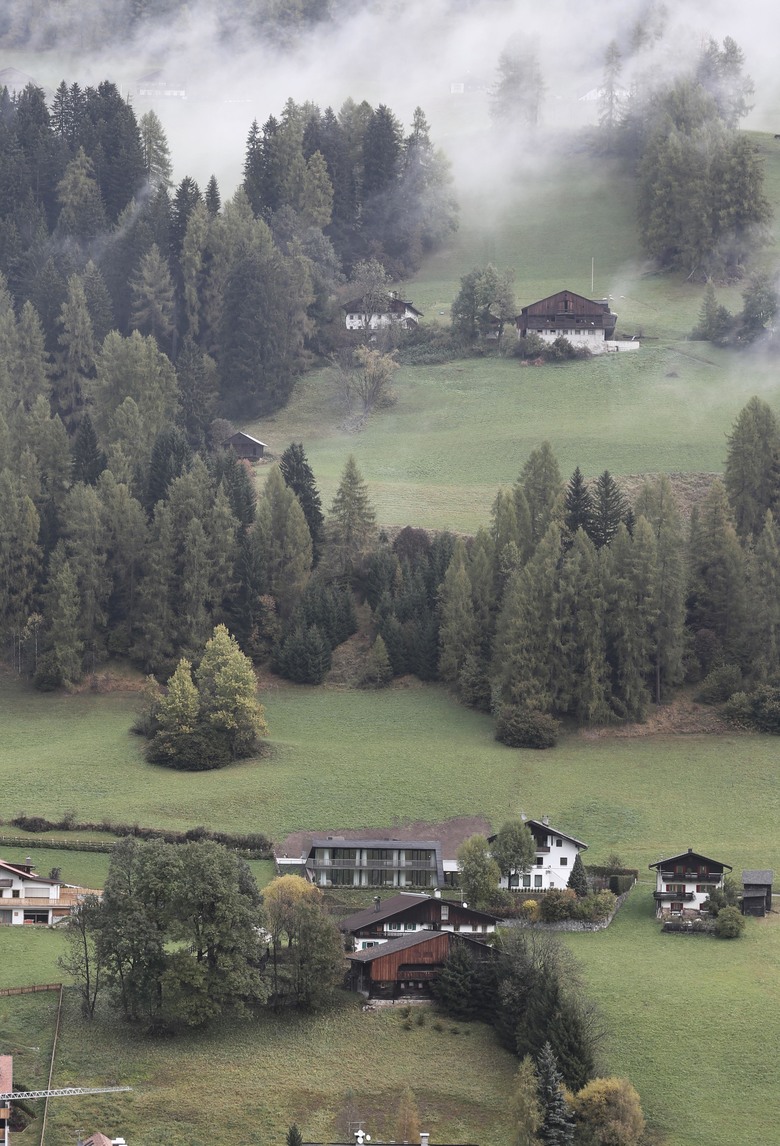 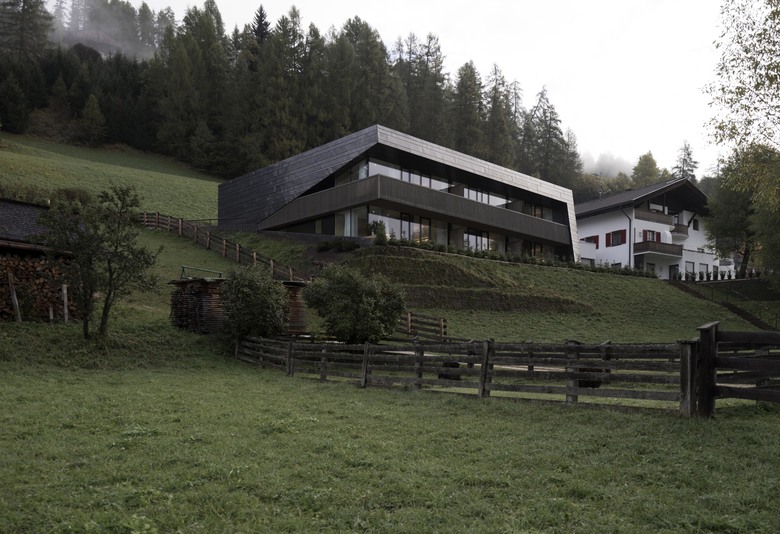 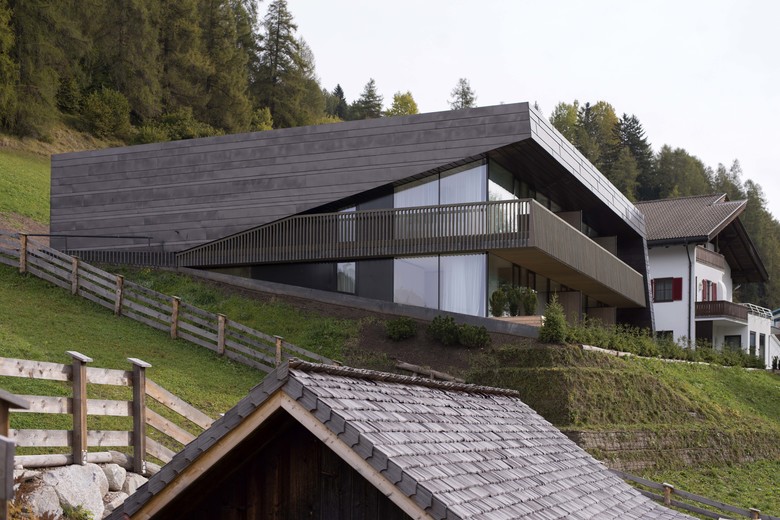 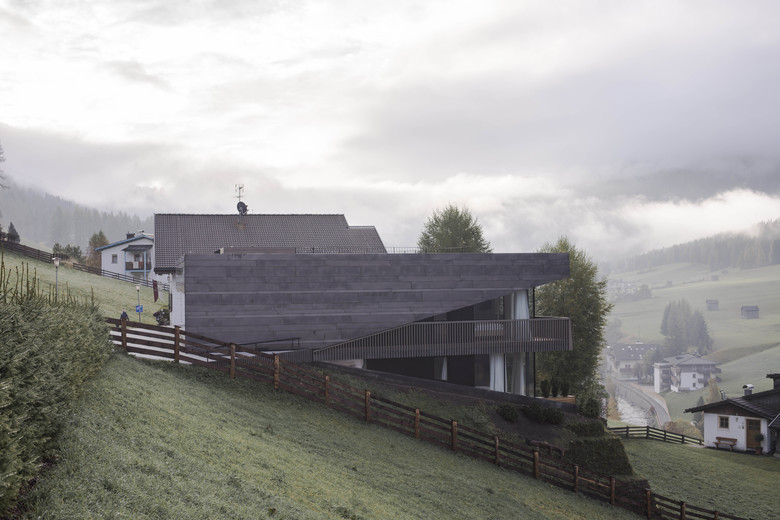 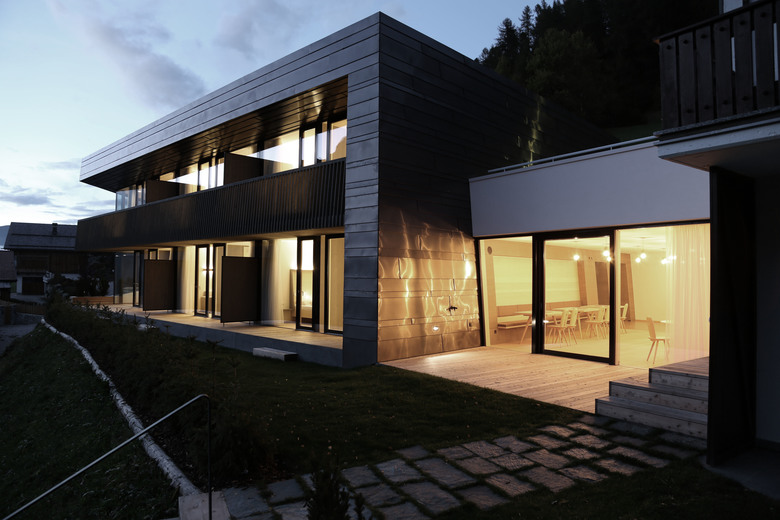 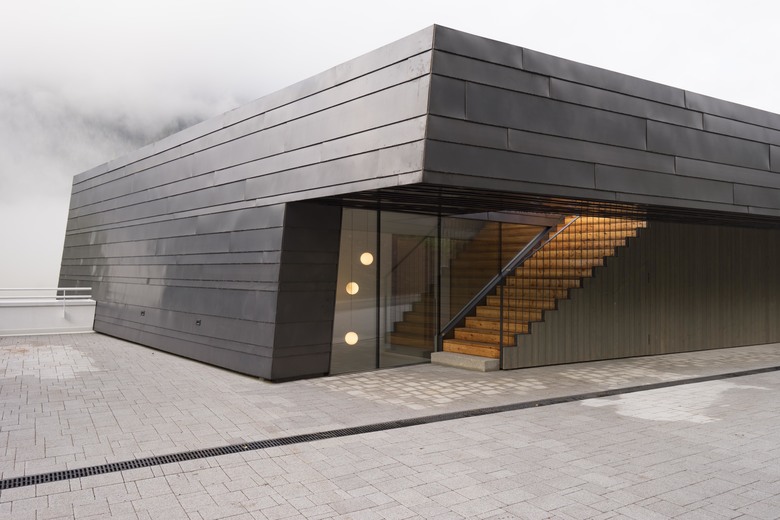 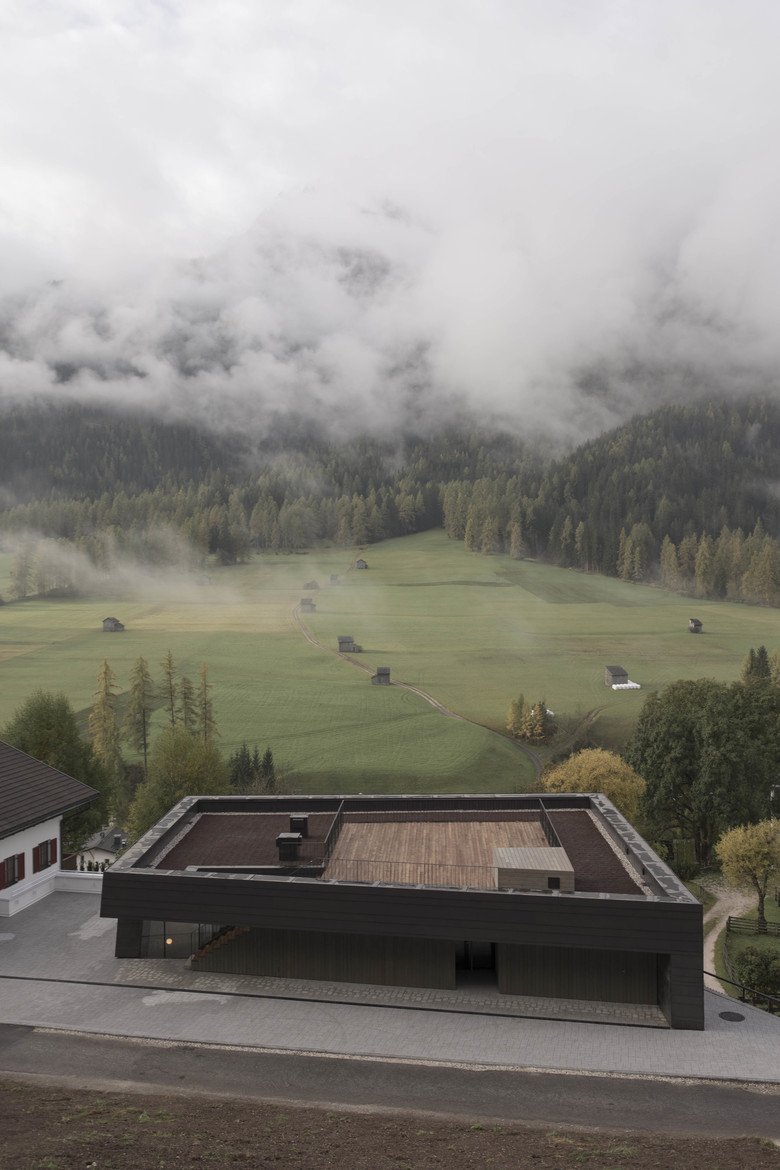 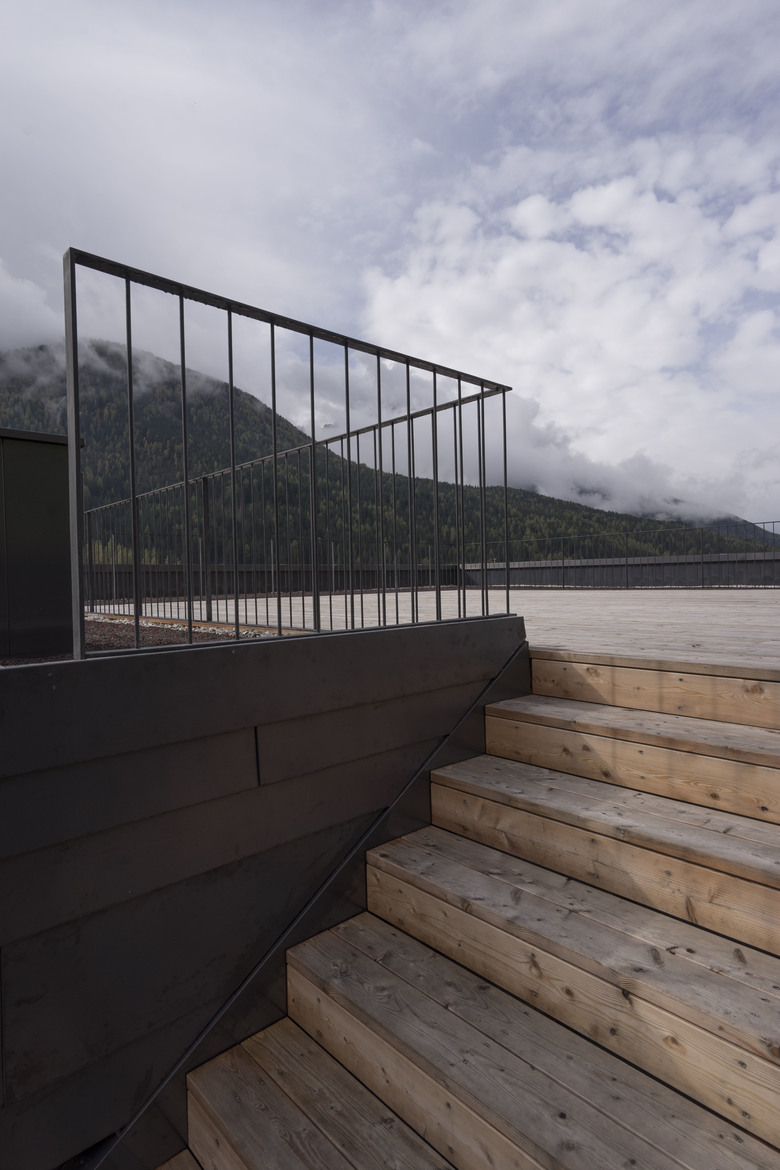 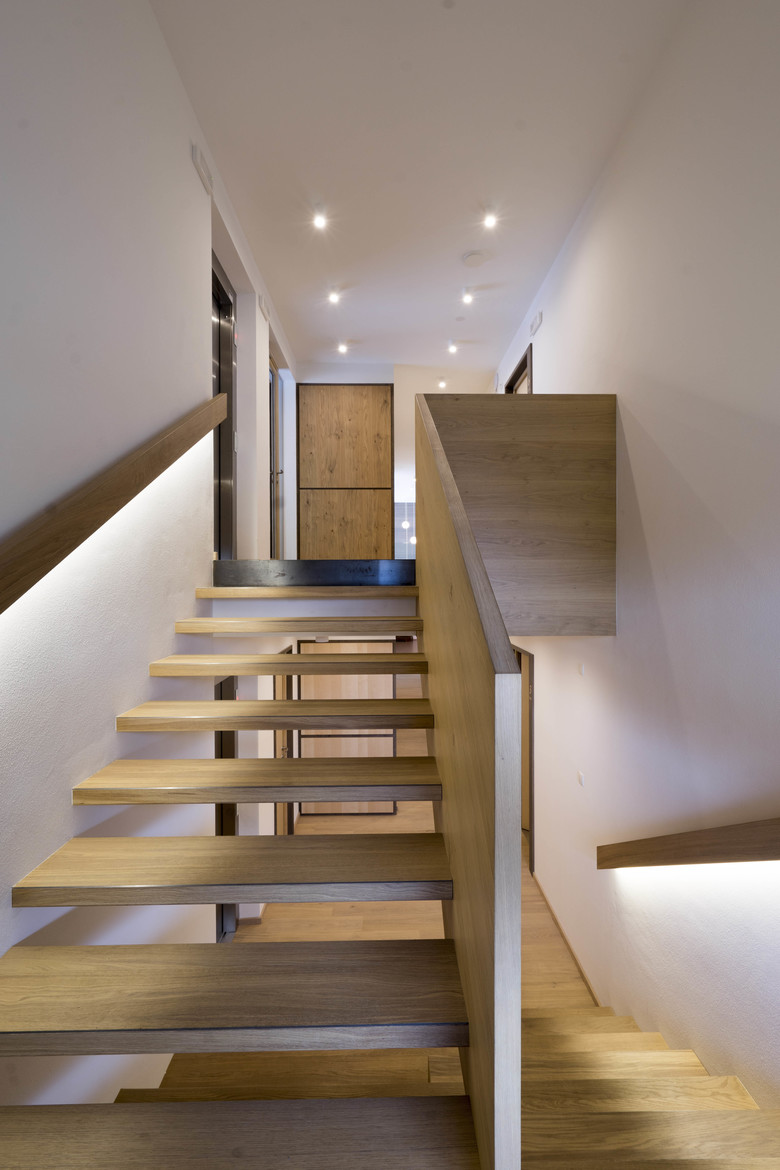 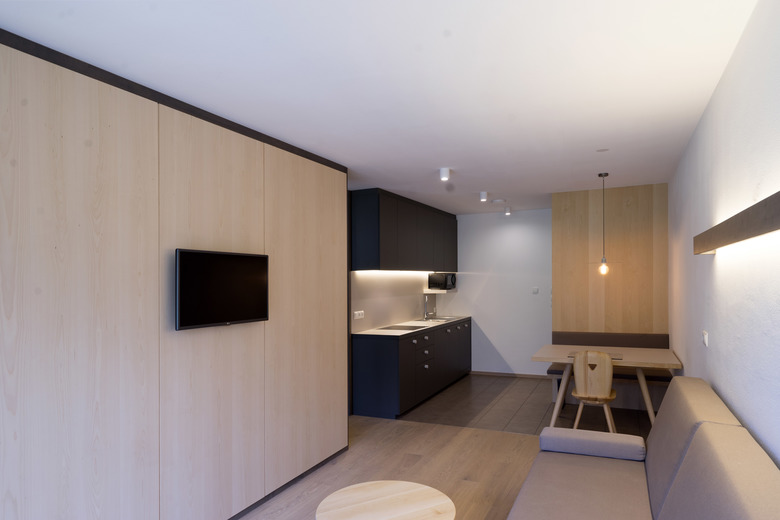 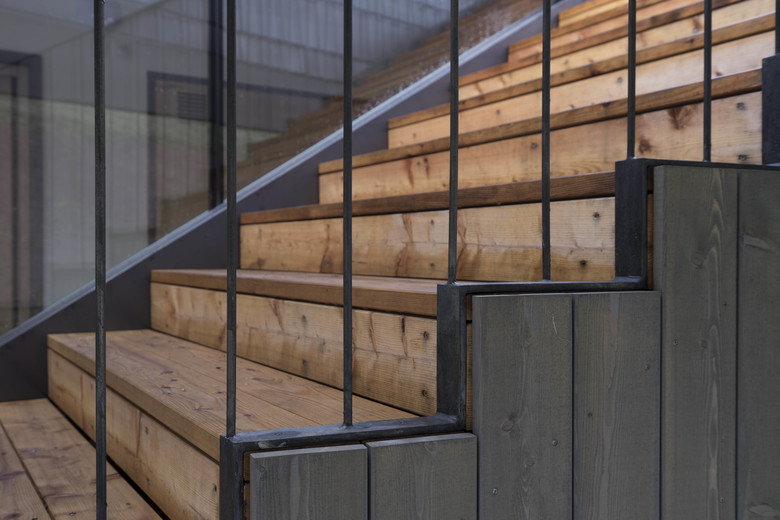 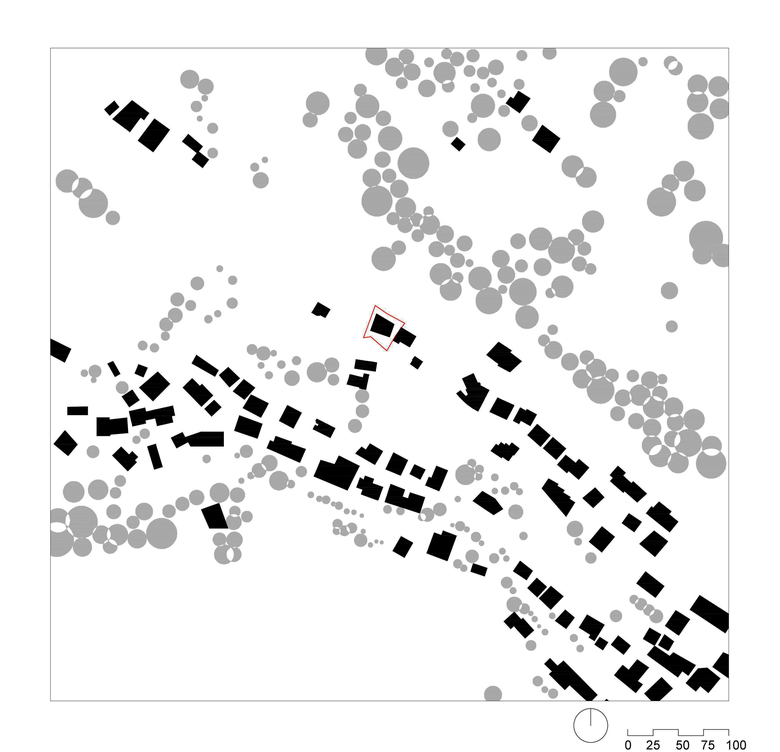 Residence Villa Drei Birken is located on a hillside at the end of a residential area in the Dolomites. The Villa, built in 1960 and renovated in the 80’s, originally consisted of a simple and low volume with owner’s apartment and four holiday flats. The new extension adds six holiday apartments as well as functional and common spaces. The facade opens through a V-shaped surface from the mostly closed North facade to the completely glazed South facade, facing the sun and the panoramic view of the Dolomites.

Although it is connected in the lower level to the existing villa, the new construction is designed to appear as a free-standing building. Perfectly integrated into the hillside thanks to its accessible extensive green roof with integrated terrace, the new volume occupies the full width the plot. It is slightly rotated in order to direct the South facade to the sun and the panoramic view. The joint in the lower level connects the new with the existing building and serves as common dining room. The East and North façades are relatively closed because of the interior’s functional distribution; furthermore, the North side is designed to show the clear separation between the new and the existing building. The volume is accessible from the street side, where also the car parking is located. The six spacious holiday apartments are directed to the sun, with panoramic view of the Dolomites.

Material
The new building’s envelope is made of only three main materials: it’s walls are clad with horizontal preoxidized copper sheets of various width while the Northern recessed area and the balconies are offset with larch wood strip boards. In addition, full-height glazing is predominantly employed on the Southern façade. The larch wood is treated with a pigmented graying solution of iron sulphate, in order to diversify the North service volume. Copper and larch wood are exposed to a natural change of colour caused by the atmospheric influence of sun, rain and snow; this phenomena, in addition to the repetition of the wooden colour code of the Villa, further increases the integration of the building into its context over time.

The interior is clear, simple and functional. It contains custom furniture in birch plywood, which is oiled or dark stained so as to be similar to the copper.
Particular attention was paid to improving the energy performance of the building, such as doors and windows with triple glass, controlled ventilation system, heating system connected to a wooden pellets district heating plant and heat-sound insulation with wooden fiber.