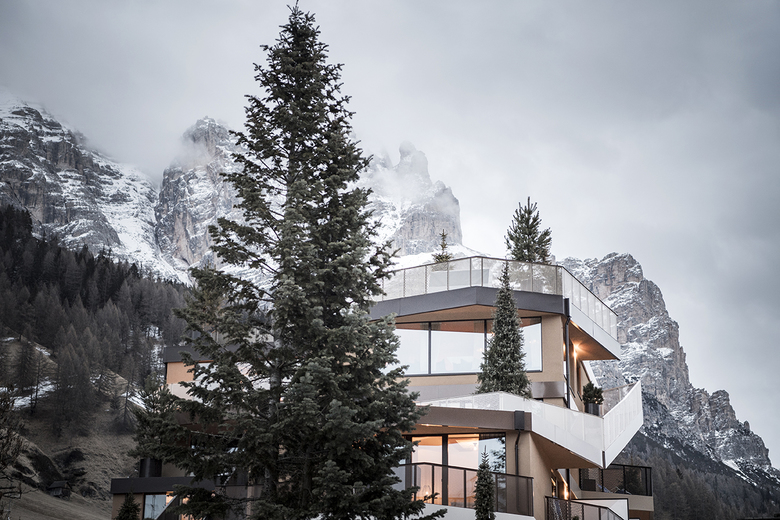 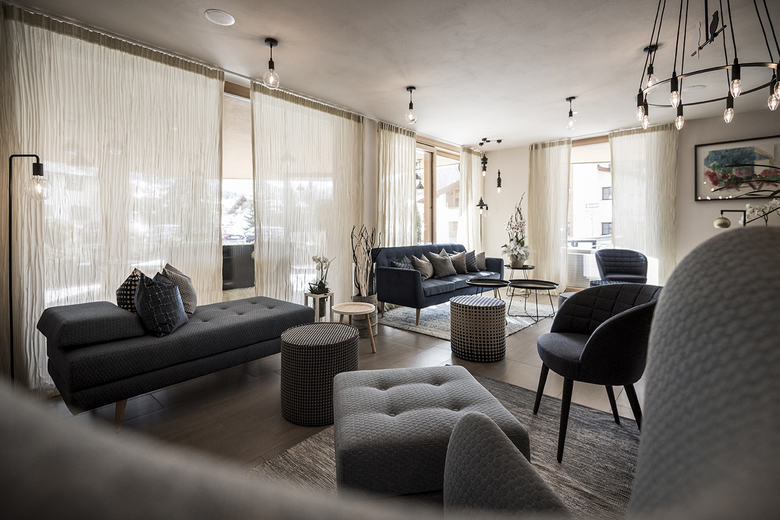 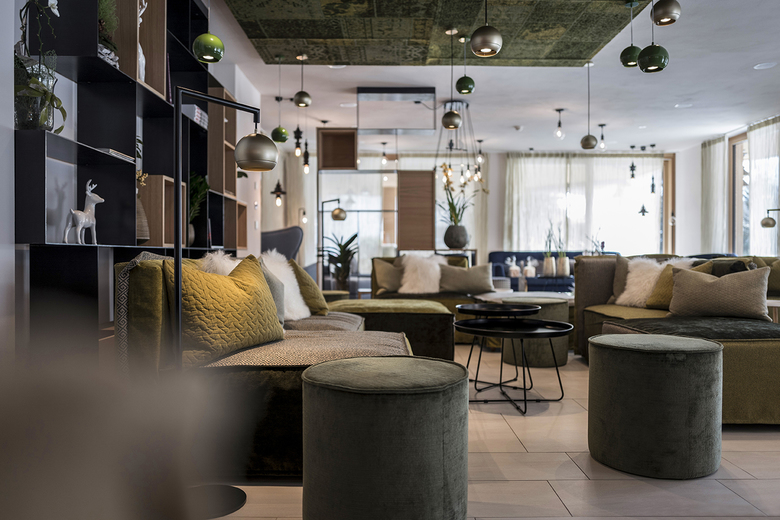 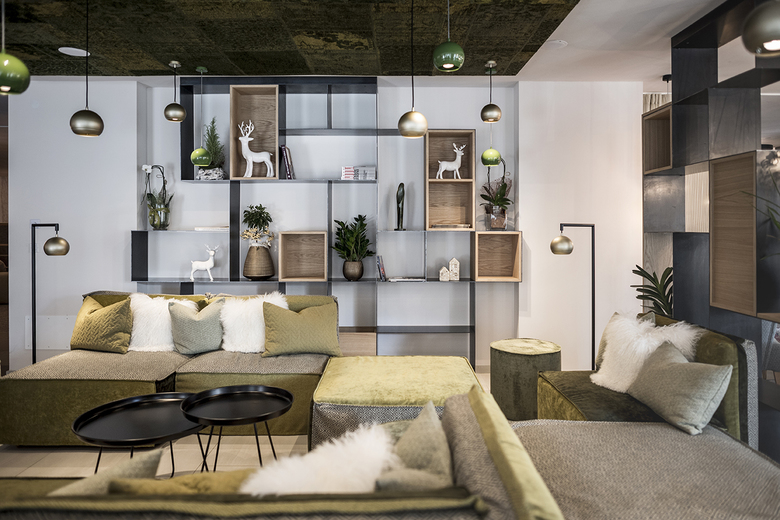 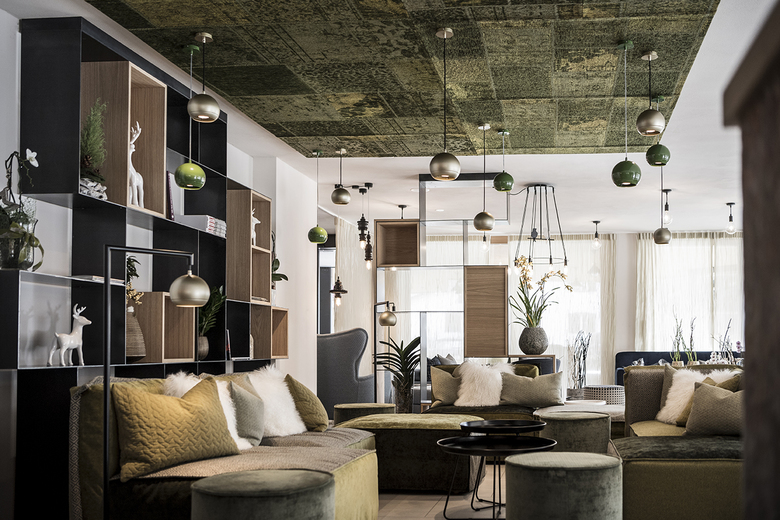 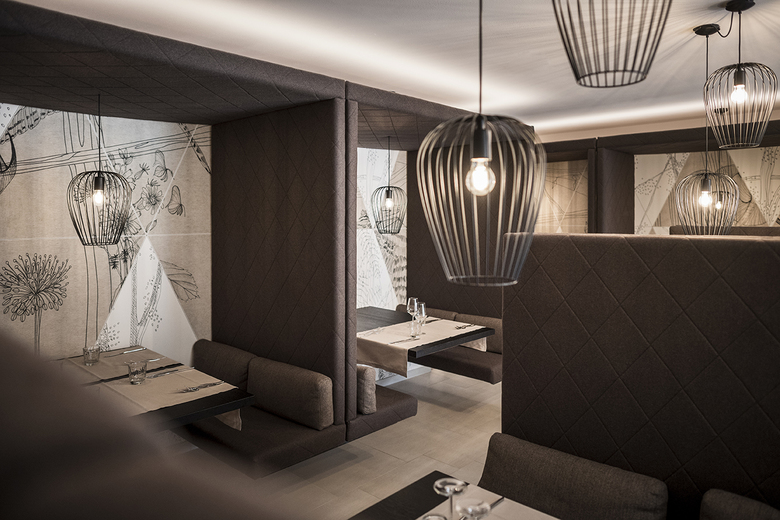 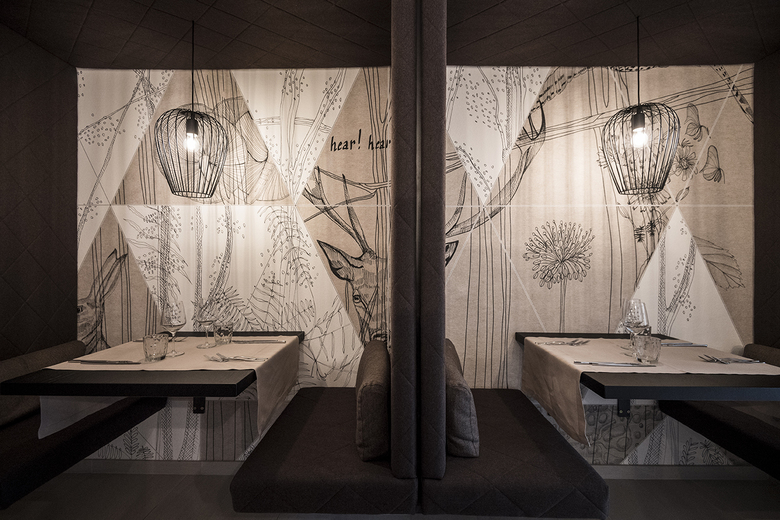 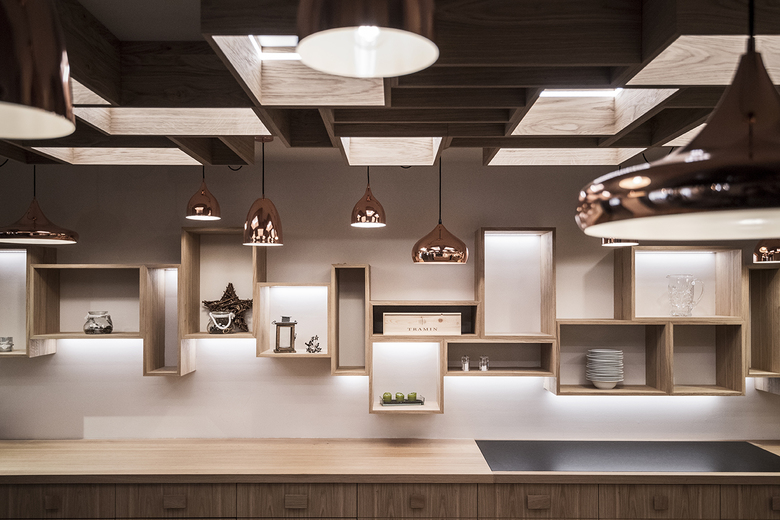 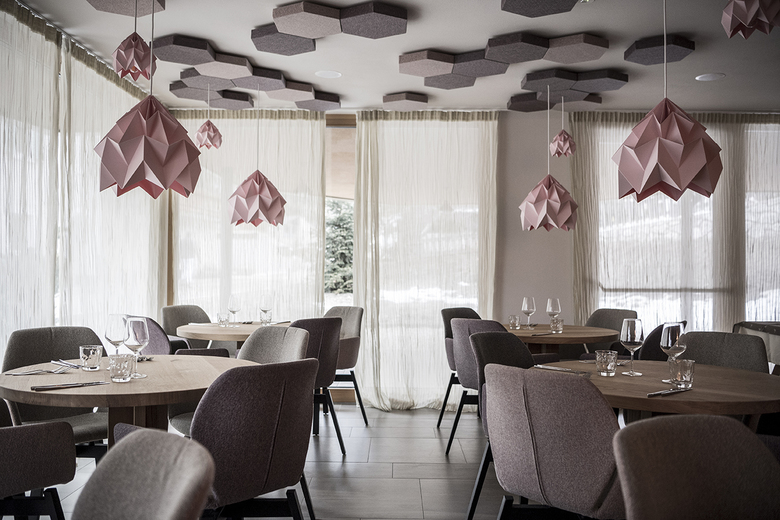 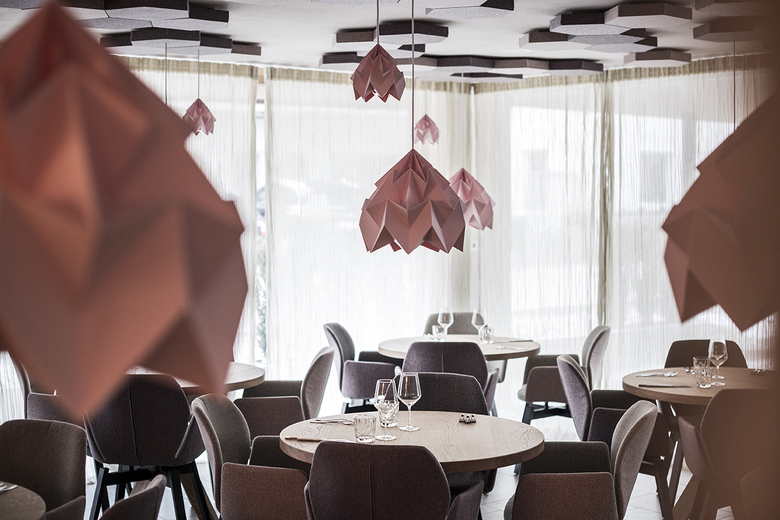 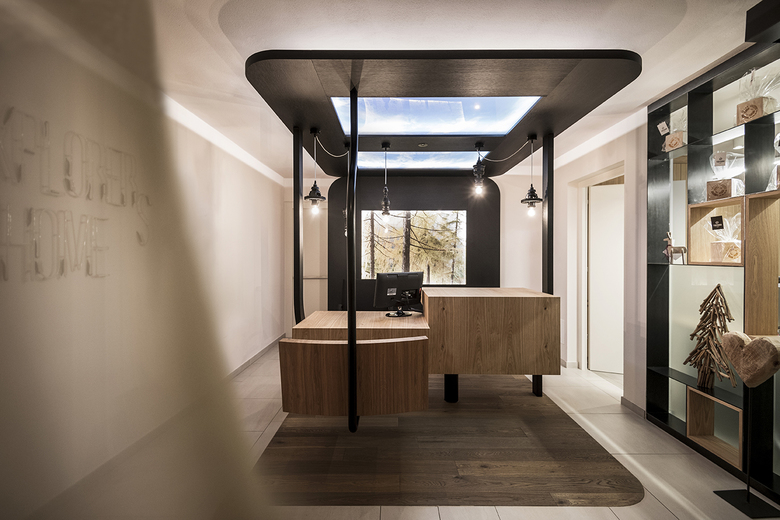 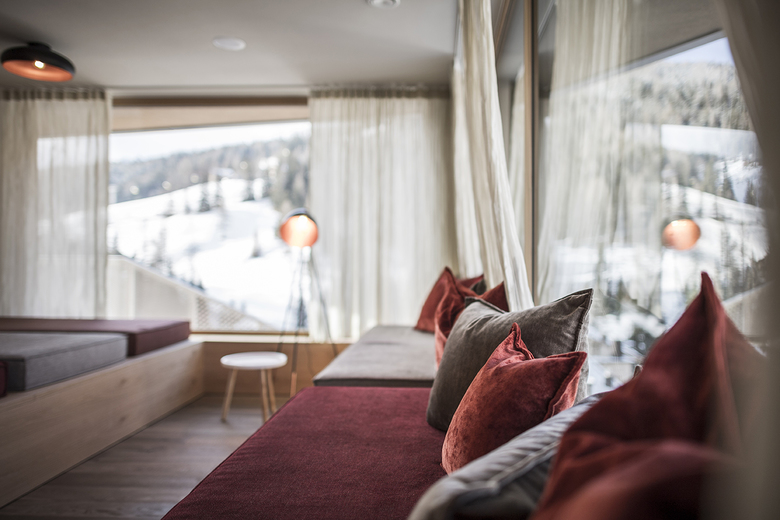 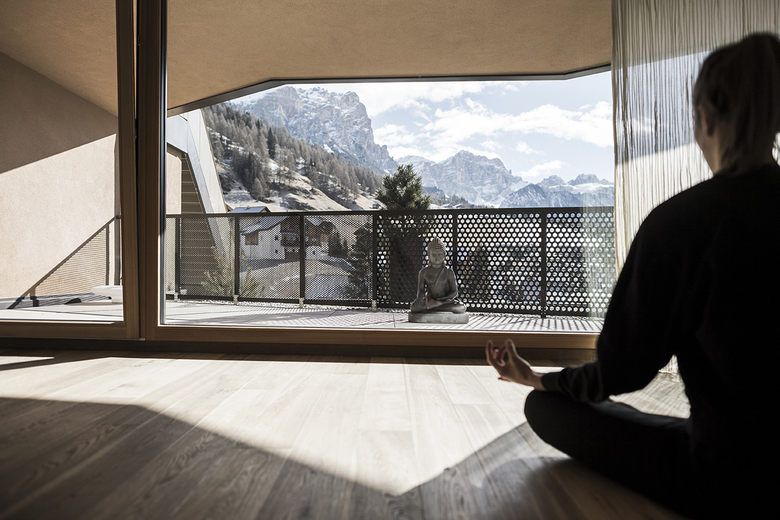 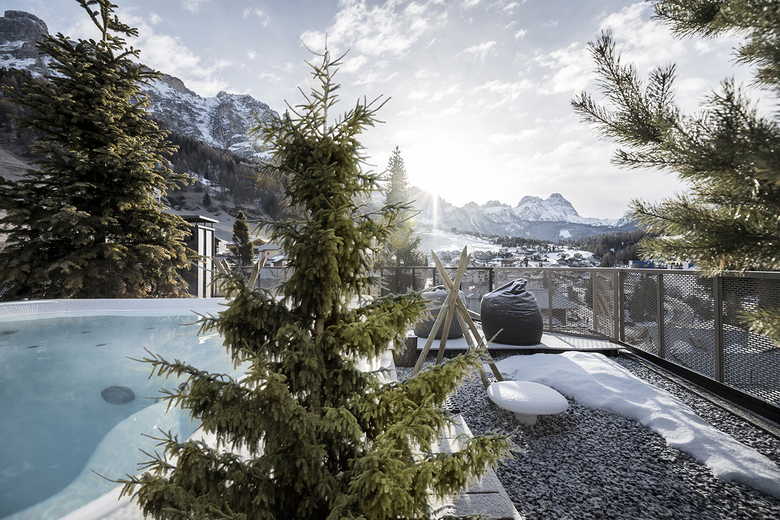 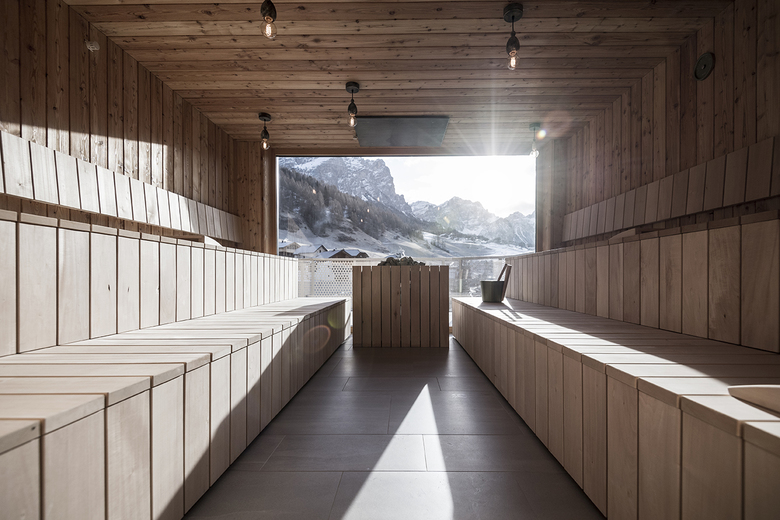 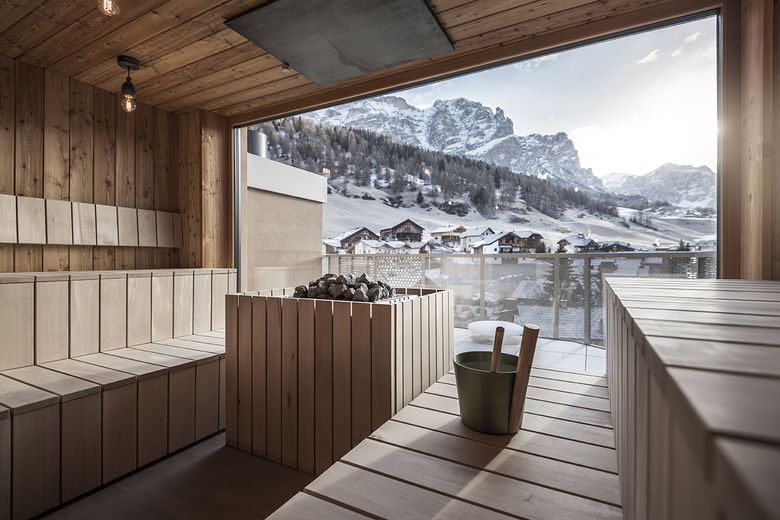 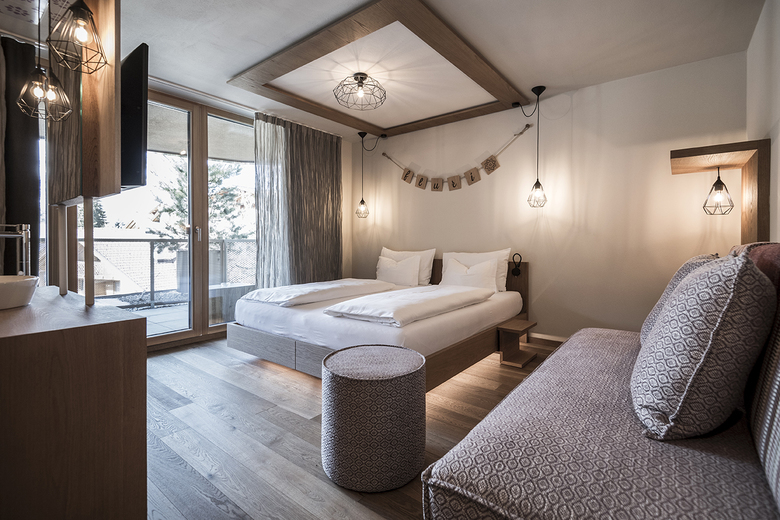 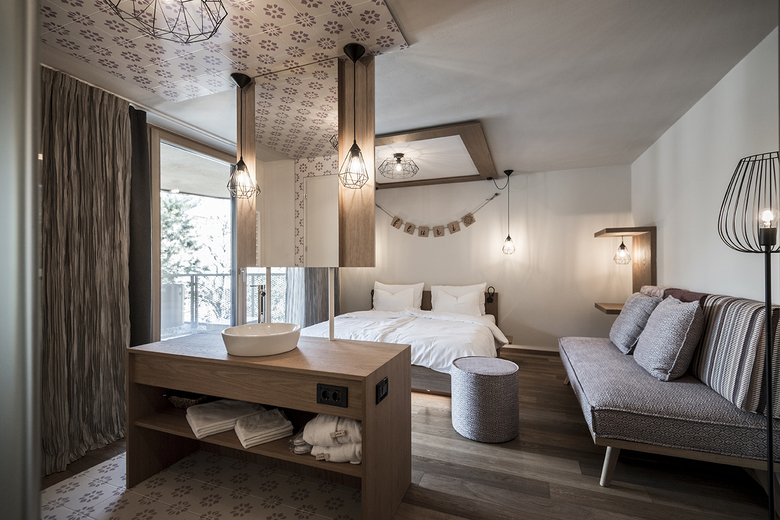 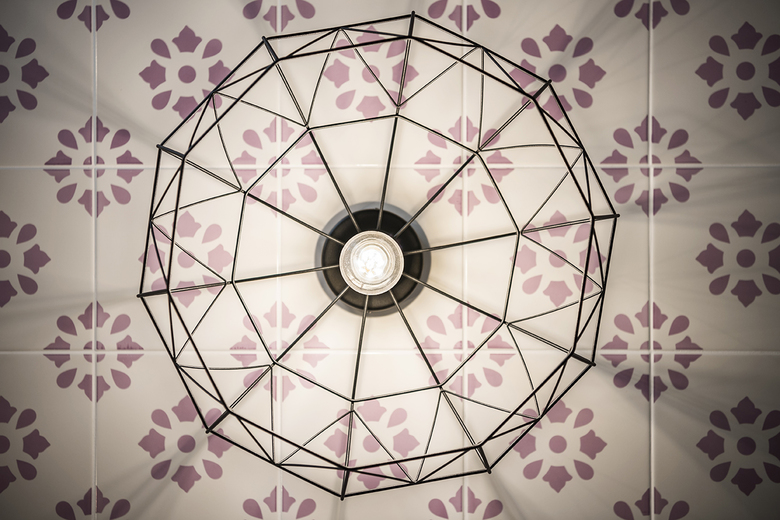 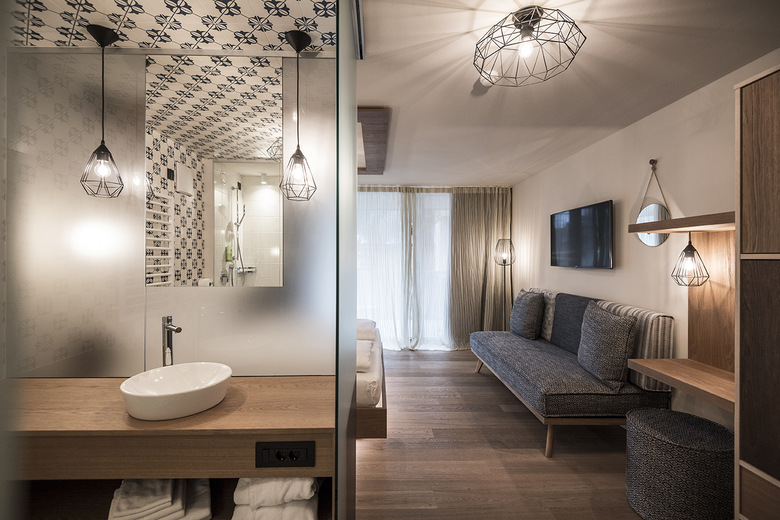 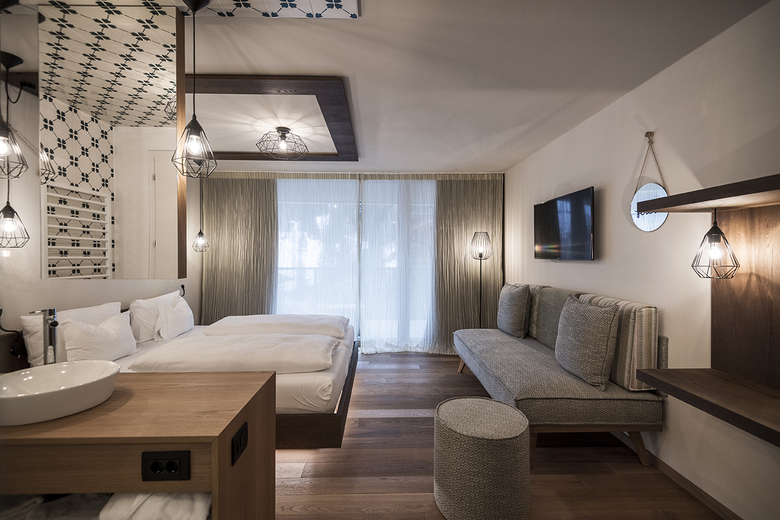 A house brings the nature inside | In the demolition and reconstruction of the Hotel Tofana in St. Kassian / S. Cassiano in Badia Valley (IT), the surrounding mountain range served as inspiration for the new architecture and interior design. The concept of the new "Explorer's Home" transfers the athletic spirit of the owner family to the entire building...

The traditional family establishment was founded in 1933 and is now run by the third generation since 2011. Günther and Verena Frena’s enthusiasm for sport played a decisive role in the design of the new hotel. The dynamic personality of the two Yoga and Pilates instructors, mountain bikers, ski and snowboard instructors and mountaineers has led the new Tofana to adapt to these two athletic powerhouses: the "mountain" becomes an abstract conceptual inspiration for the entire architecture. The outer silhouette is aesthetically pleasing with its unique scenic entourage and reflects the shape of a tree-lined mountain peak. The hotel acts de facto as a "base camp" for the guest.

"From building to landscape: the design celebrates the evolutionary transformation of an originally compact building - into a layered structural landscape that sustainably reflects its surroundings... the house brings nature into the house." (Arch. Lukas Rungger)

Interior and exterior, retreat and natural experience, are connected by terraces and balconies, which seem to encircle the landscape. Spacious window surfaces and the terraced structure allow light to penetrate deep into the interior of the building. The terraces are merged by vertical elements in the form of stairs and ramps and are drawn up like a path winding up and around the building to the roof with a “summit cross”.

The green case
Densely planted coniferous trees and plants that wind upwards characterize the appearance of the facade. The building becomes an integral part of the surrounding natural backdrops, whereby the compact building with its irregular, asymmetrically designed shape and the many edges acts like an upwards tapering rock formation. The house brings nature into the house.

At the same time, the numerous trees on the terraces intensify the conceptual design ideas, and seem to allow the outer space to merge with the interior.

Never stop exploring
The new Tofana should become the temporary home of the guest... Meeting point, regeneration and recreational center as well as starting point or base camp for adventurers, sportsmen and connoisseurs.

Following the motto "Never stop exploring", the concept of movement and the infrastructure in the new Tofana Hotel, follow the principle of a climbing route, which can be traversed by the visitor. The nature and the mountain serve as a stage for various places to linger and relax.

Caves and Biotops
Various lounges and restaurants can be found on the ground floor, always following the alternating natural landscape of the Badia Valley: furniture and sofas in blue, green and brown tones suggest alpine meadows, biotopes, moss forests or rock caves. From the “Base Station” - the reception with gondola – takes you up to the “hut cabins” (rooms & suites), further over the rocks to the summit of snow and ice creating the relaxation area with a view of the Dolomites. The natural experience becomes the main theme of the entire design.

The furnishing is flexible, the details are thought through down to the smallest detail and made by local craftsmen. The harmonious materiality of the house is based on local sustainable elements such as larch wood, linen fabric, natural stone walls and large, light-flooded glazing… Hammocks, swings, poufs, couches, cushions, posters and words weave through the spaces, underlining the genuine character of the house.