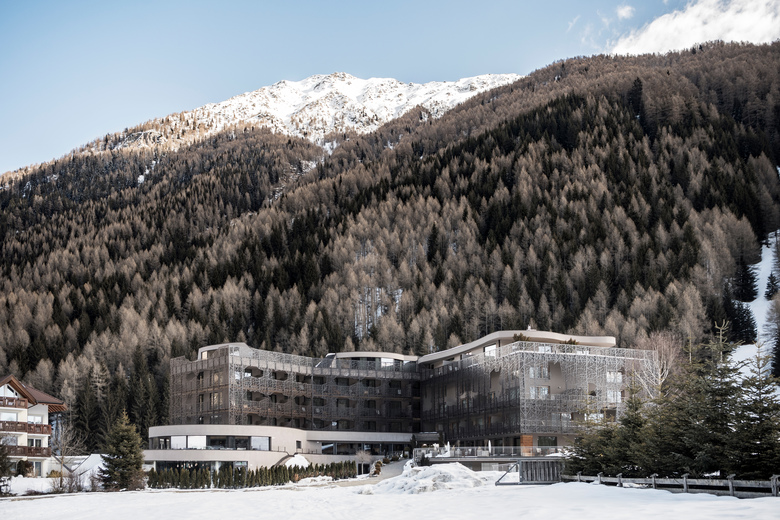 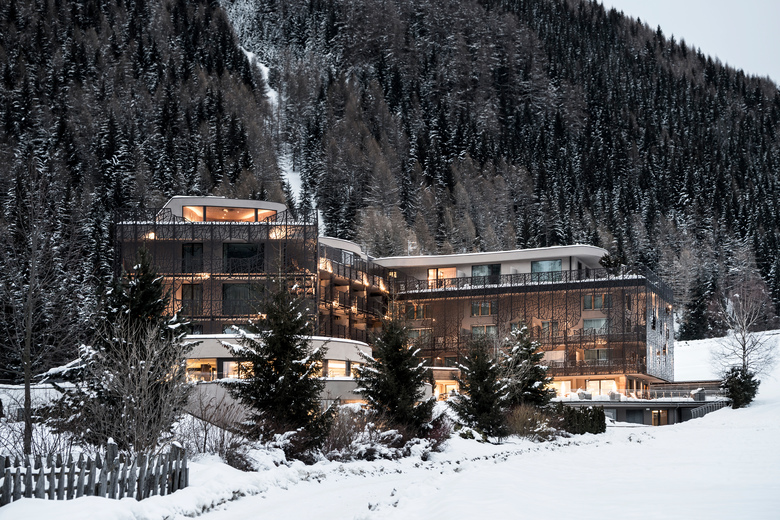 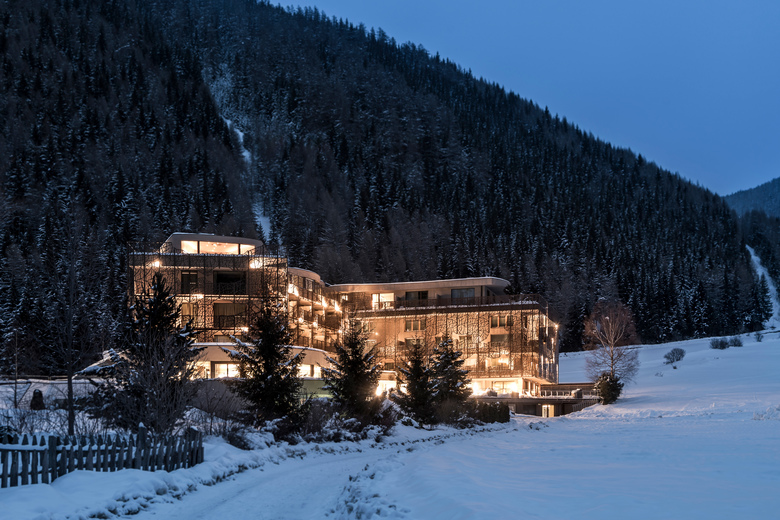 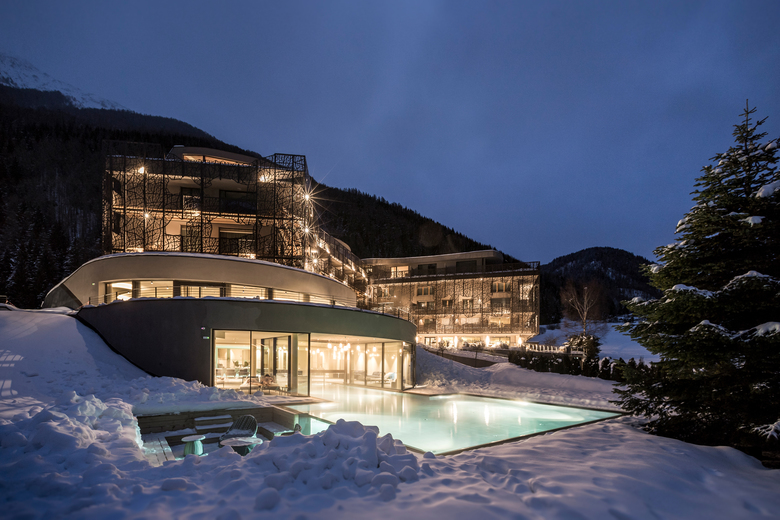 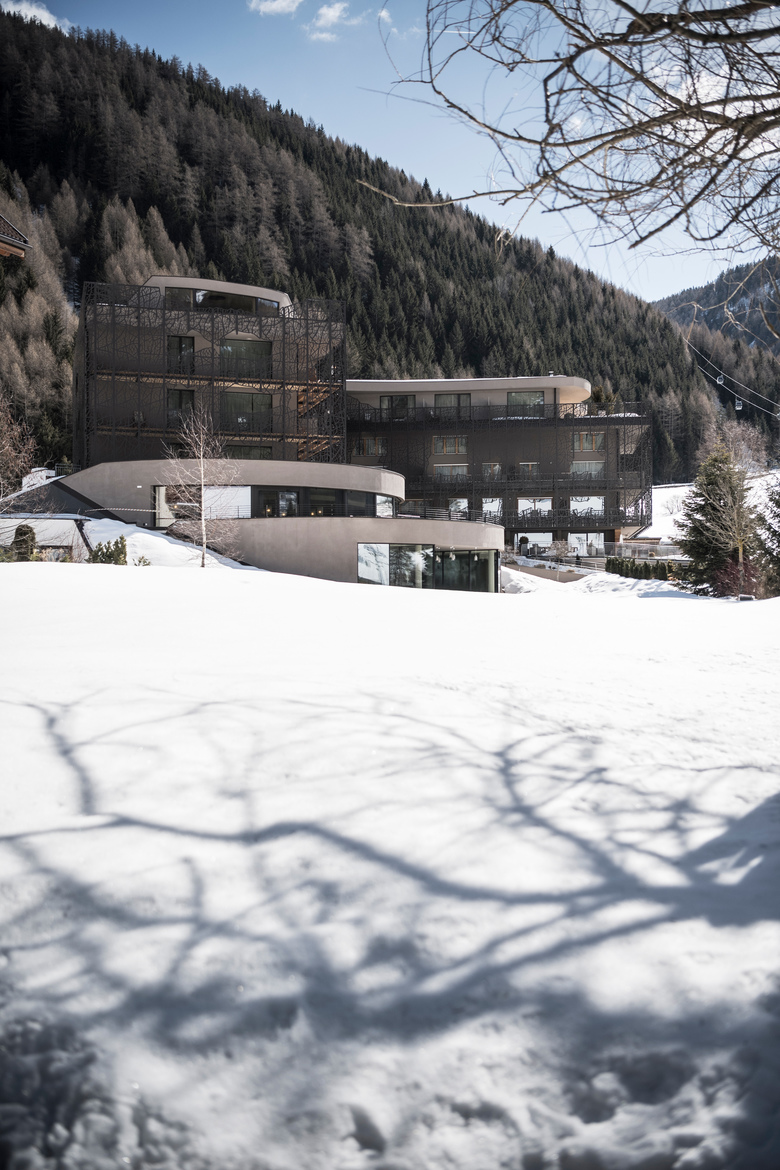 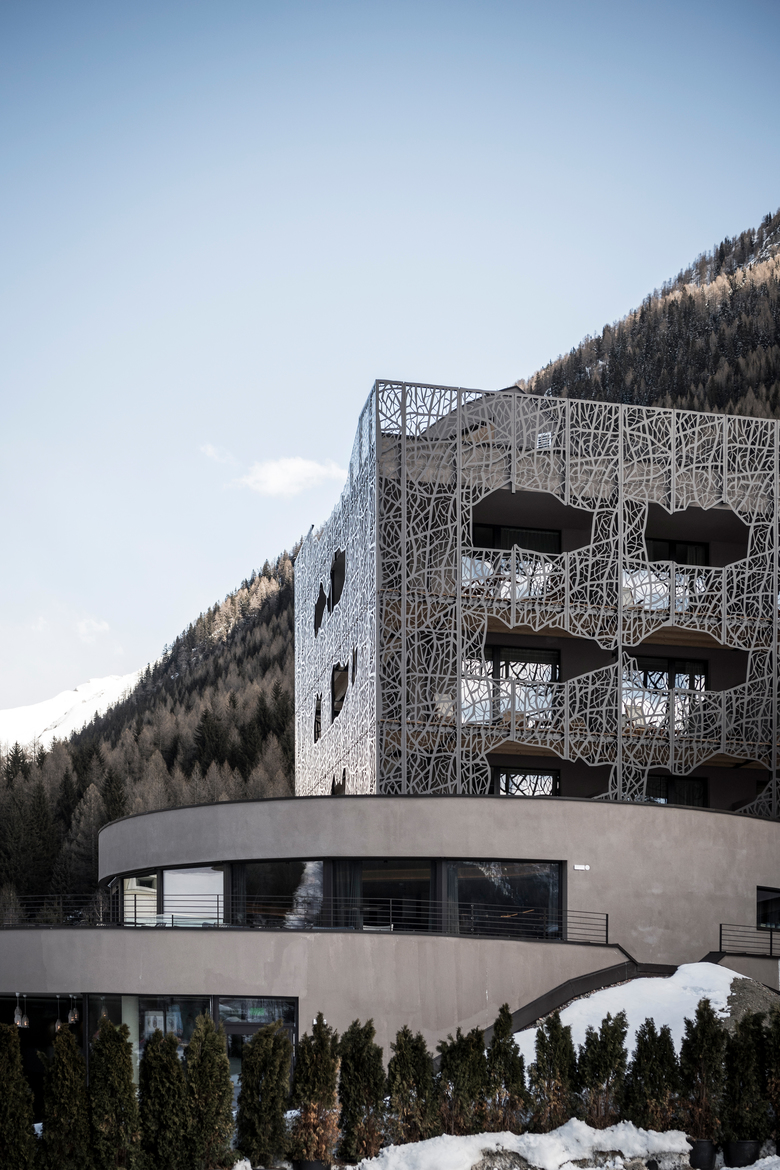 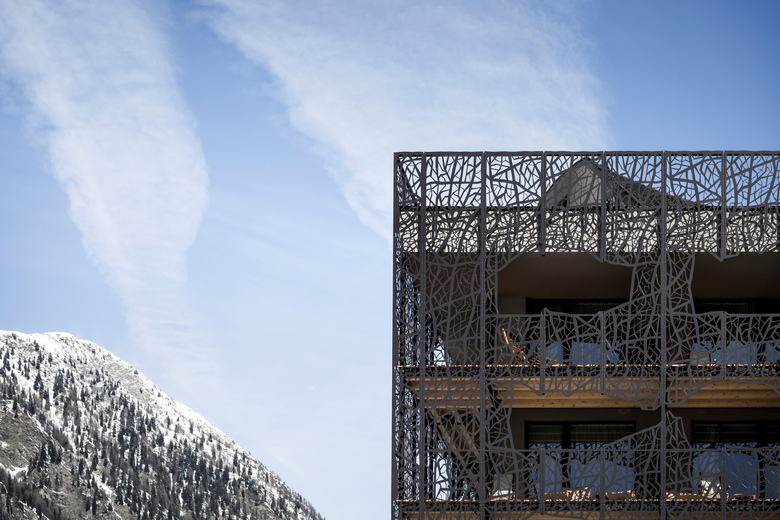 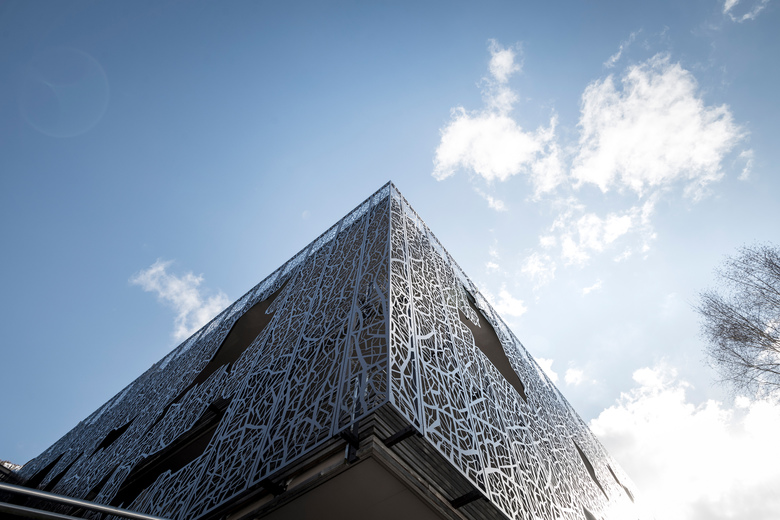 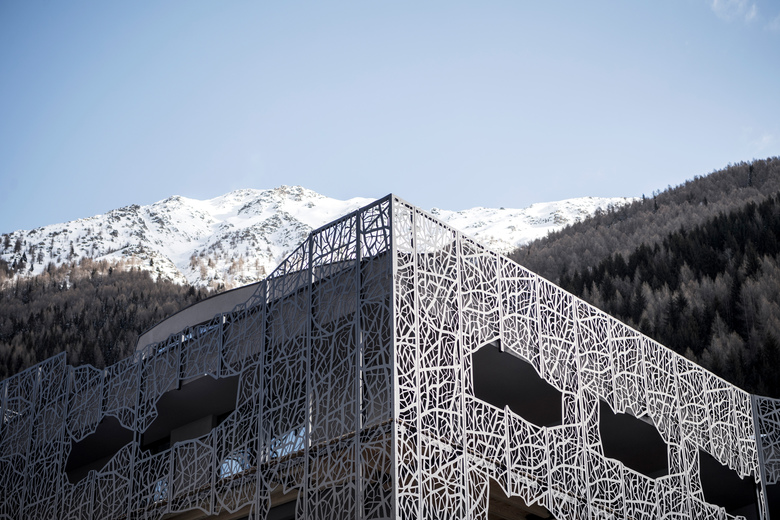 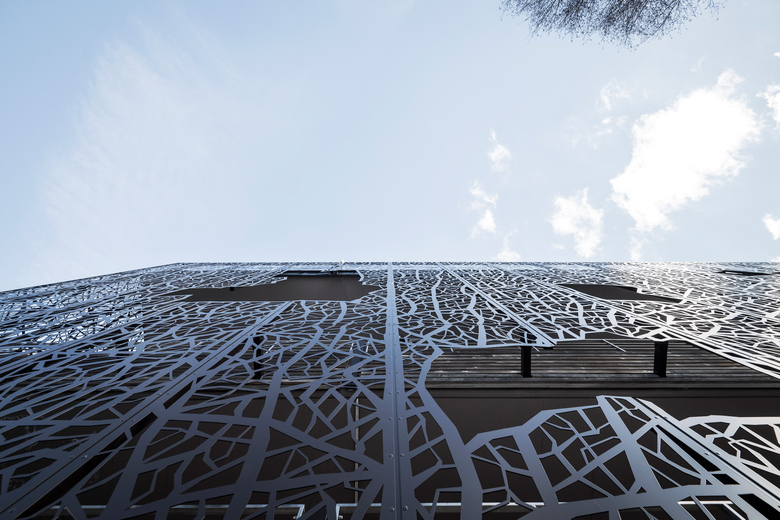 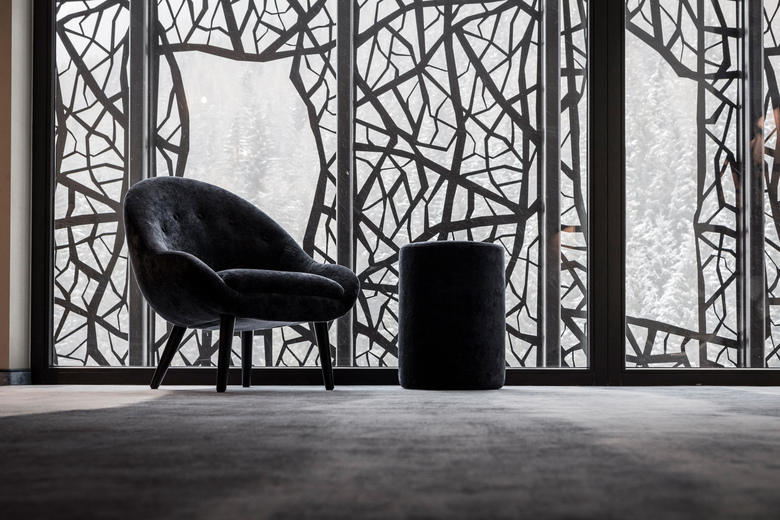 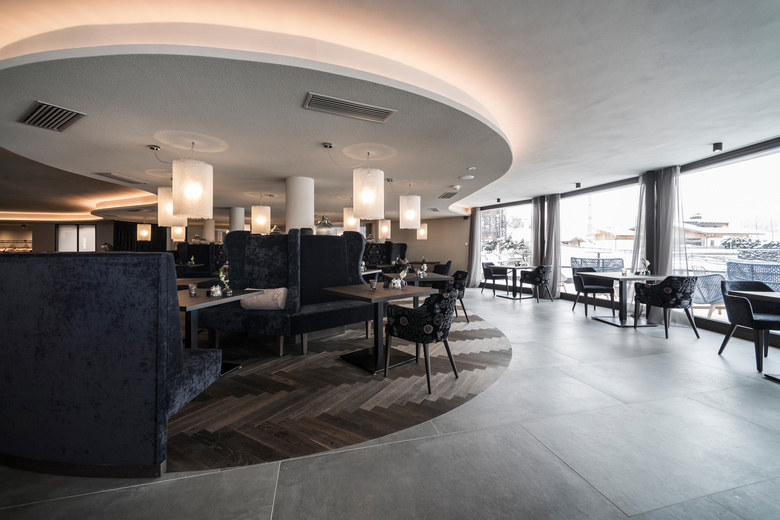 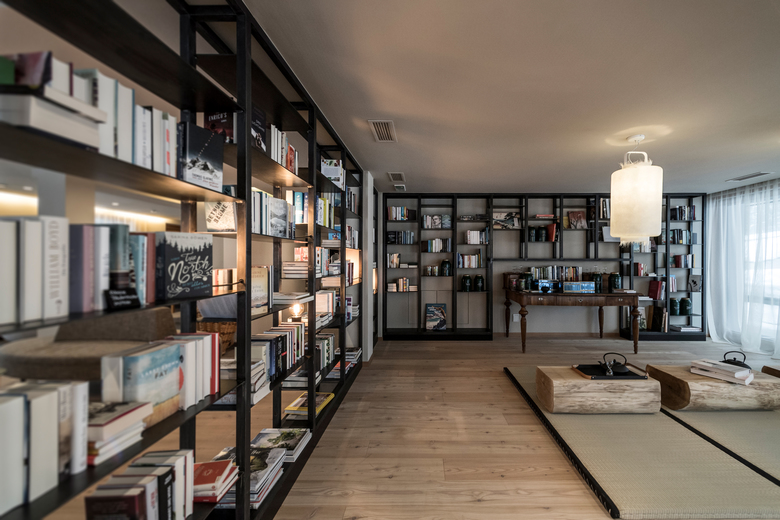 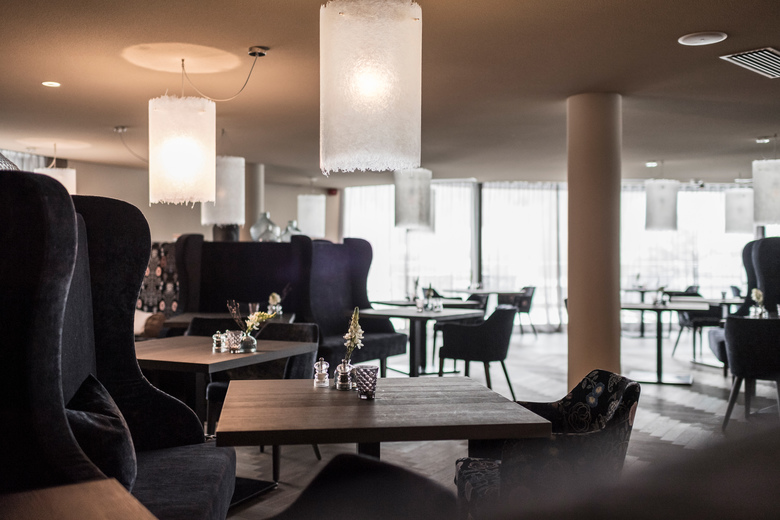 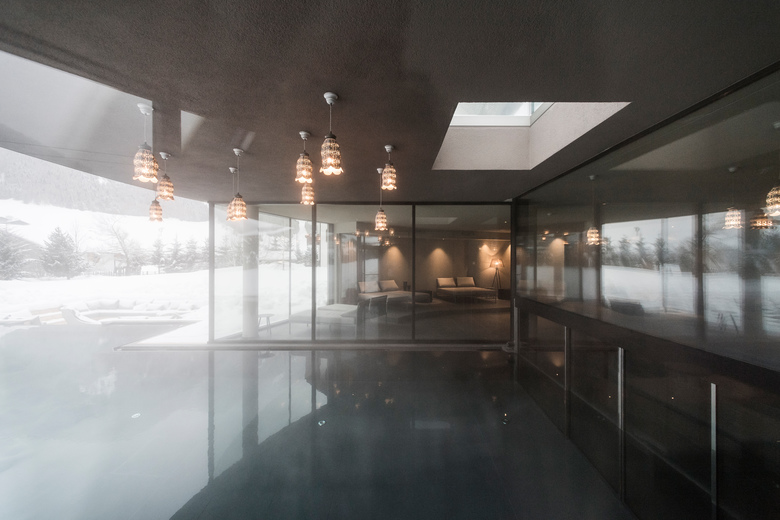 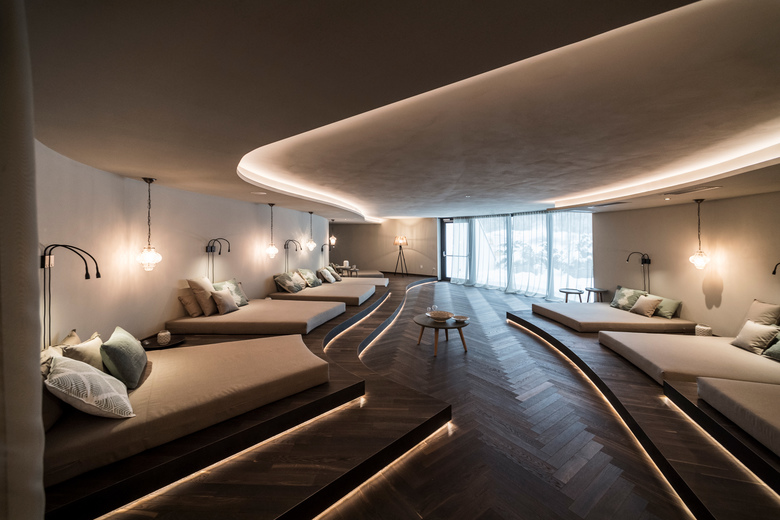 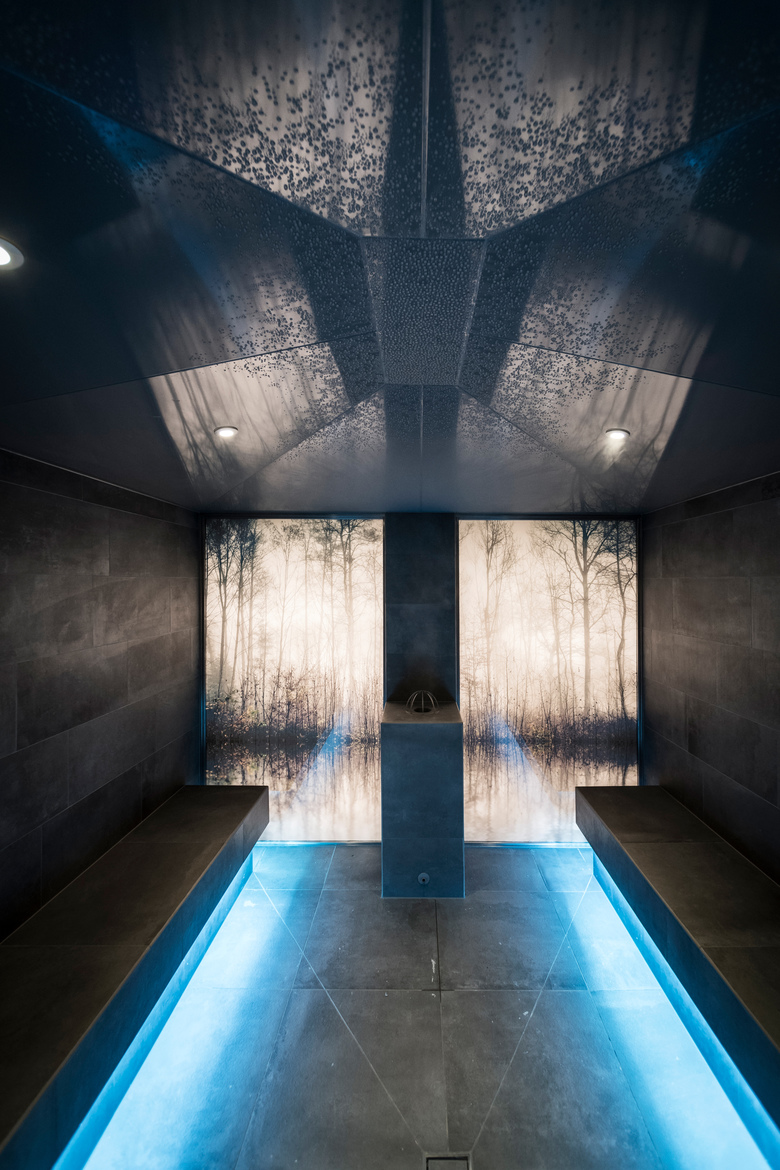 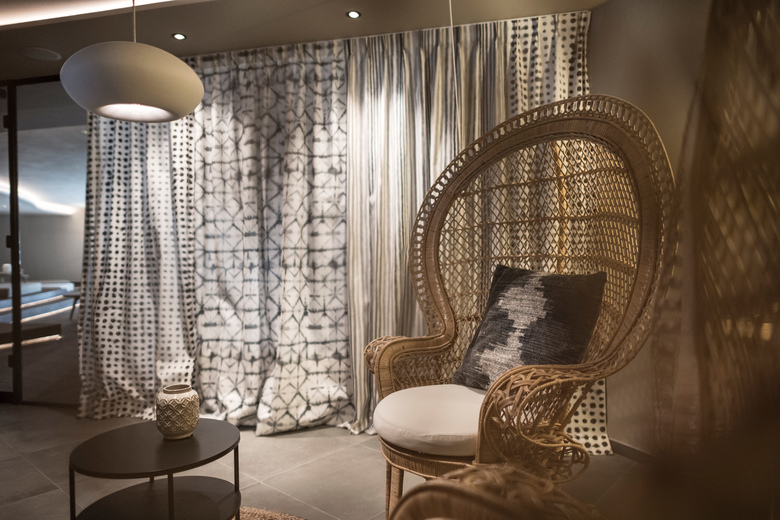 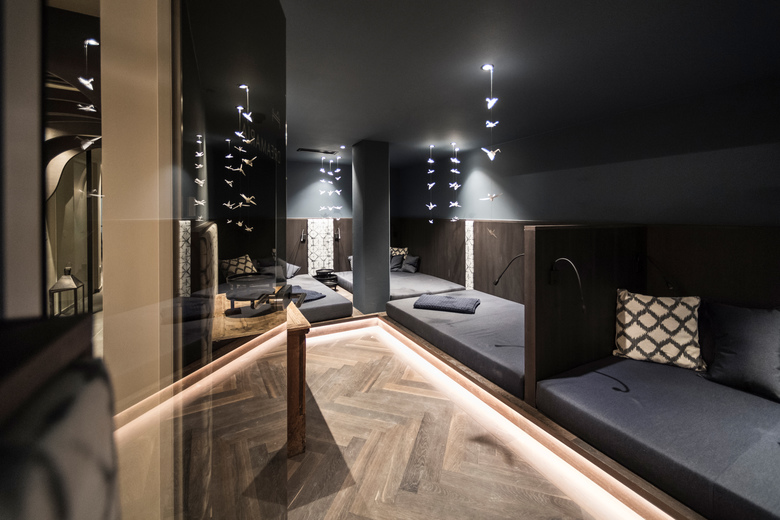 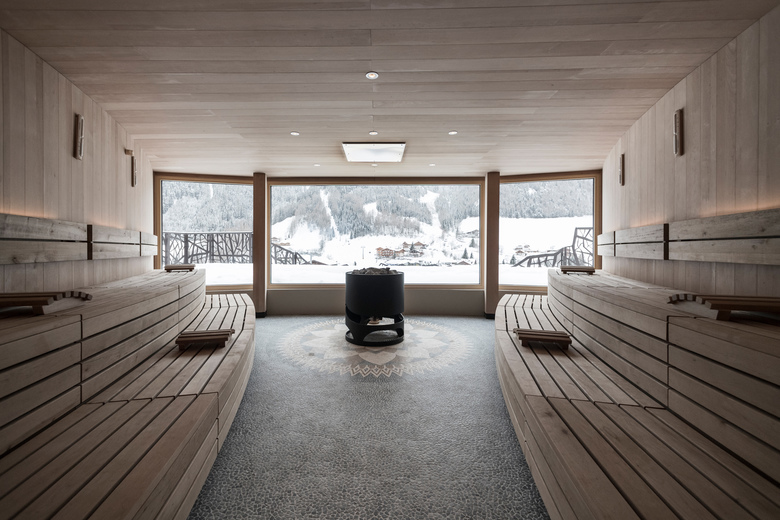 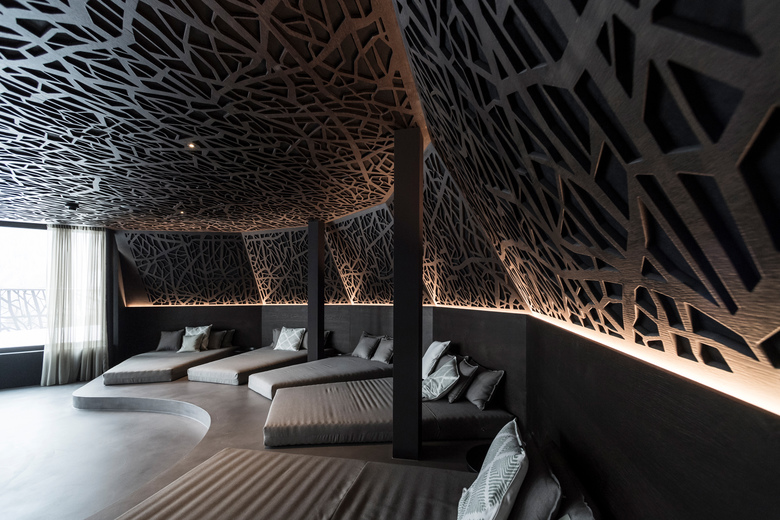 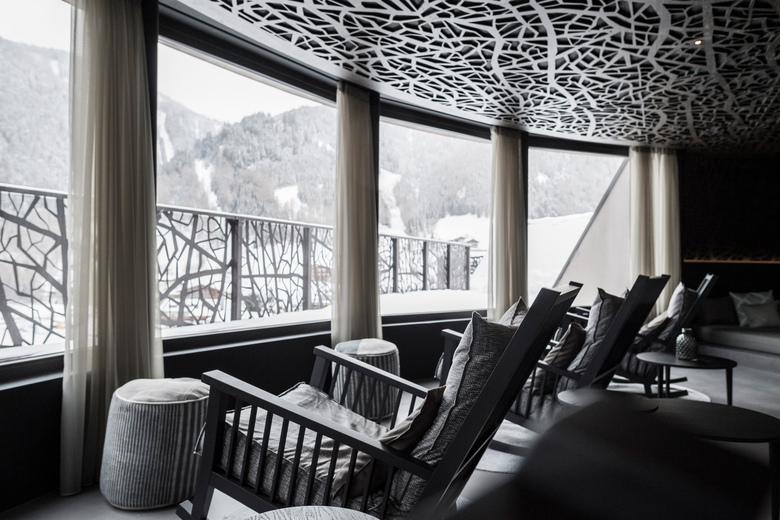 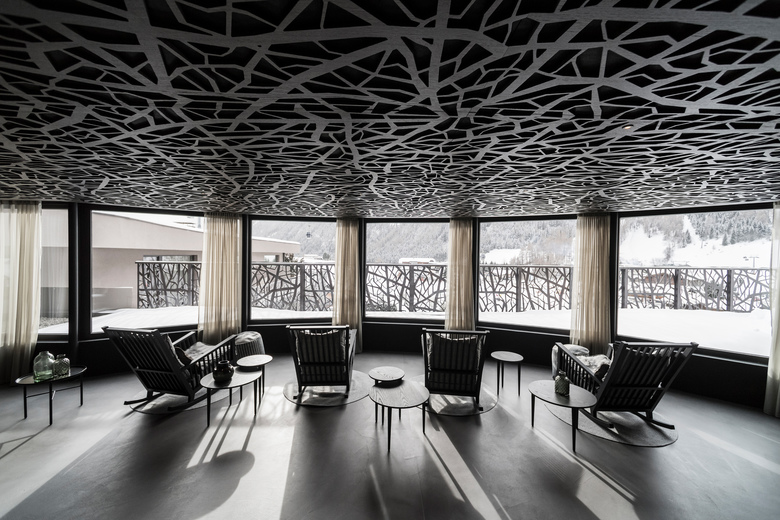 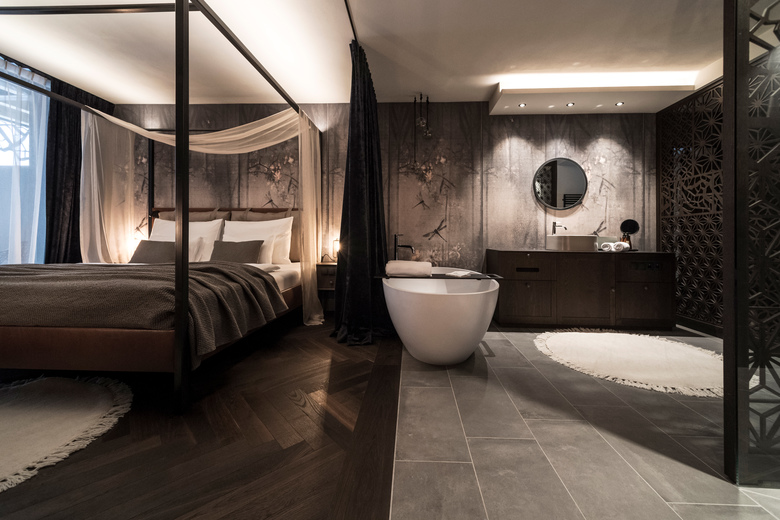 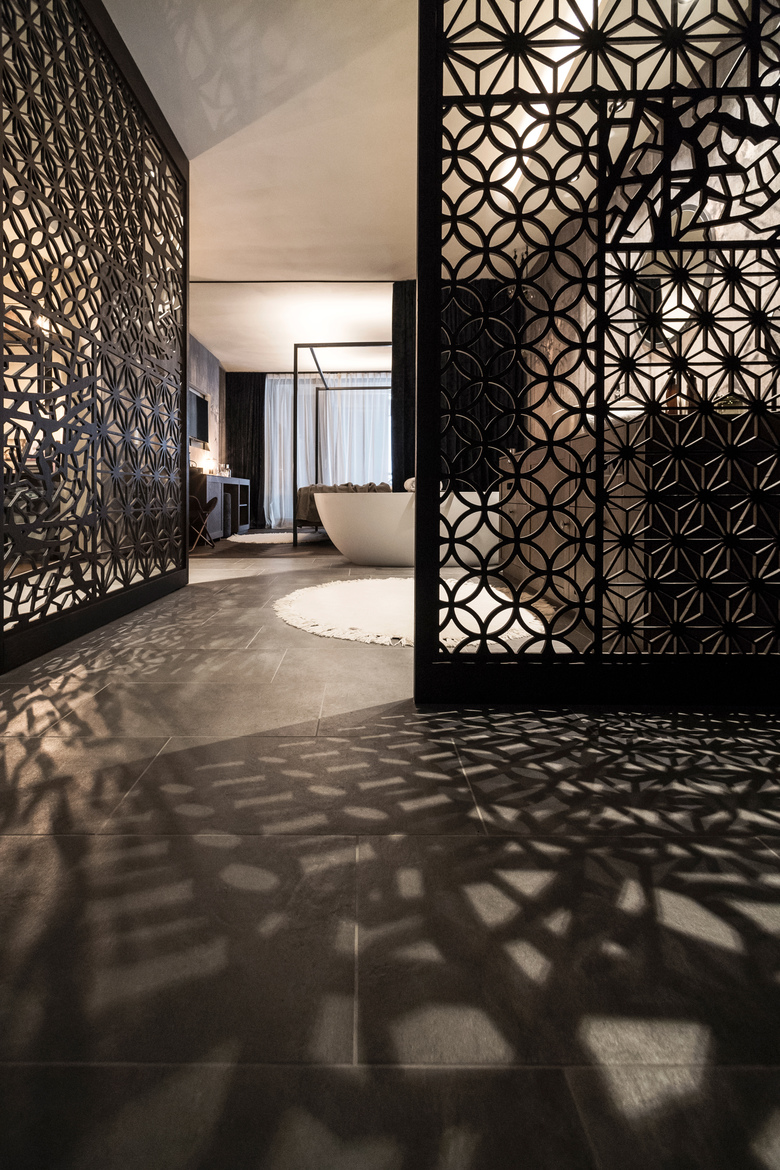 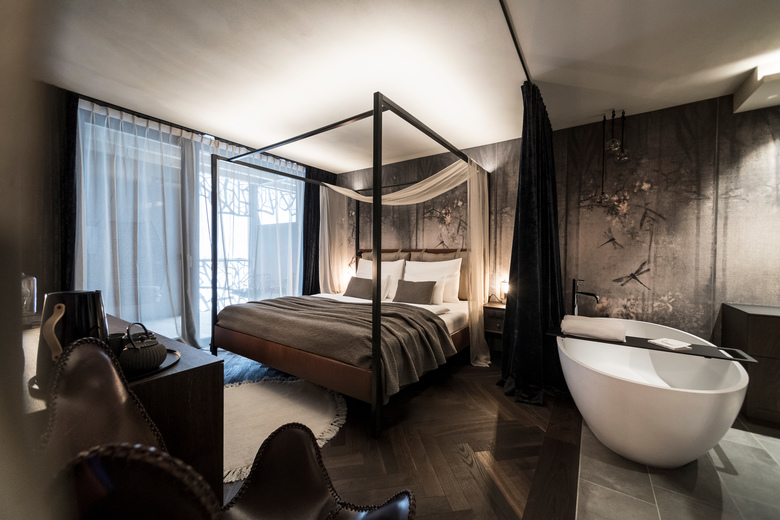 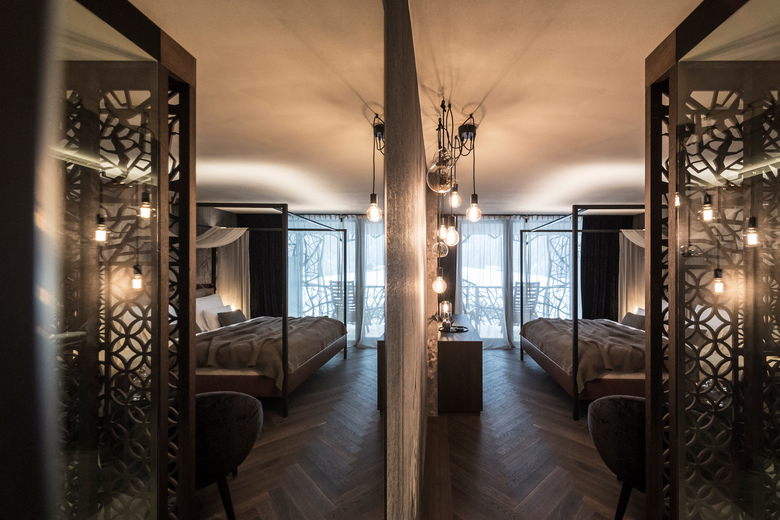 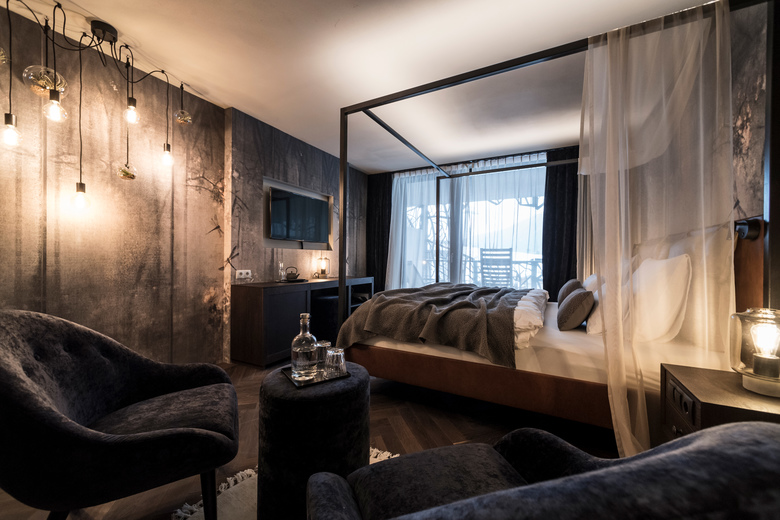 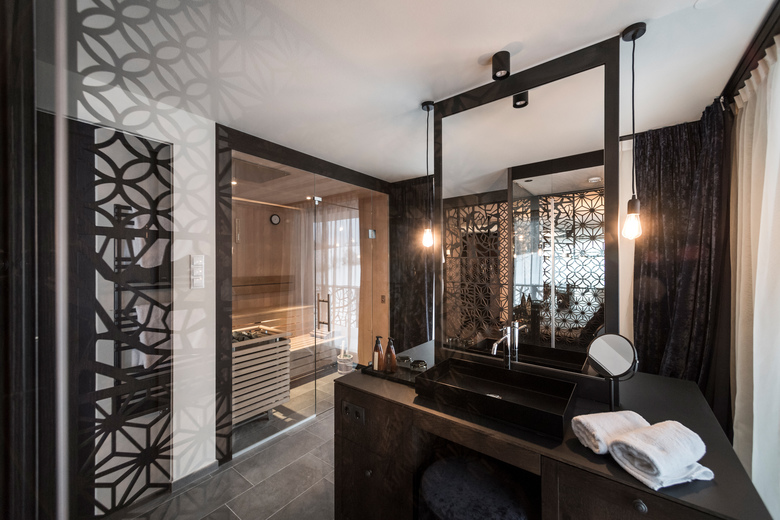 Auite with its own sauna and wellness oasis
Photo © Alex Filz 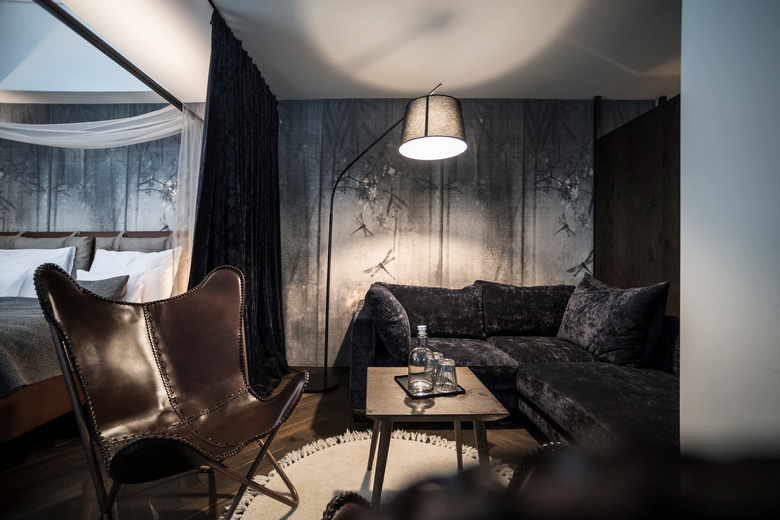 Magic in the moor | Moors have always been mystical places full of secrets and drifting moods. The specific characteristic of such a genius loci served as the central design inspiration for noa*’s project, which entailed the redesign and extension of the former "Moarhof" hotel at the end of the Valser valley, which is surrounded by moorland at about 1,300m altitude.

The result of this mystical transformation is the 4-star-S Hotel "Silena". With its’ swamp-coloured, organically angular and integration into the landscape, it appears to be growing out of the unstable ground as a place of tranquillity, strength and soul, designed down to the smallest detail. The surrounding archaic nature as well as the southeast-asian touch of the interior and the extensive accompanying program, which was specially requested by the client, were the decisive factors for the final outcome.

NATURALIST-ASIAN ARCHITECTURE
The oldest part of the original hotel occupied the south-west side of the spacious hotel area before the intervention of noa*. In the course of the redesign in 2017, it was demolished down to the supportive structures and suspended ceilings and then redesigned according to the naturalistic-asian concept. The structure of the south-east wing, which was added in 2011, has been preserved. An earth-coloured, aluminium panel facade represents the surrounding moor area and provides a visual connection of both the old and new structures. The surface of the buildings exterior resembles the plants of the swamp, which seem to grow up the hotel complex and envelop it in its entirety.

On the ground floor, the new wellness area appears to be connected to the landscape with its’ organically curved façade. Here you can find a new sauna and beauty area, two relaxation rooms as well as the existing indoor pool. To the south, there is a new open-air lounge and indoor-outdoor pool. The expanded and redesigned hotel restaurant, including the kitchen and sweeping outdoor terrace can be found one floor up above the wellness area. Furthermore, a new tea library was built in the southeast tract. The renovated 1st and 2nd floor houses newly designed and enlarged guest rooms with balconies, each having over 30 m². The third floor was completely rebuilt and has additional rooms and a suite with its own sauna and wellness oasis. In addition, another floor was built in a light wooden construction, which visually corresponds with its sweeping appearance of those of the ground floor. On the roof terrace there is a panoramic sauna, relaxation room, lounge and roof garden, richly planted with moss and grass. The roofscape of the new building merges seamlessly with the greenery of the surrounding mountain and moor landscape.

INTERIORS – IN BETWEEN DAY AND DREAM
Noa* consistently incorporates the hotels exterior appearance into its’ interior design concept. The moor, natural motifs and the southeast-asian region dominate the design for the 29 newly built rooms, reading rooms and suites, wellness zones, restaurant, lobby and lounge as well as for the library.

Similar to the overall expression, wallpapers with an overlaying touch of dreamy blue give the guest rooms a soft, weightless ambience. Canopy beds with white duvet covers and green-blue overthrows, underline the romantic touch. Showers and bathtubs within the living spaces, signal intimate familiarity. At the same time the wooden decorative panels surrounding the showers, take up the wallpaper motifs, such as bog or flowers of life, and combine the spatial world into a harmonious overall work of art. Blue curtains and upholstery quote the well-being of the blue hour; an atmosphere between day and dream is created.

In the extended restaurant, guests meet at mealtimes, clustered like islands around the pillars of the dining room. Blue velvet seats are deliberately interrupted by interspersed, floral chair covers. Powerful wine and cheese cabinets are clearly reminiscent of the culinary delights of the house.

The ambience of the sauna and wellness areas on the ground and top floor is one of natural sensuality. The wall and ceiling elements show landscape impressions from the moor as well as alienated fern representations. The library takes on a rather asian mood, where the visitors sit cross-legged on tatami mats, which enhances the reading experience. The meditative space in the lobby and lounge is not far from the reception, with high seats in a programmatic blue.