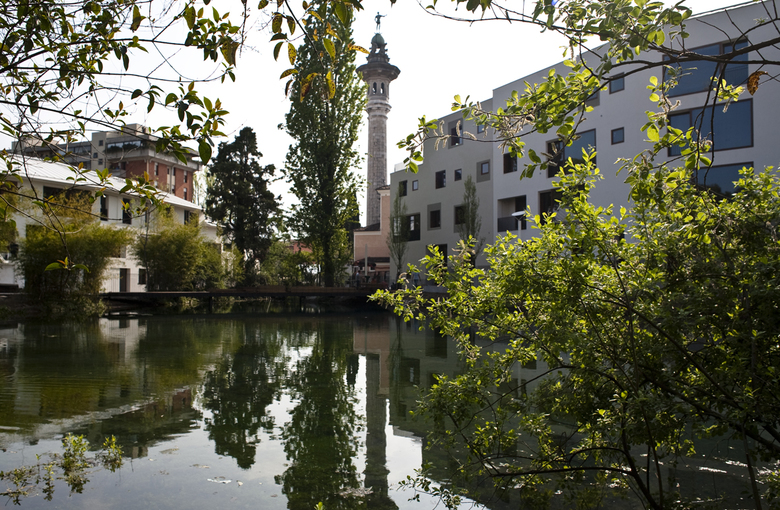 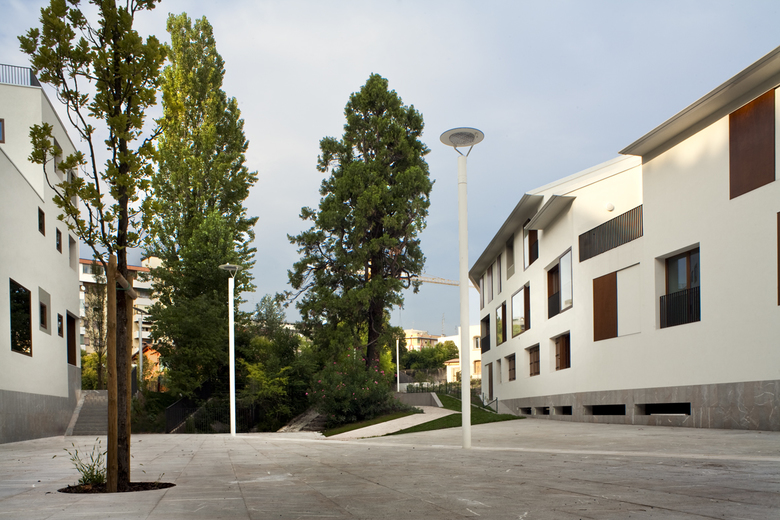 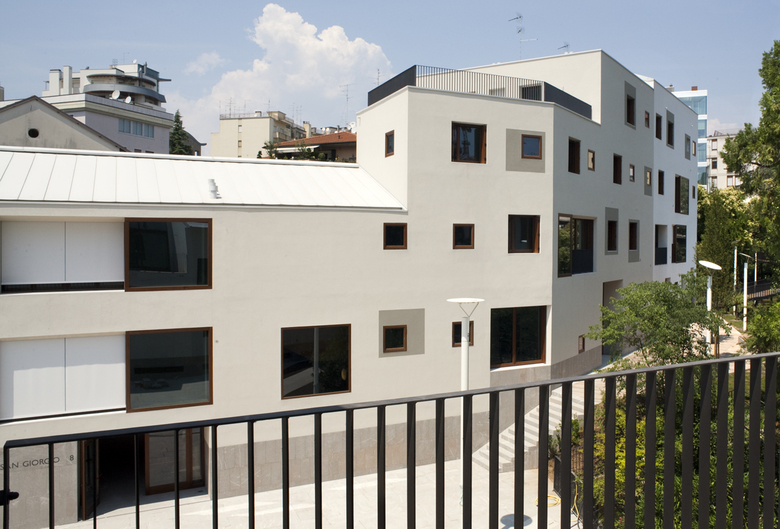 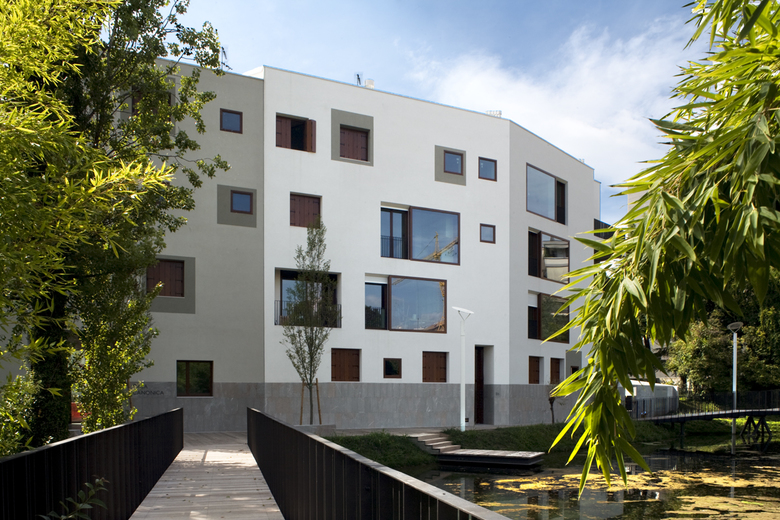 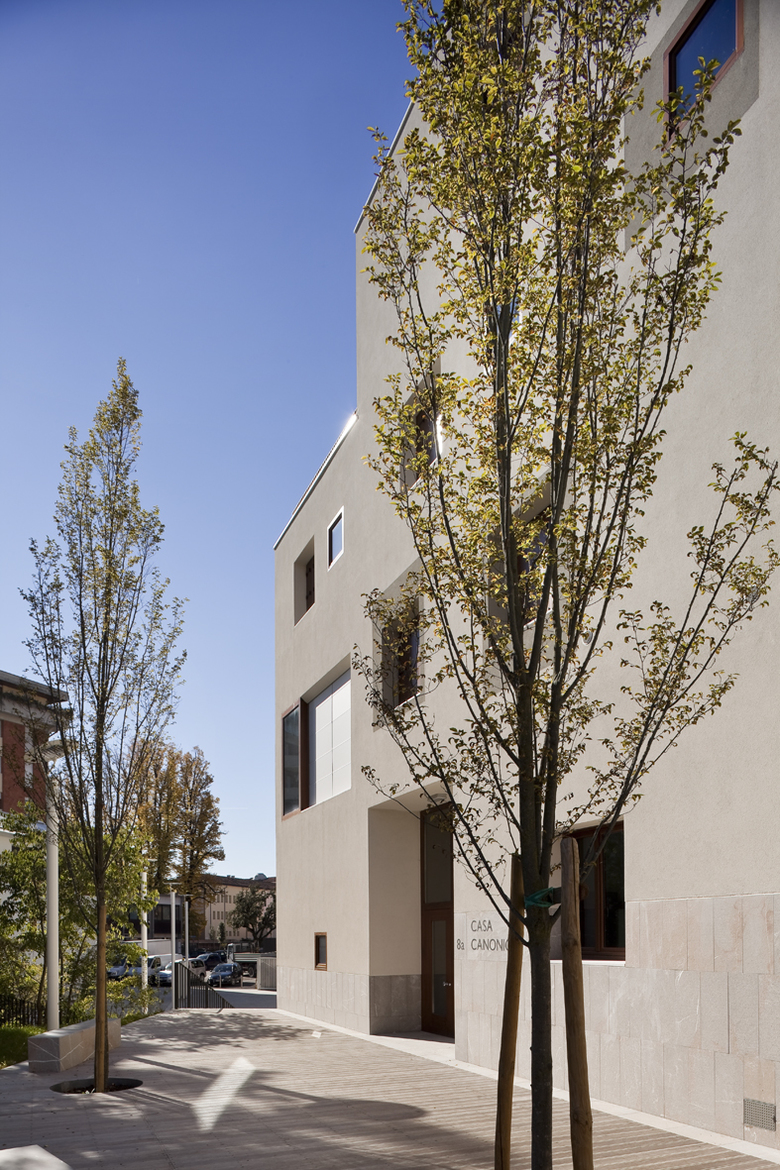 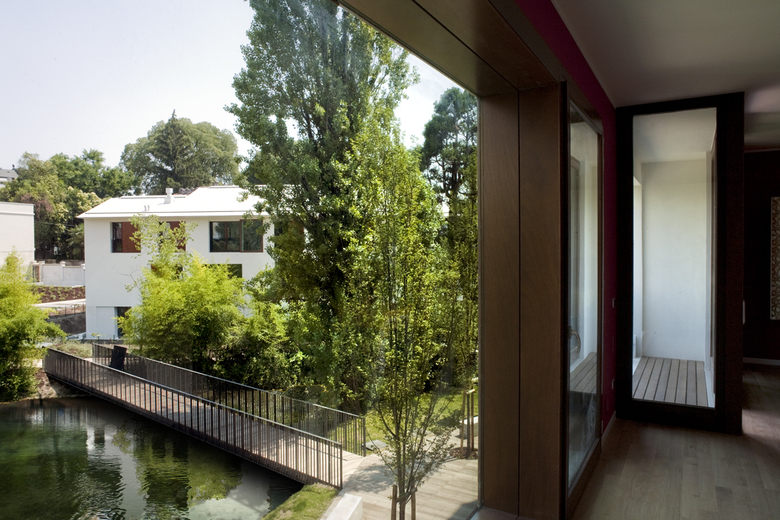 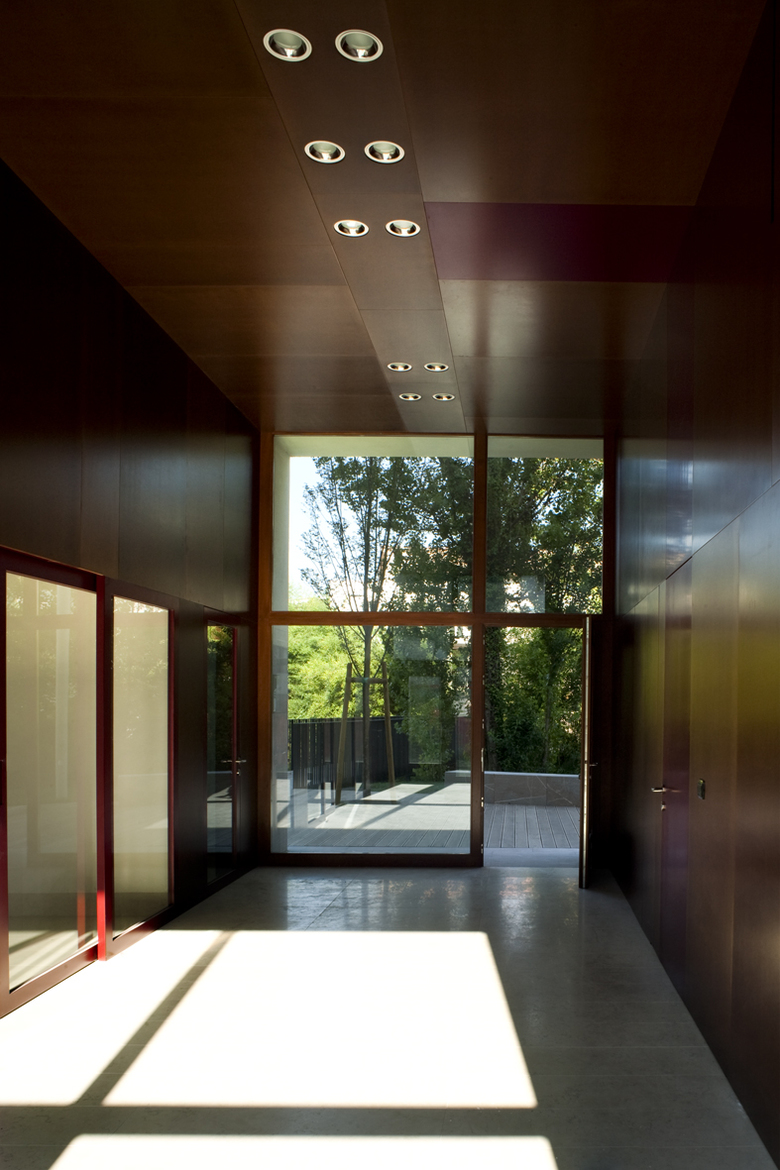 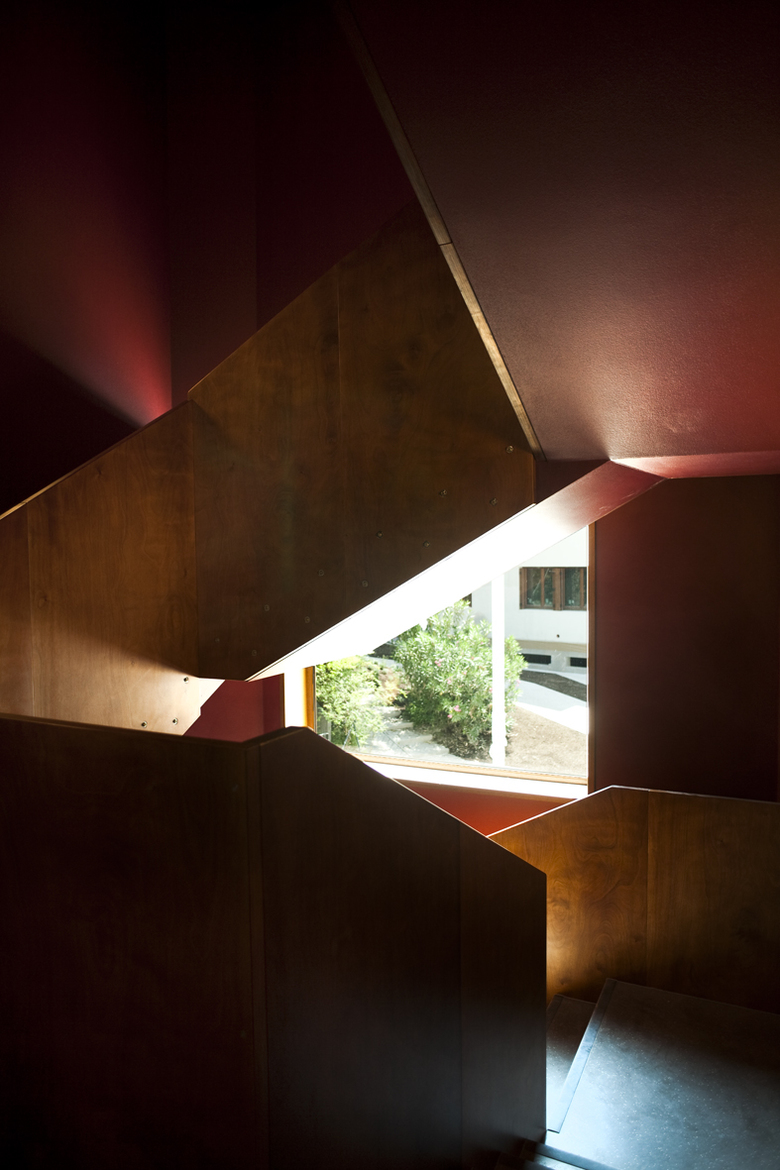 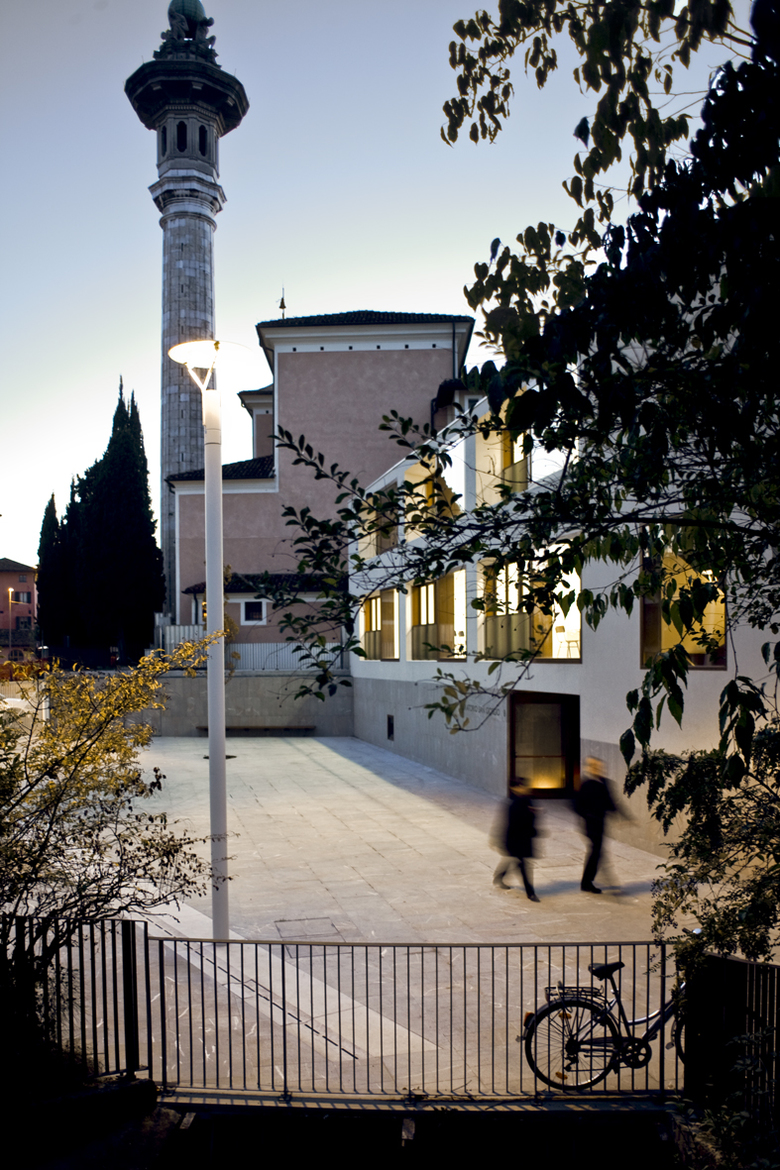 And having dreamed that he was a bird, a bee and a butterfly,

He was uncertain why he should try to feel anything else,

The urban refurfishment of Largo San Giorgio site in Pordenone, Italy follows the main topic of returning the citizens of Pondenone again a part of the town which was inaccessible due to the different levels of the streets and to the fact that it had been private for many years.

A path sews together the lake, the park and the square of San Giorgio church designing a public open space where the new housing and the church servces face.

As many of C+S works the architectural design focuses on the strong relationship between architecture and landscape.

The buildings mould themselves with the lake boundaries and their elevations are designed by big wood-made windows which both reflect the landscape and bring it inside the houses’ sitting-rooms.

The buildings design two sides of San Gorgio square which is open to the town during the day and closed for security reasons in the night thanks to a metal gate which folds on when not used.

The skirting board of the buildings is made of Prun stone, the same material which the square is made of.

The plaster surfaces of the buildings, light grey and light ochre coloured, is on the same flush of the stone and, as an effect of the buildings’ folds, one couldn’t easily tell whether the slight differences of the chromatic effetcts are those of a colour or simply of the shadow.

The buildings grow  with the levels of the paths surrounding the lake designing a new urban connection whcih specifically changes material: Prun stone on the square, larch wood on the bridges crossing the lake and ochre concrete on the paths of the park.

The path following the lake leaves the earth and jumps in the water with a metal structure suspended on sloping metal pillars.

The volumes  facing the square host the spaces of the church services.

Detailed architectural design defines also the other public parts of the buildings: entrance halls and public stairs, which are made of red-coloured wood, the auditorium (partially dag in the ground), with grey and red acoustic panels, the church classrooms which are graphically designed, All these spaces are naturally enlighted and look the marvellous landscape of the lake outside.

All the houses are opened to the lake with large wood-made windows and sliding wood panels to darken the spaces inside.

C+S design has always a very deep attention to sustainability. All materials used are ususally specific of the site where the project is found and all buildings are studied for low-carbon emissions.

In this case, the lake itself is not only the expression of the landscape of Pordenone, which is a very beautiful small hystorical town in the Northeast of Italy, built on the boundaries of the river  Noncello, but it becomes also the energetic structure to make the complex work. ULH is designed with a innovative heating and cooling system of pumps exchanging with the different temperature of the lake.

In this sense the lake itself becomes the main character of the architectural design as it is the background of the new urban scenography, the new liquid soil where to walk over and finally an energetic resource for the buildings’ functioning.