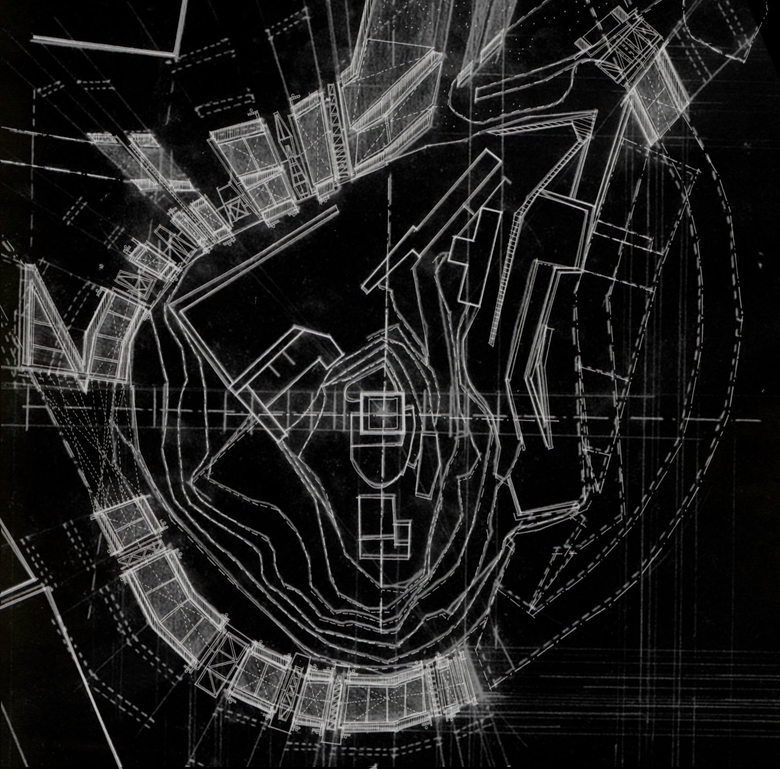 Genova SpA (Shipping port Authority) is characterized by an edge contour that manifests itself as an industrial front yard. This area of study (an enormous Ligurian coastline) is conditioned between two powerful natural boundaries (land and water). As an interstitial zone of historical maritime commerce, the man-made extensions (bacinas, berthing platforms, docks, jetties, piers, quays, walls, etc.) demonstrate an unspoken force about commodity, community, and culture. These physical constructions are localized manipulations of terrain that provide a platform for trade. Since the Unification of Italy, the port and city’s overall configuration has had immense transition. The formulation of the Iron Triangle (Genova, Milano, and Turino) and newly formed 1903 Consortium (C.A.P.) set in motion the port’s unlimited potential for a new loading/unloading capacity of goods. After deciding directional expansion toward the West, major immigration populated the growing labor force and assisted the arrival and departure of bundled cargo. Parallel to increase in ship activity, hydraulic mechanical cranes were employed to further accelerate the transshipment procedure with a higher load capacity.

The robotic reliance on operating cranes has enabled the port to adhere and maintain a greater measure of efficiency than with that of human effort. The port cranes present themselves as instrumental devices that allowed an unprecedented industrial growth for both the city and port. The crane’s relationship for expediting cargo is indispensable and can be viewed as indicator for marking economic and land expansion. The cranes are sophisticated mechanical extensions of specialized conveyance networks. Ideally, working cranes must never be fixed in one singular position, they must have mobile flexibility and conformed loading assignments. This assertion also implies a larger understanding for describing the city’s programmatic infrastructure development.

The ancient harbor’s basin has a limited capacity for the new type of shipping vessel. This territory of older constructions demonstrates the obsolescing of specific buildings, goods, and machinery. They are now seen as remnants of an aggressive industry that constantly upgrades moving procedures for financial profit. The historical Cotton Magazine, which once held 43,000 square meters of storage space with an 85,000-bale capacity, now houses a retail center. Within the recent past, the Old Pier (Molo Vecchio) used at maximum production capacity had twelve electric 1.5 metric tonn. cranes running simultaneously. While the original building structure is currently modified, there is five cosmetically repaired unused cranes, which are still positioned on railroad ties and are left virtually isolated and disconnected operationally. These specific cotton cranes can share the same outdoor dining space with local yacht members. Nearby, on a 6 foot rusticated stone base, one 1888 spray-painted primer grey features a bronze plaque dedicating the 1992 / five hundred year Christopher Colombus discovery celebration.

In order to evaluate the port’s modern experience of progressive industrialization, recognition needs to given the standardization of TEUS (see photo 4). These are twenty and forty foot long metal container boxes that can be used in conjunction with rail and truck. This formalized shipping unit is now distributed along many shared docks. This type of containerized dry good can be seen on the Calata Sanita Pier (directly opposite of the Old Pier near the La Laterna). This one inner port locale utilizes five overhead 40 tonne cranes to service different handling contracts simultaneously. When berthing traffic, cranes are working in a quasi-team fashion The distribution of cranes represents the port’s exchange capacity.

The studio mapping exercise is indicative for grounding research with simultaneously encoding chronological factual graphic and statistical chart-junk information. The format of the drawing is similar to a bandwidth graph. The underlying theme for investigation is viewing a spectrum of maritime activity in a perfect empirical format. The quantitative coordination of ship activity, crane type, land expansion, immigration, place, chronological time, loaded and unloaded tonnage frames the technological status of the port’s persistent desire to manifest itself as a dominating place of sea commerce. The drawing realizes that port priorities are contingent on external conditions. The drawing serves as a tool for expounding and extrapolating critical observations. For Example, ship sizes are currently at an unforecasted 500,000 tonn. dead weight total. One hundred years ago, this was not only unconceivable but also un-buildable.

The outlined proposal calls for specific participation with past, present and projected development of cranes and of Genova. The SpA is distanced on 17-kilometer coastline that geographically dominates the city’s water edge condition. This longitudinal dimension affords even greater expansion for more industrialized growth. Everyone whom acknowledges this immediate locale of urban cohabitation can place a panoramic glimpse of the modern cacophonic (orderless, perhaps profane) commercial expansion. The SpA ‘s potential threshold for cargo handling could perhaps never be fully realized when true building boundaries are never defined. The massive overall proportional dimensions of the new Voltri docks have created a de-humanized shipping district. The port is constantly under observation in attempt to further expand its capacity to heighten the density of traffic.

This multi-functioning international managerial trade center currently uses the area underneath the loop road around La Lanterna as a temporary storing place for outmoded pieces of rusted machinery. This specific area can be seen as a transitional emporium of yesterday’s tools and also the greatest historical Genovese landmark. The sophisticated characteristic and manufactured mechanical intelligence within a brief evolution of cranes marks a systematic trajectory about inscribing service and dedication. The cranes have served as set of home-based tools for enabling political seatrade abroad.

The outlined proposal calls for specific participation with past, present and projected development of cranes and of Genova. The studio proposal is a physical final resting terminal (graveyard) set into the existing perimeter profile of the loop road underneath La Laterna. The studio proposal works by informing a partially demolished utilitarian overhead passageway with a proposed suspended pedestrian park design by Rem Koolhaus. His future design physically links this historical monument with the new Ferry Terminal.

The new ground level offering revises the usage of this privatised property in attempt to engage a somewhat unusual public cemetery setting. In 1890 this was hinge point site for deciding what direction to expand. The 1997 master-planned area of San Begnino has two differentiated ground levels of 18.3 meters.

The lower proposed pathway will be visually submerged against the built-up datum of the newer industrial service plateau. The design works a large vista on the eastern side of the lighthouse facing toward the inner harbour. The existing vertical ramp and stair circulation is more emphasised. The entrance and exit bookend and anchor this upward path. The new terminal is meant for re-connecting two open ends (past and future) with the burial of crane booms. This insertion would re-structure the existing grade surface to allow a larger collection for future crane booms. The largest spatial requirement is inthe cross section of the truss armature. Some floating cranes are to have a 350 tonn. maximum capacity. The boom’s segmental nature would foster a reading arduous strain and berthing ability. The specific maritime cranes gathered together could be examined to educate people about the port’s strategic outlook (one that has always embraced technical knowledge with corporate innovation)

The installation articulates a movable set of apparatus’ that allow a re-sequencing, like that of the port profile (see drawing 4). The wrought iron cast metal and extruded A36 steel armatures would be minimally securely fastened below ground at a negative 1-meter sub-grade dimension. Using bracketed devices on an overhead retractable framework would fasten booms to the lowered visible height. In a metonymic manner, the crane booms are now fixed in a permanent conserved position (an Italian Catholic tradition). The older Cranes of yesterday and tomorrow’s outdated cranes would be openly displayed to re-represent and suggest an ideological machine age thinking (a positive attitude toward hard labor and commitment).