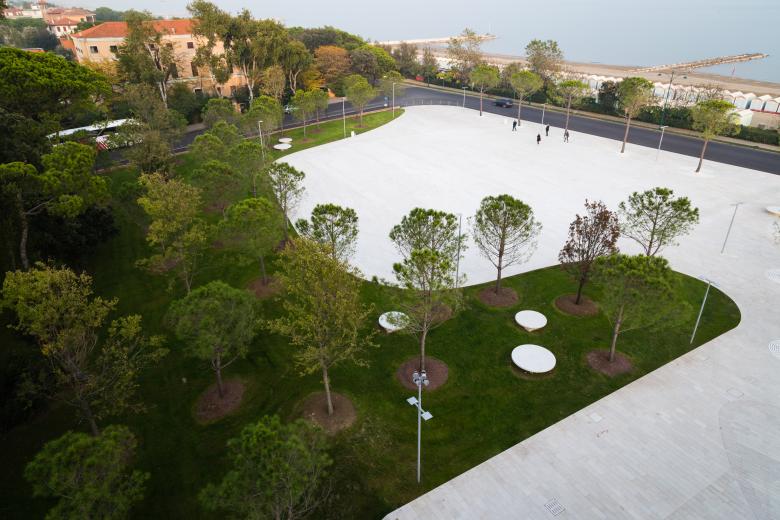 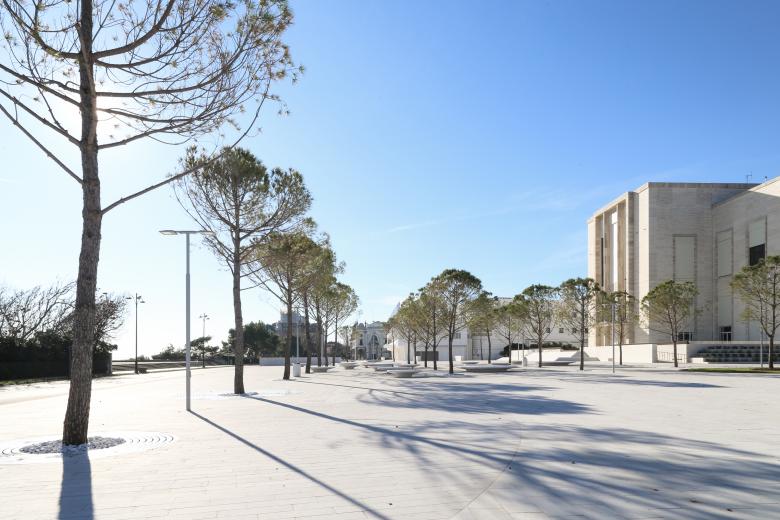 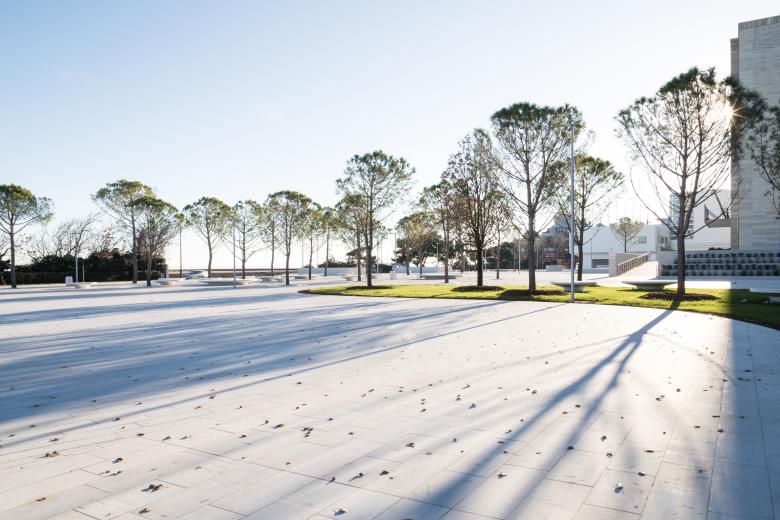 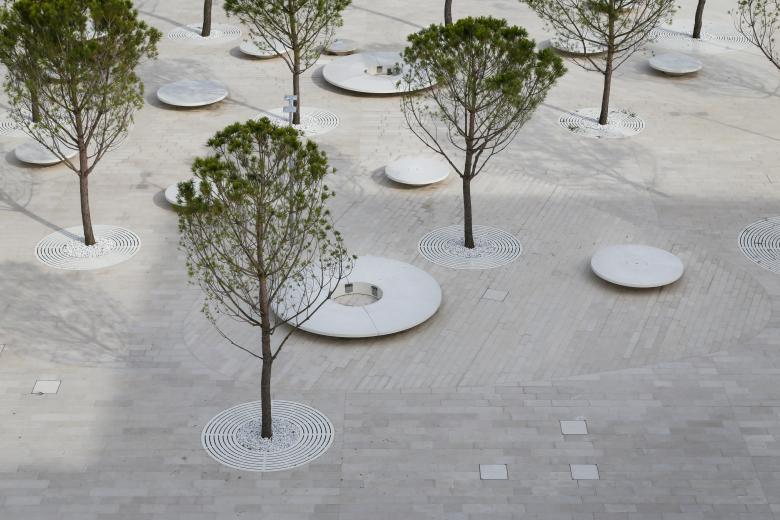 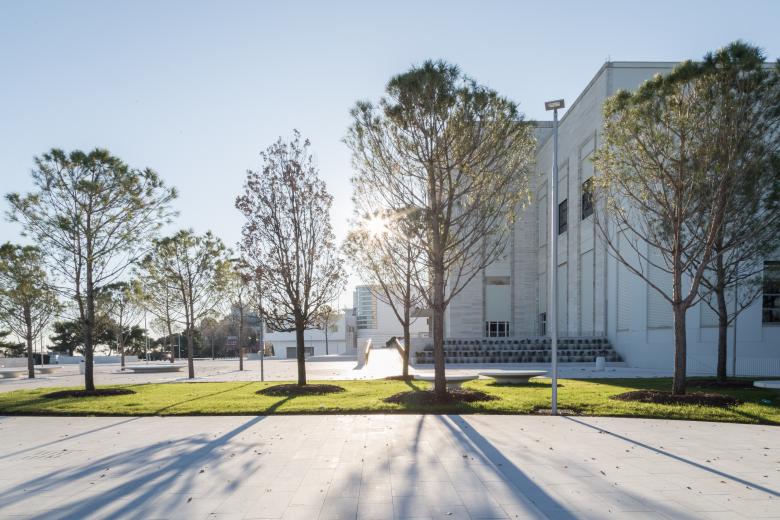 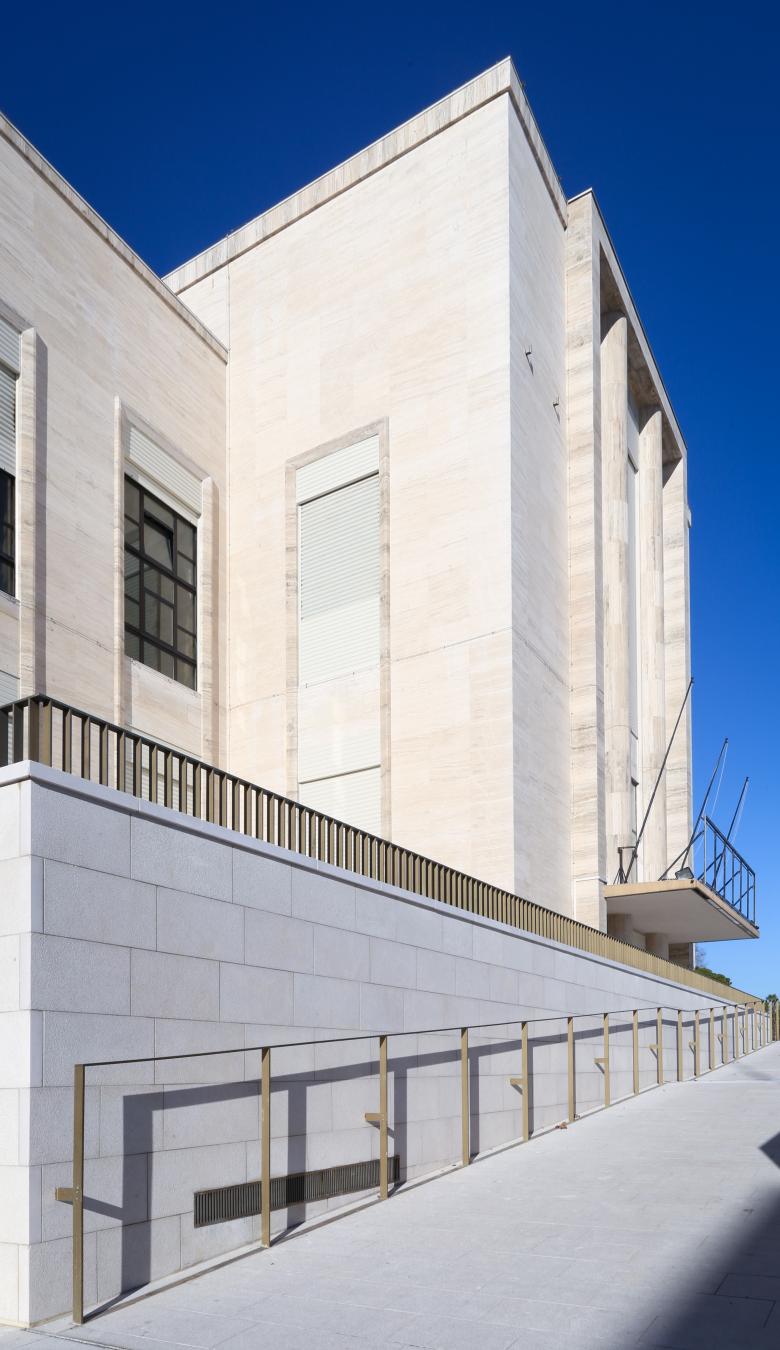 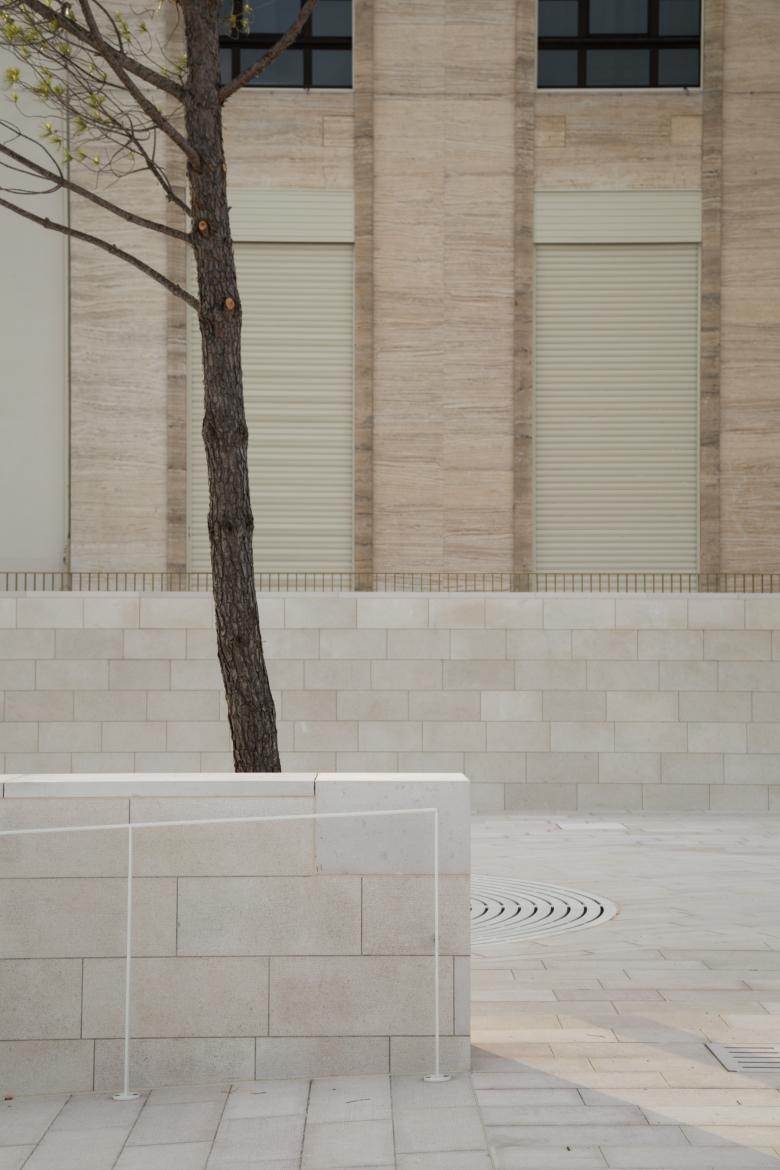 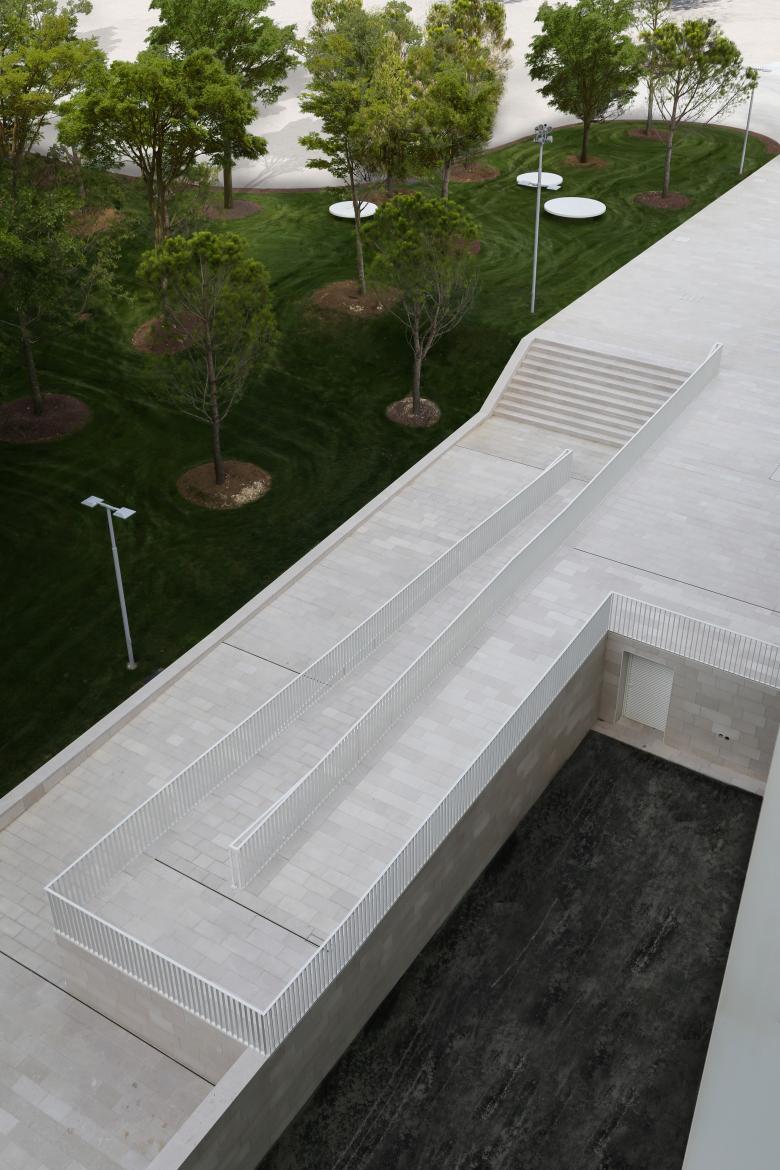 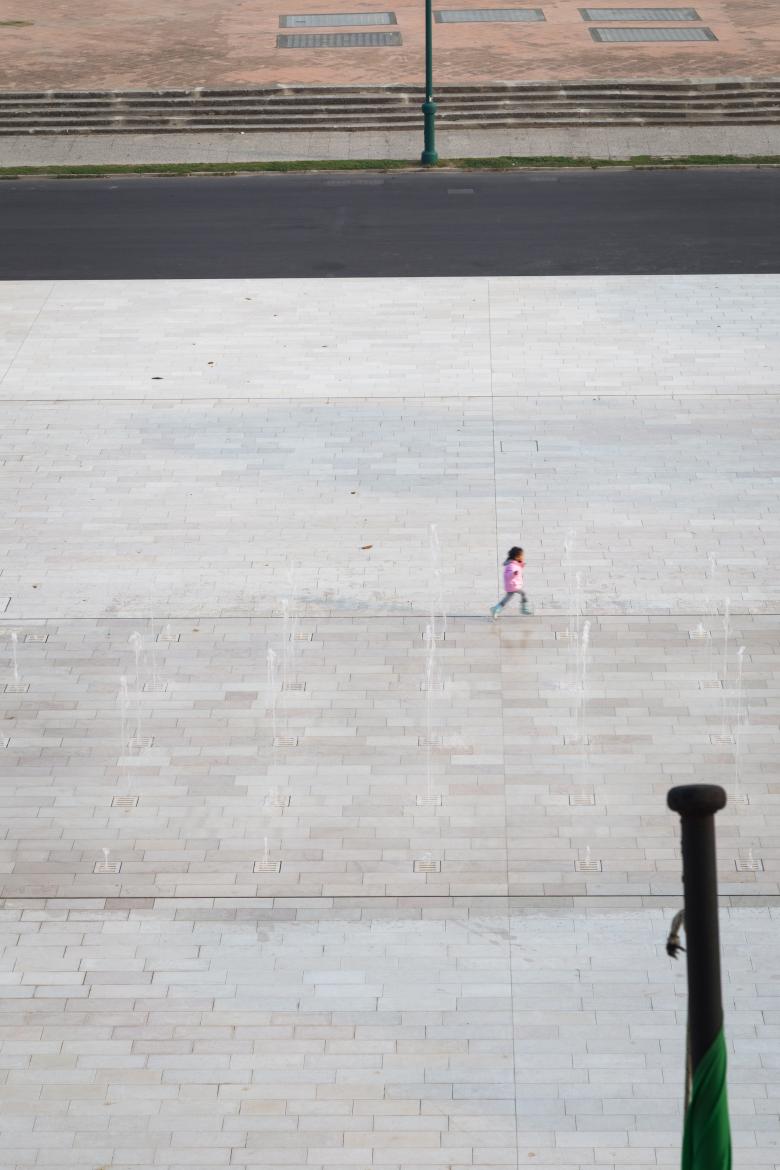 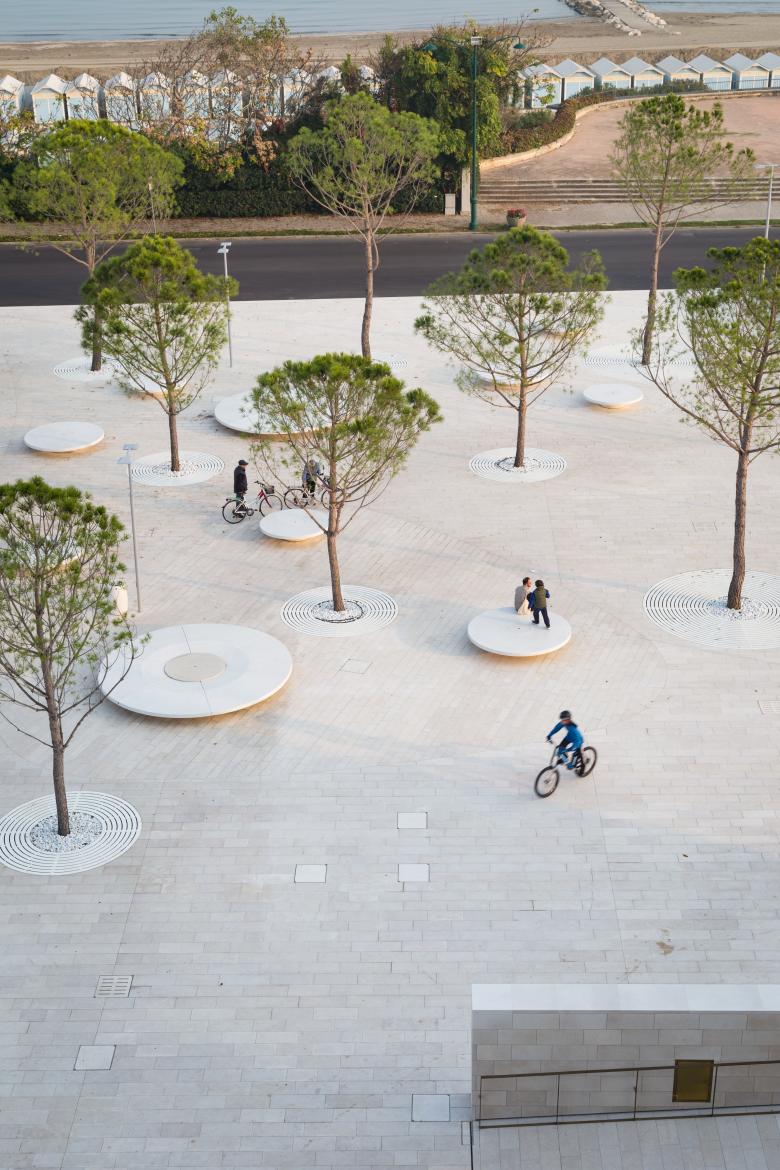 Piazza del Cinema by C+S Architects
In 1857 the construction of the first seaside resort in the island of Lido in Venice was opening a stage of splendour for the island when parties, concerts, events were happening. The two major hotels: Grand Hotel des Bains, completed in 1900 and Excelsior Palace Hotel, in 1908 were transforming the island of the Lido in one of the most desired and sought-after seaside resort in Europe. Three Palaces were foreseen to be built, but only two of them were, leaving on the third location a green space, which consolidated in time to become a park with important vegetation.
With the hit of the economic crises, a period of decline brought the disposal of the Grand Hotel des Bains and a lack of investment both from the private and the public sectors, being the Venice Cinema Festival the only international event which still continues the glories of the past, but only once a year.
Loosing its role as one of the most sought-after seaside resorts in Europe, the site hosted an international competition for the new Cinema Festival Palace. As part of the commemoration for Italian Unification, the construction stopped under bribe accusations of the public management team, leaving exasperated citizens and the Biennale with a big hole in the ground. Starting a series of conversations with the locals, we decided that the main aim of design was that to give back the citizens a well-designed and adaptable public space made of a square and a park, which would be transformed during the three weeks of the Cinema Festival or during the year. In this way, we turn the red carpet of the stars into a ‘white carpet', a place for all people, where the stars are the citizens of the Lido.
The task of the Piazza was also sewing together the heritage pieces (the two Palaces and the park), the latter being for us as important as the buildings as home to animals and enriching the biodiversity of the site. A carpet of white Apricena stone is laid among the buildings and the green and designed to highlight the curves of a never built third building, manipulated to be accessible to all or punctuated by precious insertions such as the brass railings, special surface treatments or gutters for water collection. Sustainability solutions are enhanced for water collection, reforestation of local trees.
The square is heightened from the original level to allow the view of the sea and is entirely designed using the monochrome Apricena stone. The use of a monochrome surface for the whole public space confirms and underlines the strengths of the dimension of the public space, avoiding the fragmentation of the use of different materials.
The design of the materiality of the rolled or sanded pieces of the stone, the water drainage system and the fountain - designed as thin cuts and shadows on the white surface of the stone, the brass or varnished steel railings, the benches in reconstituted natural marble stone, the treatments for disabled and visually impaired people, the newly planted and autochthonous maritime pines and the sinuosity of the garden- which is designed as a symbol of a third building which was meant to complete the square but was never built: all these element are designed as accents in the continuity of the monochrome materiality, vibrating to the light and changing every single moment of the day and of the year.
Portions of the square are also invisibly designed with thicker sections in order to be accessible to cars for special events. The use of durable materials is a fundamental element of design, especially in Countries like Italy where maintenance is not an asset.
The square, designed on the aim to serve the Venice Cinema Festival, is invisibly infrastructured to potentially allow the activation of events during the other months of the year, but especially to give back a free public space to the inhabitants of the Lido island: mums with prams, skaters, kids playing with the water fountain, old people relaxing under the shadow of the trees and watching the sea.
We are proud to have contributed to give back the citizens a part of the city. We strongly believe in the power of a free, well-designed public domain to be activated by people, their memories, their dreams and their experiences.
A constant process of erosion of the public space is happening in most cities of the developed western Countries. Cappai and Segantini believe in the power of free, weel-designed public space to be potentially activated by people and communities in the aim to enhance the identity of the place. The project of the Piazza del Cinema in the island of Lido in the Venice Lagoon is achieving the scope.