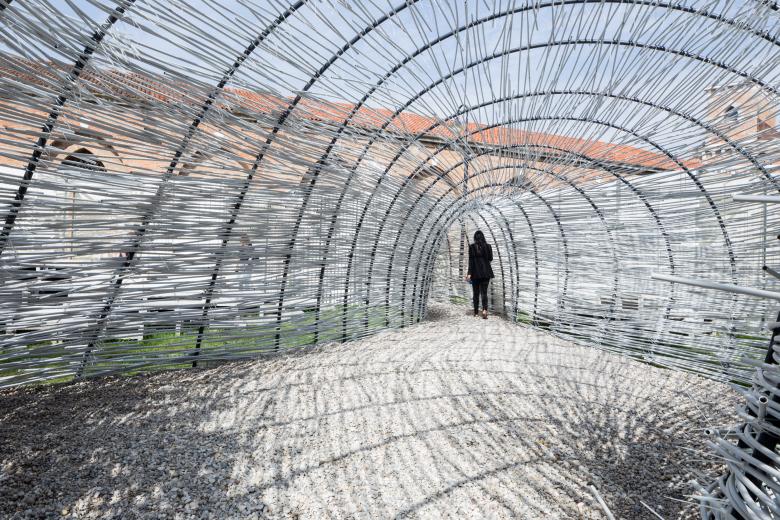 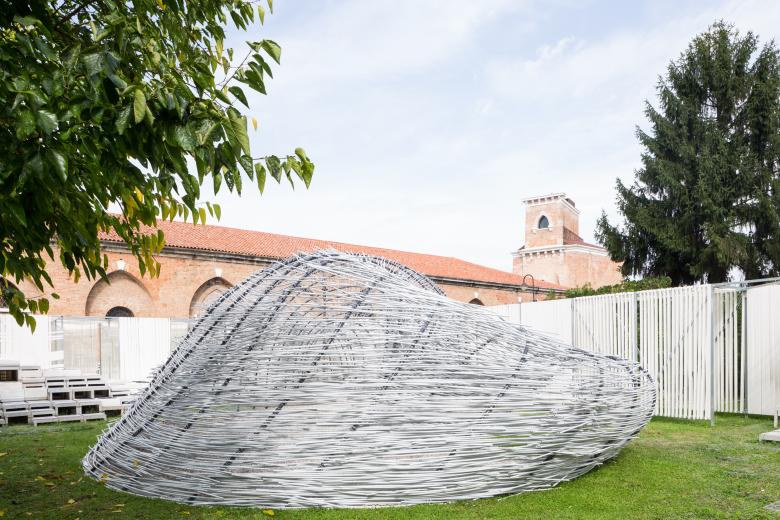 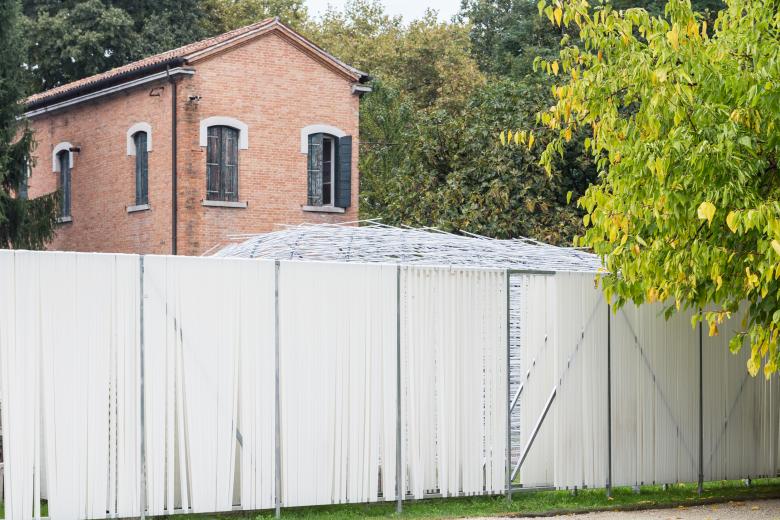 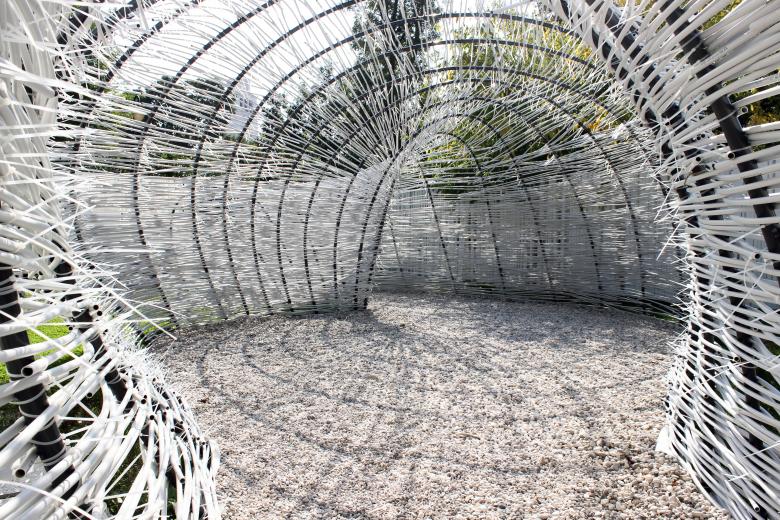 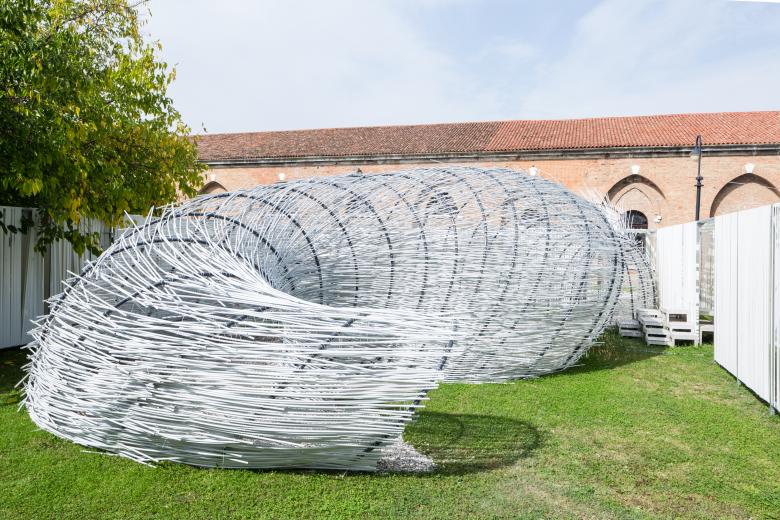 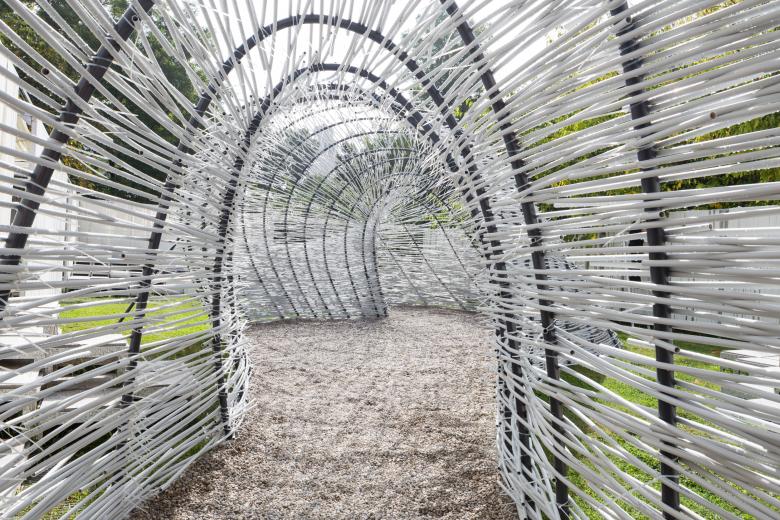 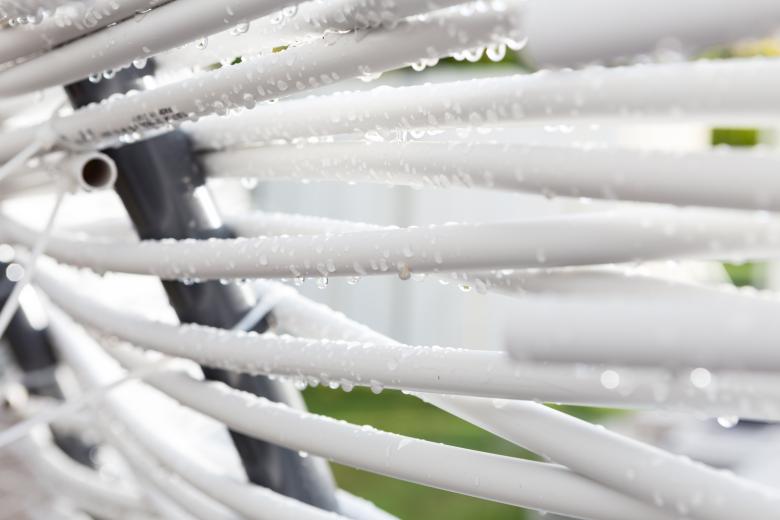 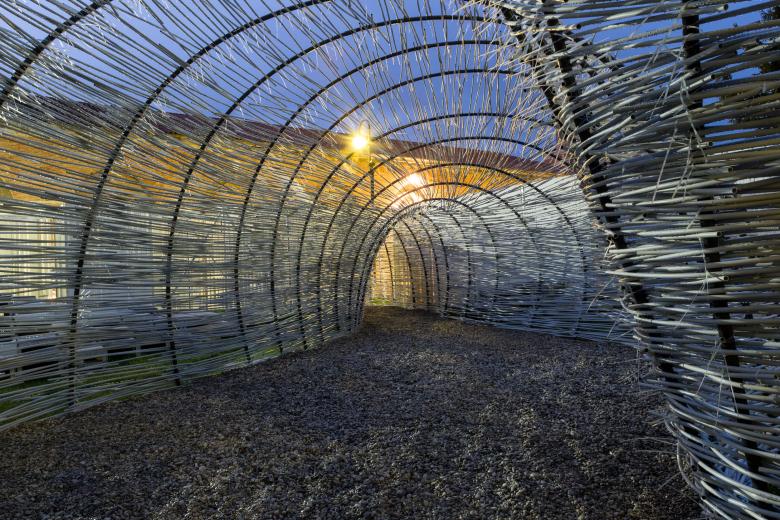 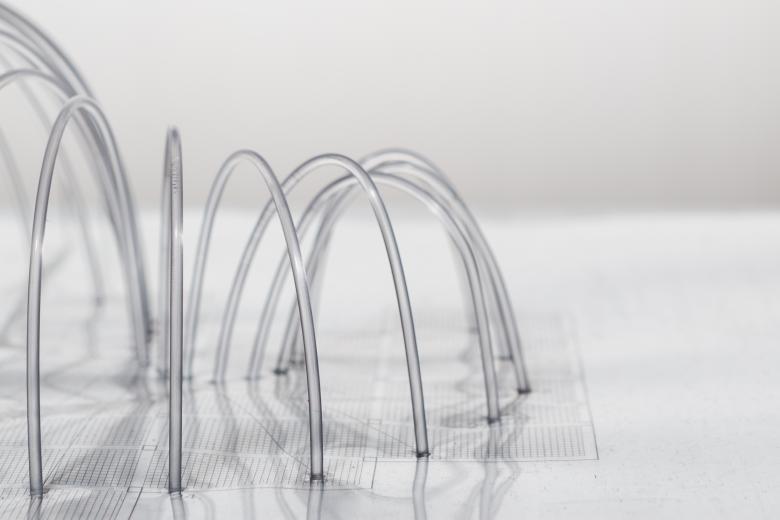 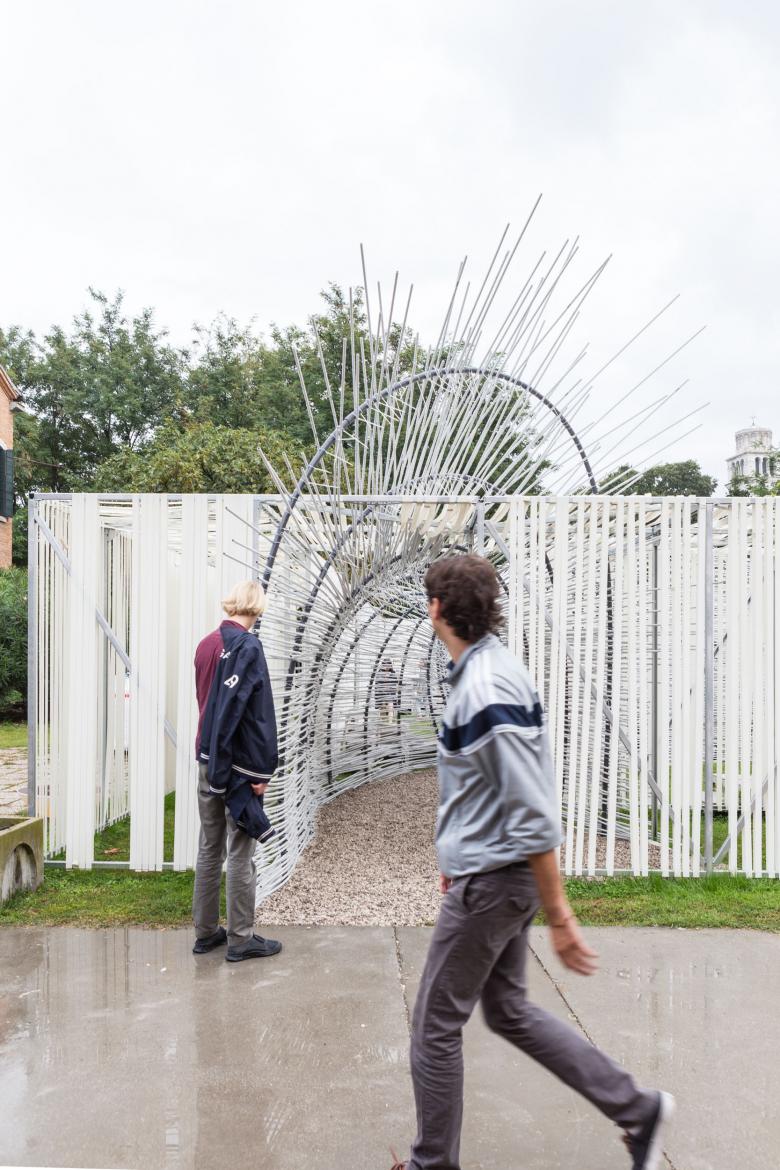 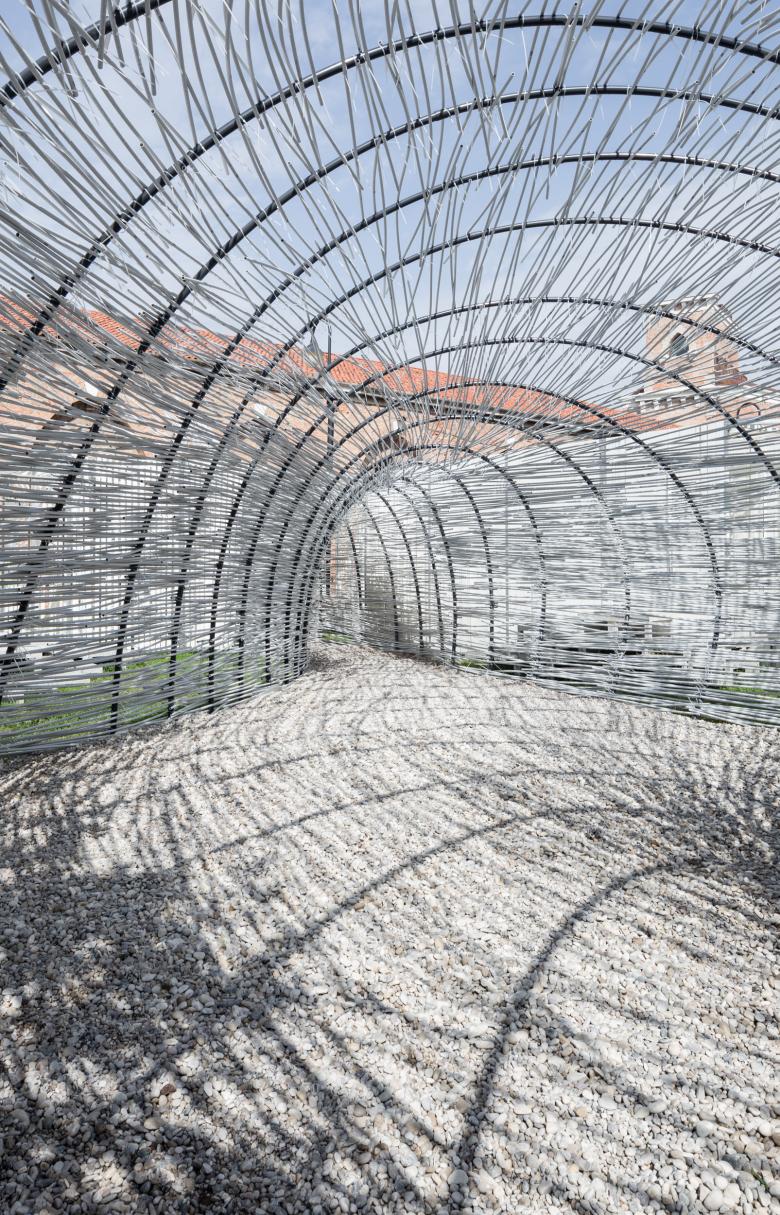 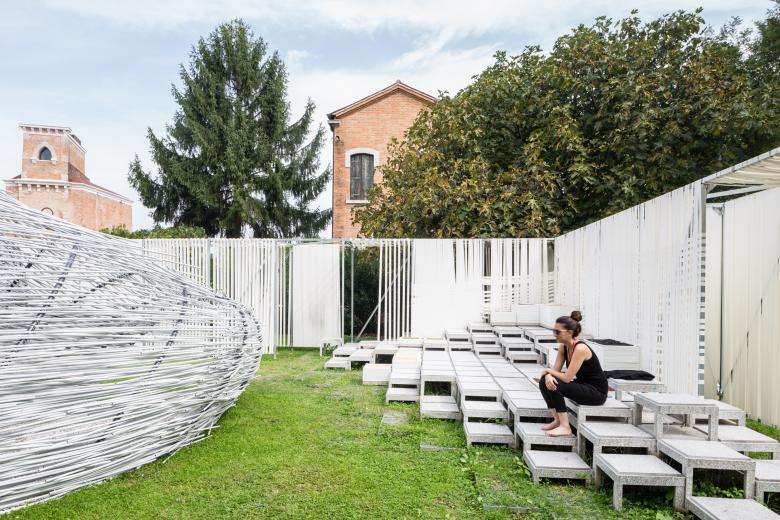 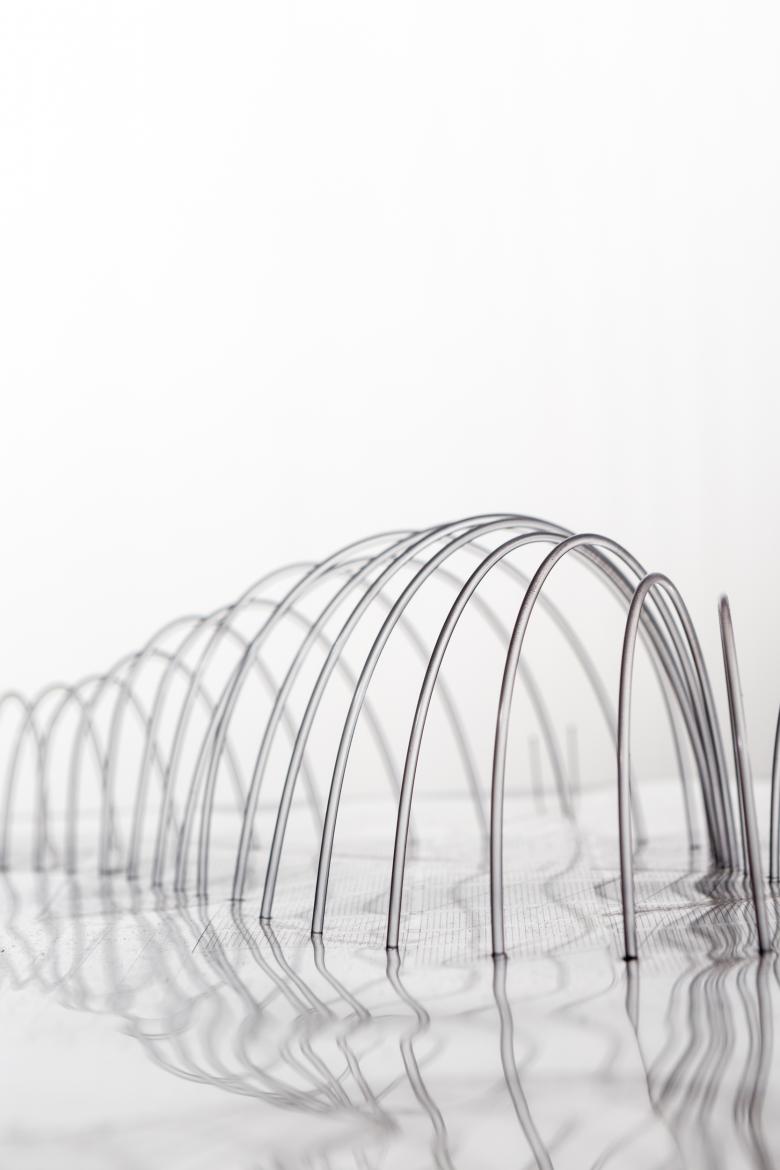 “The Dome is an experimentation that goes beyond traditional architectural form and composition to foresee fundamental aspects for Chinese architectural space.”

The Bug Dome workshop was a moment of cooperation between the team of curators of the Chinese Pavilion of Venice Biennale: Jiang Jun, Director of Urban China Magazine, Pier Alessio Rizzardi, founder of TCA Think Tank, the team of the Shenzhen and Hong Kong BiCity Biennale, Ole Bauman, Du Juan, Ou Ning, and Hsieh Ying Chun 謝英俊, Weak! Architects. The structure has been built for the meta-exhibition Synergy & Symbiosis Event that shows the best works of the five previous editions of the BiCity Biennale from 2005 to 2014.
[embed]https://vimeo.com/111393983[/embed]
The workshop is based on the experience of self-construction that took place in Shenzhen in 2009, which at that time had created an installation, small, spontaneous and illegal for residential and social club use. It was a place to host meetings, exhibitions, series of conferences and debates to divulge the concepts of Biourbanism and Urban Acupuncture supported by Hsieh Ying Chun 謝英俊, Weak! Architects designer, with Marco Casagrande, and Roan Ching-Yueh 阮慶岳 of the Cocoon Project in 2009.

The Parasite Installation is the outcome of the cooperation between the architect Hsieh Ying Chun 謝英俊 and TCA Think Tank, led by Pier Alessio Rizzardi and Zhang Hankun, together with students from Europe, Australia, and China. The intensive five day’s workshop had created the installation of what has been renamed as Parasite Pavilion of the exhibition in Biennale. The parasite pavilion Workshop is organized to create the installation for the Synergy & Symbiosis event, which is realized on the vacuum in the garden outside the Chinese Pavilion to attract the visitors arriving from Giardini and Arsenale exhibition. The Dome offers shade, protection, a place where to escape from the great content of Absorbing Modernity exhibition, allowing the direct experience to elements of architecture.

The Bug Dome Structure was originally developed for the Shenzhen Hong Kong BiCity Biennale in 2009 by WEAK! Architects as an icon of illegal architecture for the use of the people. Today the structure in Venice is used as physical research of fundamental elements of the traditional space. Understanding the basic concepts behind traditional Chinese space creates a reference to developed the design. A layer of nonwoven textiles makes the support of the structure and the protection of the ground. On the top, a metal net is a grid to locate the position of the feet of the arches using coordinates. The workshop uses contemporary and locally produced material, such as wires, metal nets, and PVC pipes. The pipes are bent to create self-sustaining arches that guarantees zero impact, as well as a temporary environment for the fragile Venice Biennale venue.
The geometry follows two guiding curves defining the surface edges coming from the interaction between the existing structure and composition of the internal space. The 3d model shows the length of the arches, and they are cut according to the measures. At this point, the arches are ready to be put in tension with wires and fixed to support creating the self-sustaining system. Temporary structures bear the arches meanwhile, PVC pipes are weaved on the arches and fixed using plastic pipe tie. The finishing is a gradient of sizes of gravel placed on the ground according to the scale of the interior spaces.

The interior is the result of 4 systems shaped by a single element as a curved mesh, creating different elements of the architecture. The entrance shows itself, inviting visitors to be adsorbed from the surrounding, hiding the main room, and creating expectations, pushing the inside exploration. The corridor opens to the main space, where the scale gets wider as the texture of the ground gets bigger, changing the equilibrium and the sound of the experience.

The space recompresses next to the exit outlining the view of the Arsenale watchtower on the other side of the canal and bringing back the visitors to the Venice Biennale environment.

The Dome is an experimentation that goes beyond traditional architectural form and composition to foresee fundamental aspects for Chinese architectural space.