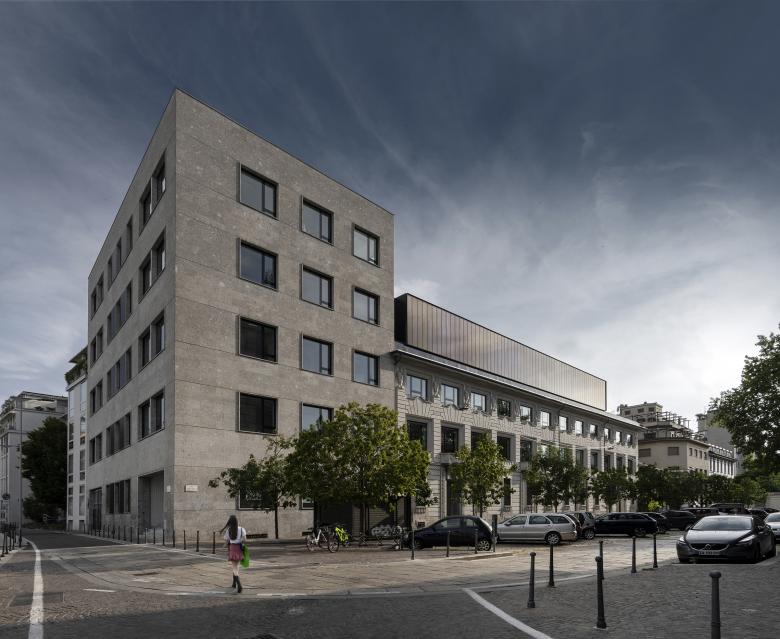 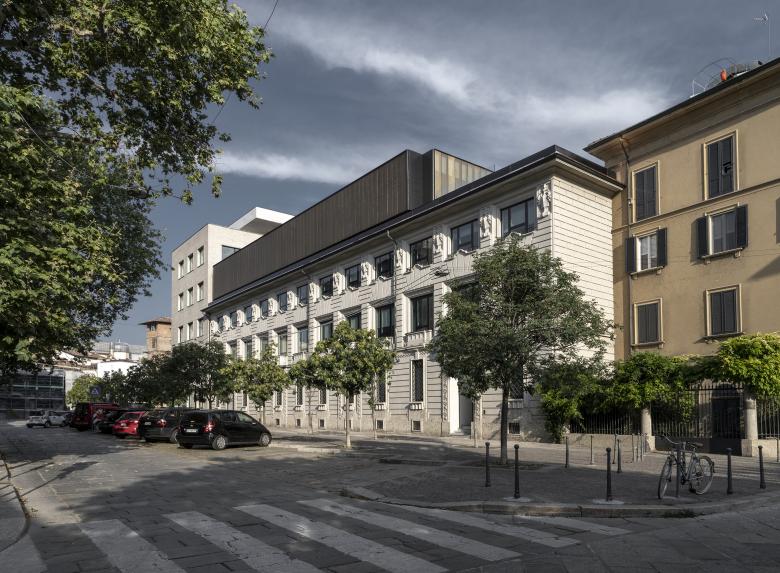 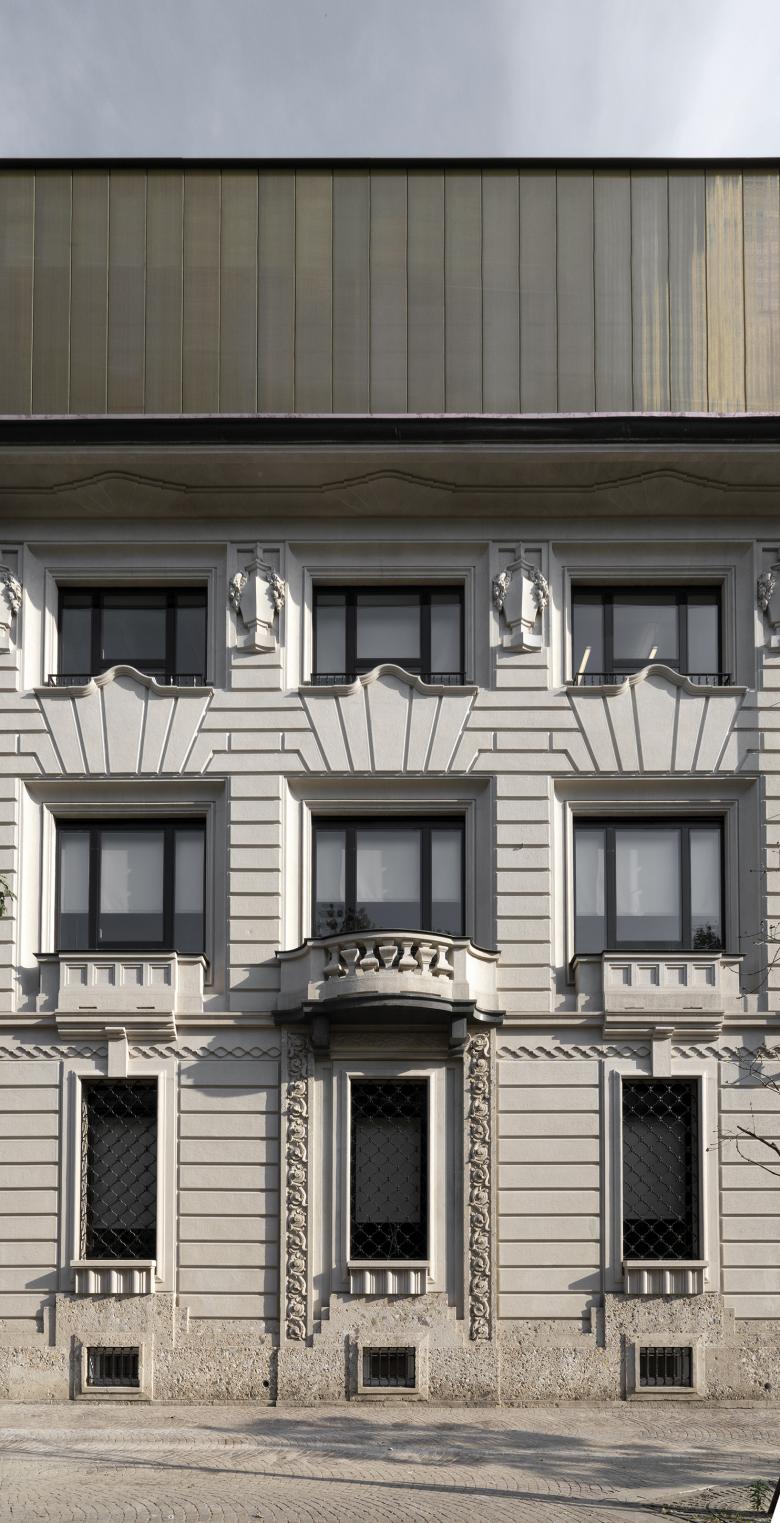 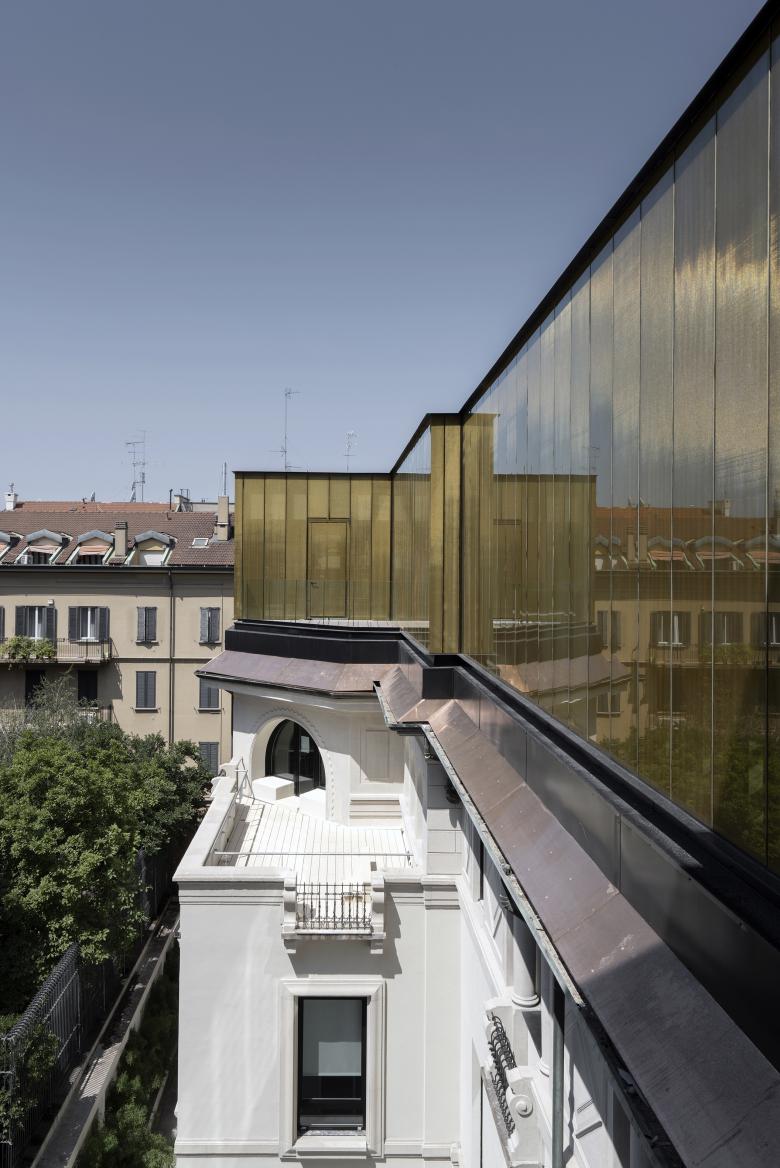 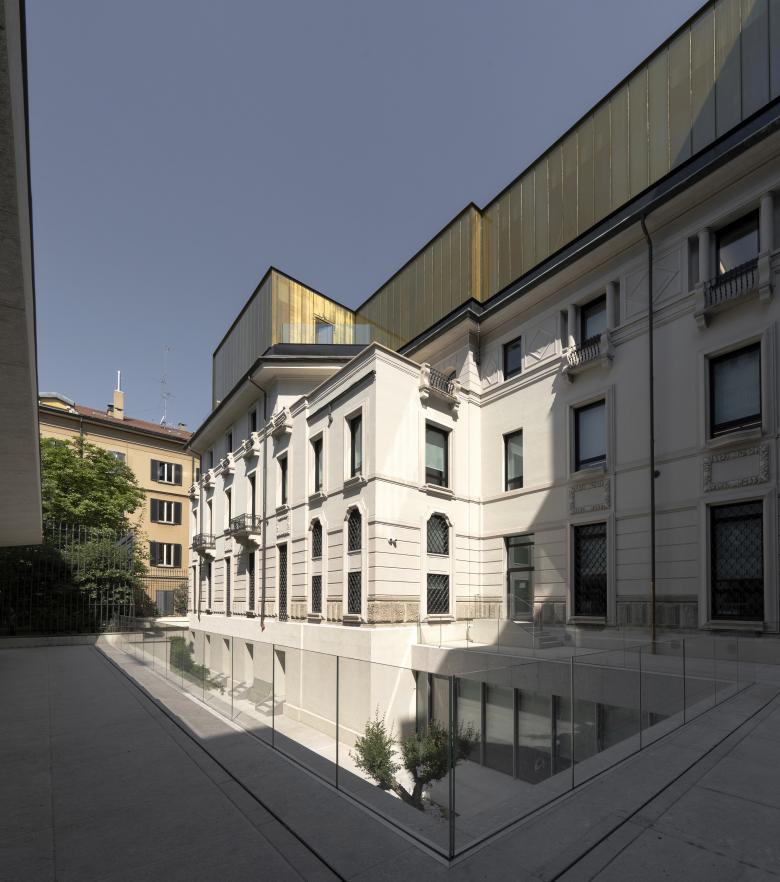 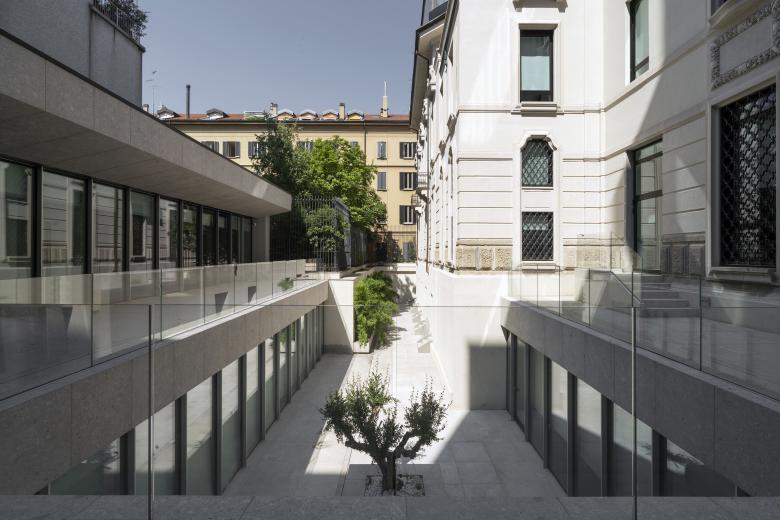 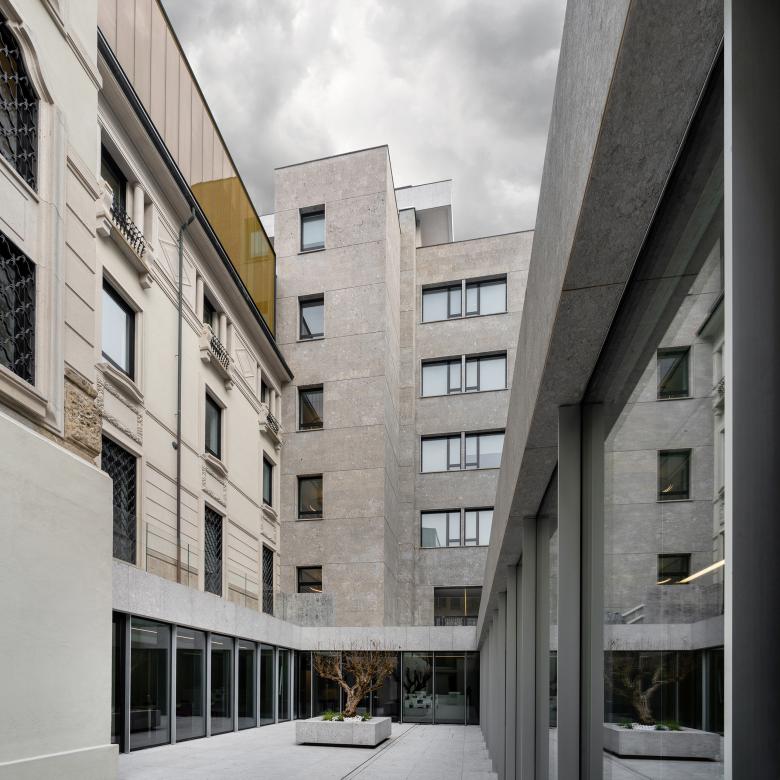 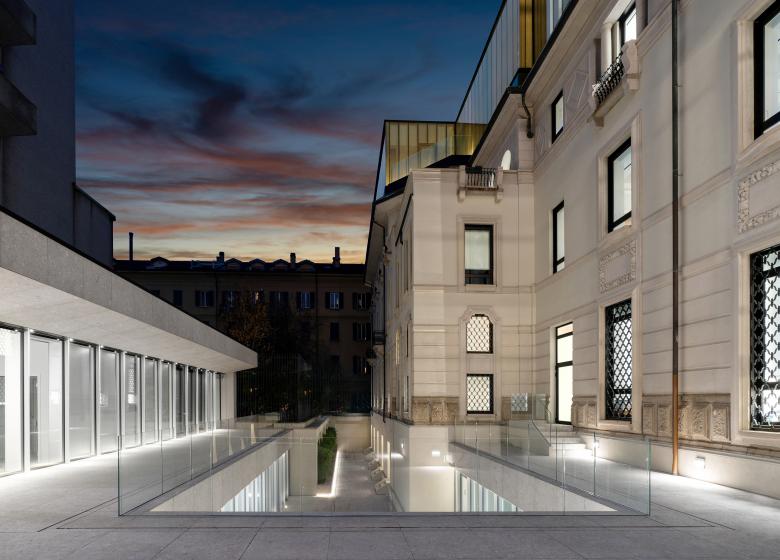 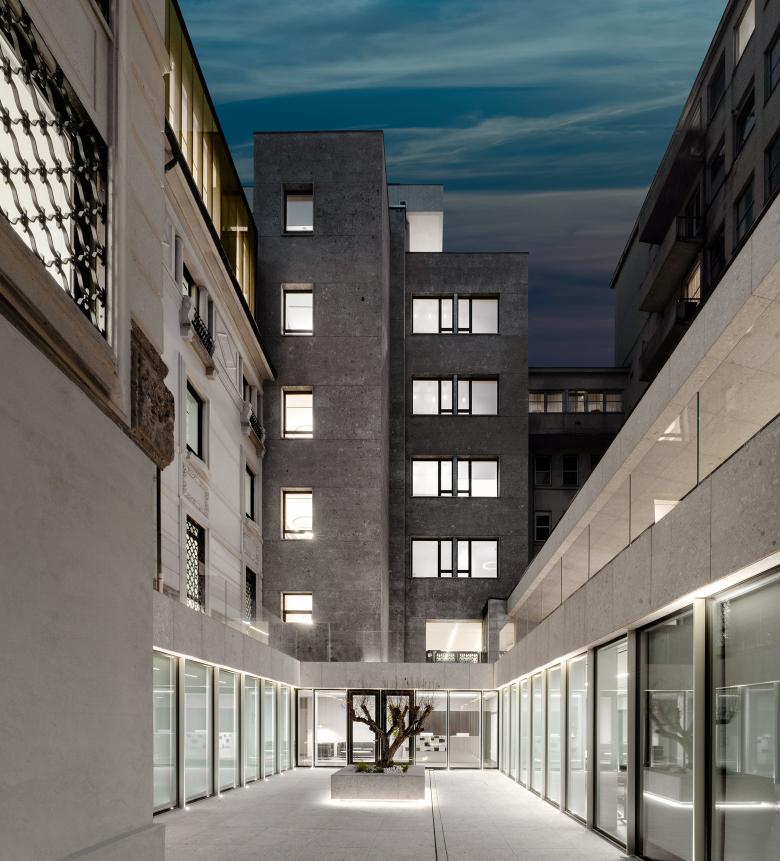 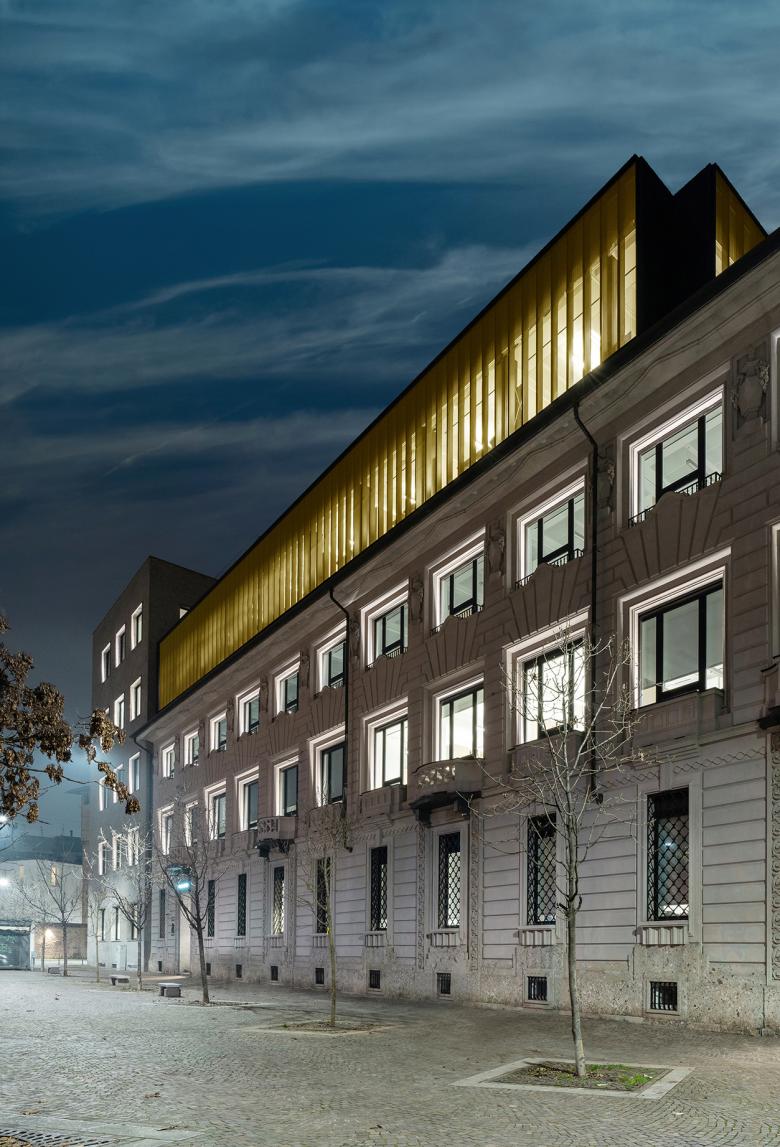 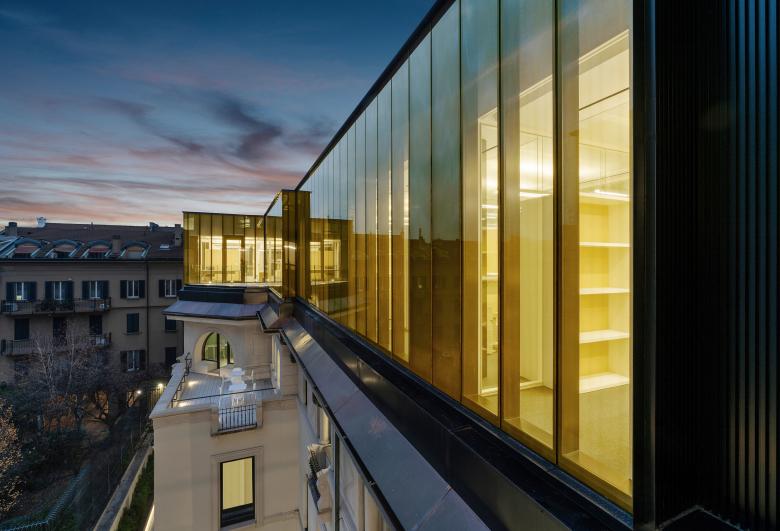 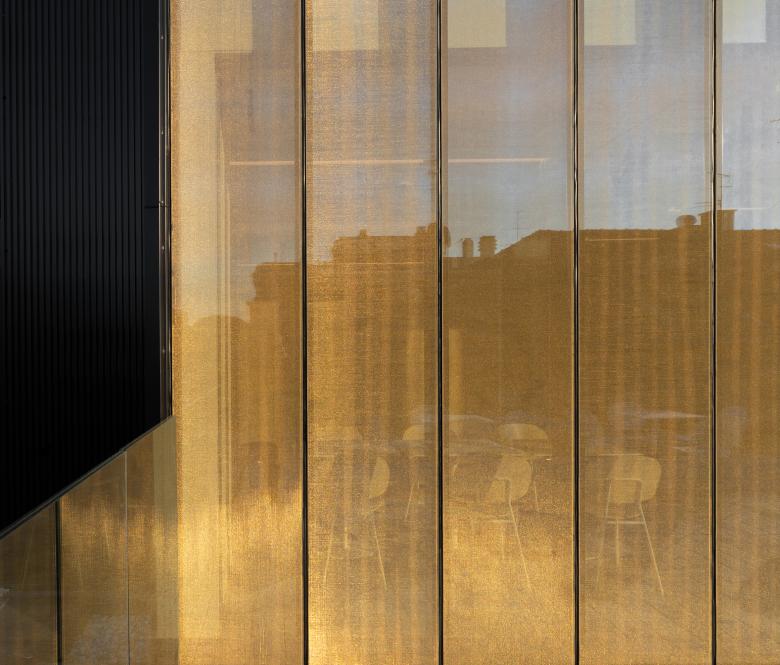 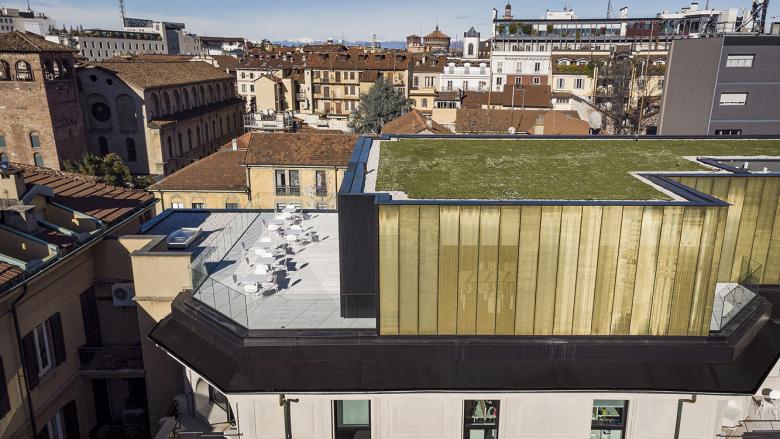 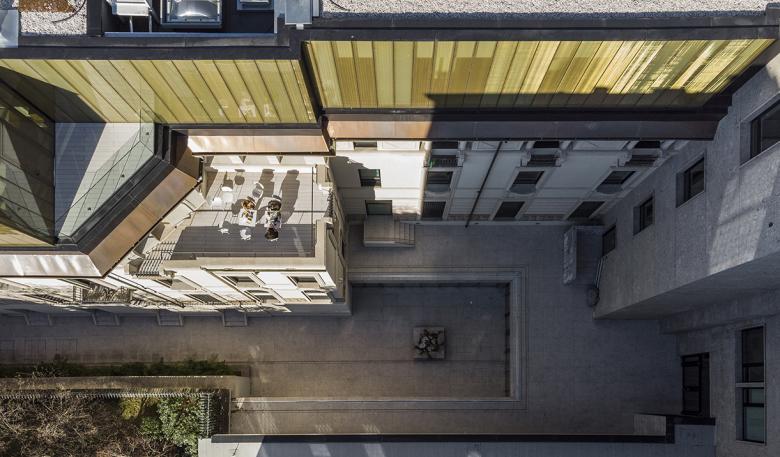 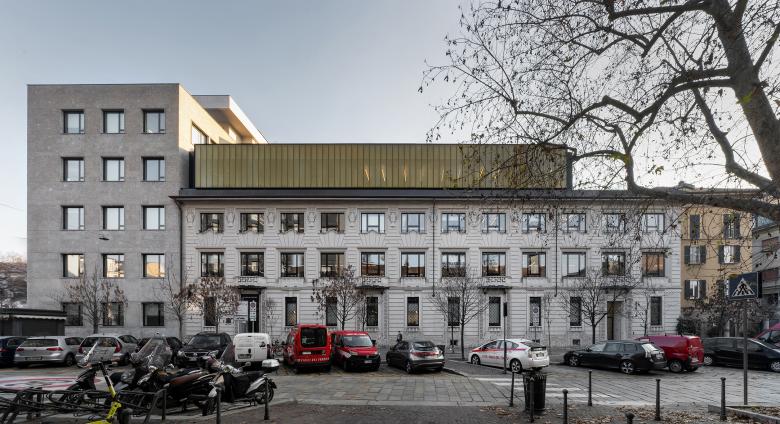 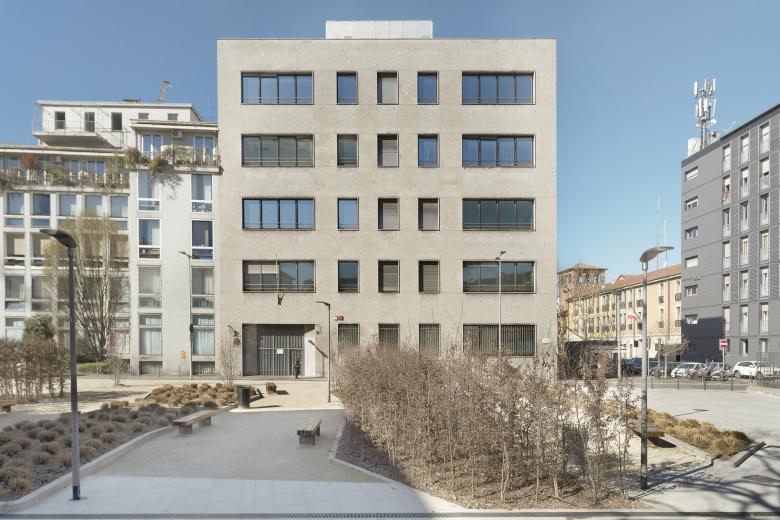 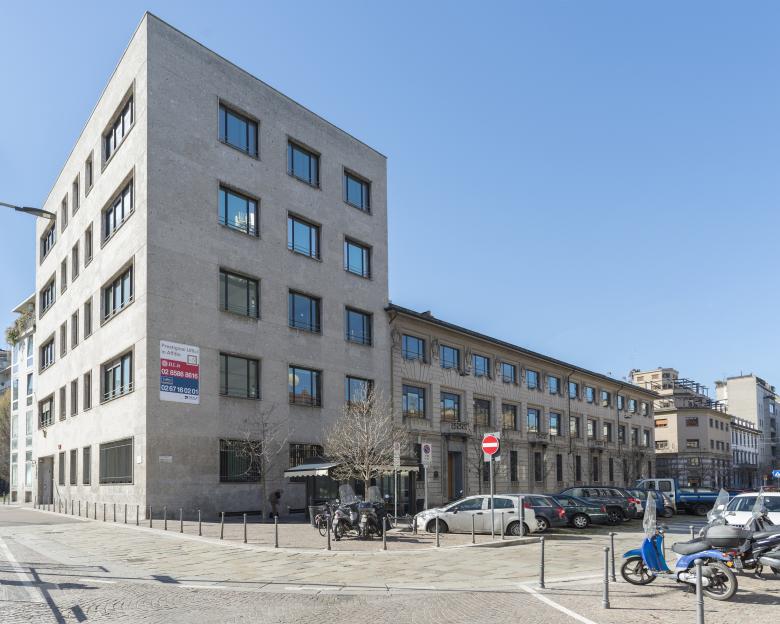 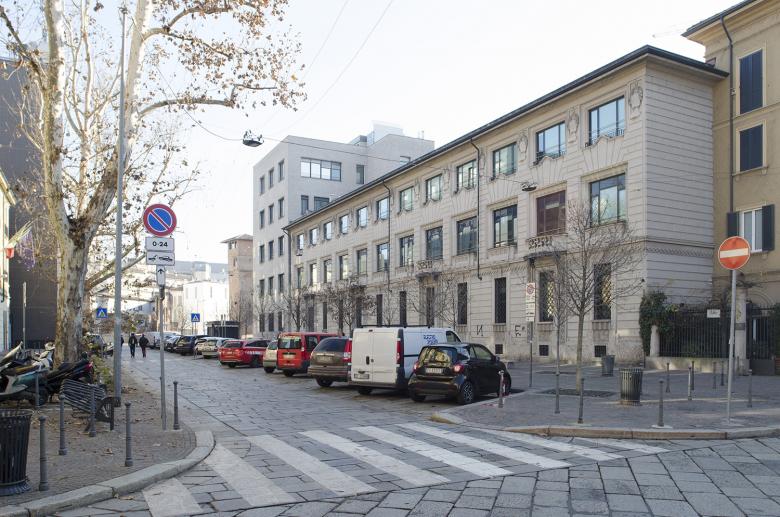 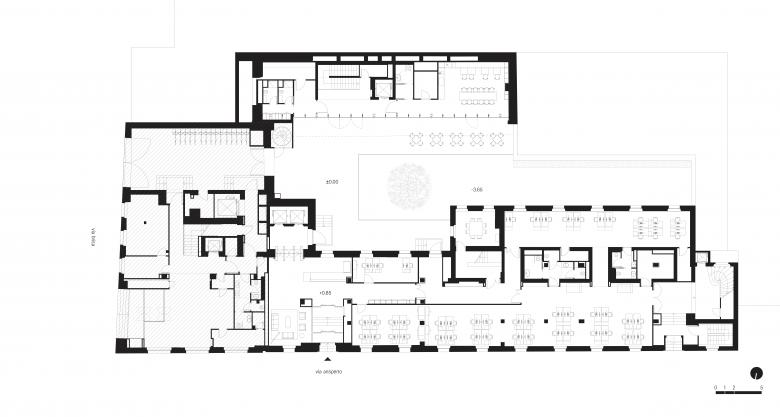 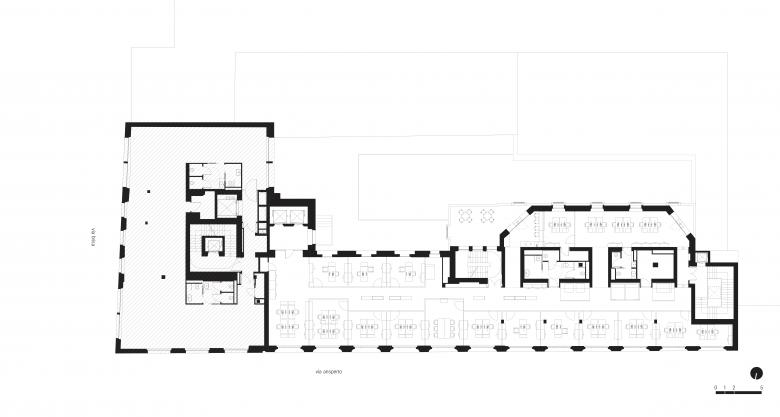 Park Associati's retrofitting project concerns both blocks of a building by Pietro Portaluppi situated in the centre of Milan.

The complex consists of two buildings of three and five floors respectively, completely different in style, having been designed almost twenty years apart. Portaluppi intervened for the first time in 1919, creating smooth facade with influences of the Viennese secession, and then a second time, in the mid-thirties, when he designed a volume, enlarged with two floors in the second post war period, decidedly
modernist.

The total refurbishment has enabled the redistribution of the volumes of the existing complex and all its interior spaces, which were made more fluid and functional and better suited for use by at least two different tenants.

The basement floor of the existing internal courtyard - previously used as a warehouse - was recovered.

The courtyard created by uncovering the yard's floor is now overlooked by entertainment spaces and meeting rooms. The mineral qualities of this new patio completely covered in ceppo stone is broken up by a large pomegranate tree, positioned in the area facing the wholly-glazed internal rooms. The view of the greenery and the private outdoor space can thus be enjoyed. The lower ground floor houses the library of the law firm that will occupy this part of the complex. Unlike the other spaces, where floors and furniture are predominantly made of dark wood, the library is furnished with light oak furniture and finishes that lend the room a less austere feel.

On the ground floor of the courtyard overlooking the patio, from the building that used to house the garages, amenity facilities have been created; the cafeteria and the locker room area for sports enthusiasts. Designed to aid sustainable mobility, the building includes a large external area for bicycles.

The added storey built using the recovered volume adds an extra office floor to the building. Its style is completely different from the two buildings and, by emphasising the different historical era, becomes a contemporary architectural element in its own right.

Instead of choosing protective dark glass, a metal mesh - brass-coated on the outside and black on the inside – was used between the two chambers. Despite its matt effect, the glass surface is in harmony with the surrounding materials, at the same time offering protection from the sun.

A thorough clean of the tower's rationalist façade has brought to light the bright grey colour of the Ceppo di Grè. The rhythm of the façade’s openings has been updated by inserting small pillars in the glass parts as well as corrugated sheets - the same used for the added storey's glass - in the spaces between the openings. The window frames have been covered with glass, thus maintaining the essential quality of the design of the facades of both buildings. This choice combines internal functionality and with the façade's distinctive aesthetics.

The entrance and reception areas of the two buildings are independent. The linear furnishings chosen for the entrance halls create environments that are in harmony with the colours of walls and furniture. As a tribute to Portaluppi, portions of the counters were covered in polychromatic marbles, the Milanese designer's favourite materials.

While offering acoustic privacy, the offices of the international law firm occupying the lower building do not sacrifice transparency and light, also guaranteed by the choice of white furnishings. The interior design project combines the modularity of a contemporary space with the elegance, flexibility and privacy that are the requirements of this type of activity. The fully glazed office space looks onto the two sides of the corridor that runs through the entire floor. Thanks to the refurbishment of all the plants and the internal space distribution, the spacious premises offer light, transparency and comfort.

The photovoltaic panels on the tower's roof, the use of ground water for geothermal energy and the added storey's green roof aimed at achieving thermal mass are the main factors that make the building energy independent. The building is certified LEE Gold V4 Shell & Core.