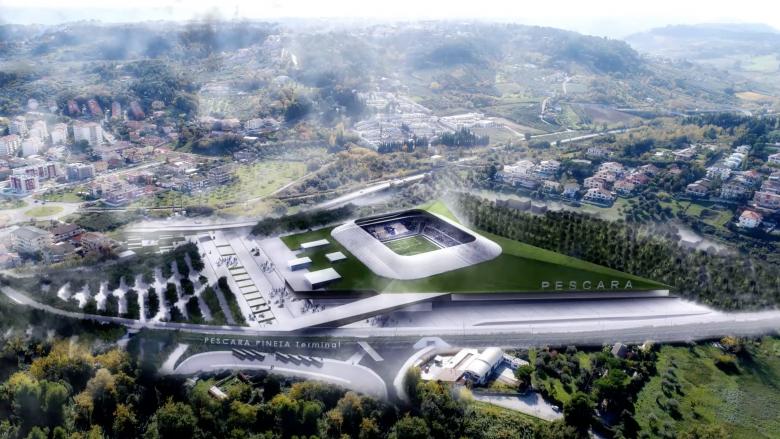 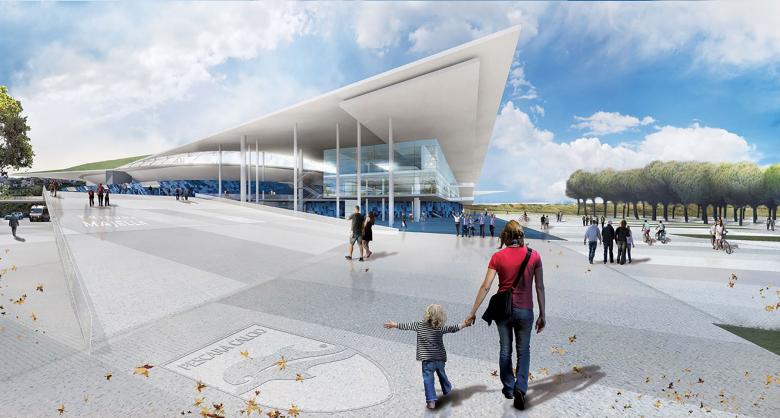 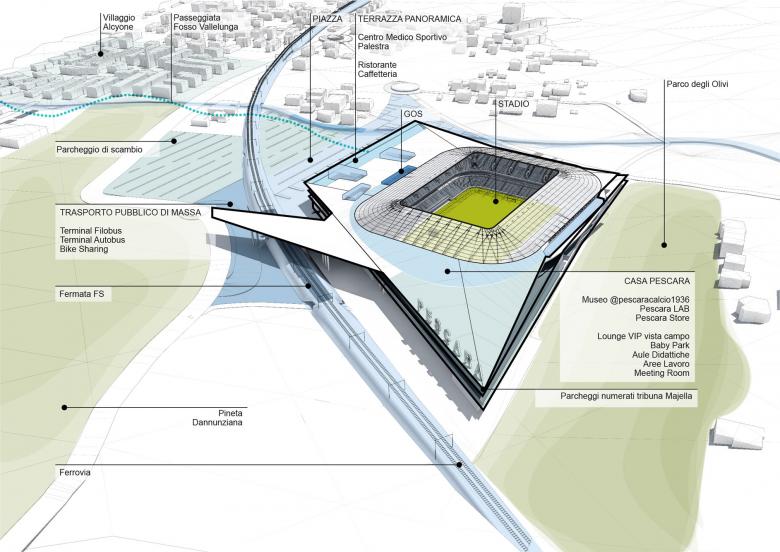 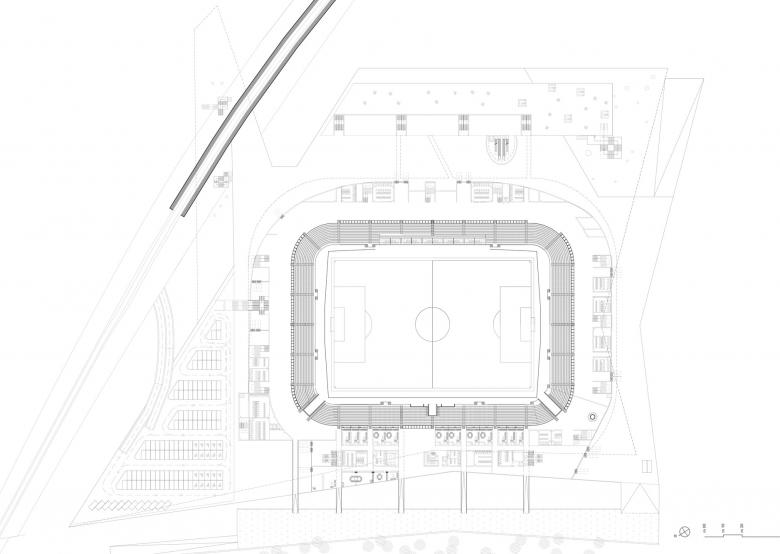 The project for the new Pescara Calcio stadium is located in the southern part of the city between the railway embankment and the hill. This is an area of ​​particular importance from the point of view of transport, as the main backbones of Adriatic mobility converge there: - North-South State Railways Line, a new train stop is planned. - Adriatic State Road. - Mass public transport terminal. - State road ss714 which connects directly with the A14 motorway and with the equipped entrance to the city and its metropolitan area. The site is also located near the large dannunziana pine forest which, for about fifty-six hectares, develops parallel to the coast, becoming a "green infrastructure" that reconnects a series of noteworthy elements on a territorial scale, including the current Giovanni Cornacchia stadium, the former Aurum, the Gabriele D'Annunzio theater, the Flaiano auditorium. These two territorial instances (artificial and natural) become the bearers of the design strategies. The idea is to think of the project strongly integrated with the soil on which it rests, a new territorial centrality capable of triggering a process of regeneration of an area currently degraded and marked by some environmental detractors. The project starts from an extensively studied area, in which demolition of some transport infrastructures are planned for about 2000 ml, giving the Pineta D'Annunzio over two hectares of new plant and reaching the Vallelunga ditch and the Alcyone district . The idea of ​​settlement is oriented to the minimum impact with the soil. The relationship with the slope becomes the information element to search for the optimal position of the artifacts, minimizing excavation operations. The excavation soil will be kept as much as possible within the study area, usable for environmental mitigations and naturalistic engineering works and above all avoiding transporting it to landfills. The surfaces are largely draining. This is a soil project that merges with the pine forest and generates the "pine forest stadium". The main elements of the project are: the green roof: conceived as a clod of land in continuity with the hill, the textile covering that is like "sails" during the day and lanterns at night; an important territorial signal for an area that is configured as the southern gate of the city. A "wing" that crosses the railway line marks the intermodal node; a "pier" below which there are: the new railway stop, the mass public transport terminal (TPM), the interchange parking, the city bike terminal and sustainable mobility. These elements, in addition to being important components of the project for the new sports center, belong to the city and the territory, taking on an important role in defining the identity of this part of the city. The intervention is conceived as a piece of territory, not only as a sports venue, with the necessary functional mix capable of making it attractive throughout the year and not only during the few days of match games. Next to the sports area there are spaces for socializing, commercial and recreational activities, conference rooms, a large square (covered and uncovered), the Pescara house, a panoramic terrace overlooking the Pineta D'Annunzio / Adriatico. The stadium has a capacity of 20,700 seats, all covered, with a great quality of the spaces and optimal visibility between 8.50 and 37.00 meters from the pitch line. To have a barrier-free stadium, open to all, great attention is given to accessibility and the possibility of multiple fruition experiences. There are sky boxes, ground boxes and areas dedicated to families and entertainment directly facing the playing field. Environmental sustainability, as well as social and economic, is one of the themes of the project. Site sustainability, water management, energy management, materials and resources are aspects that will be applied at different scales of project, construction and management. It is an intervention with a strong social value, as well as infrastructural and urban.