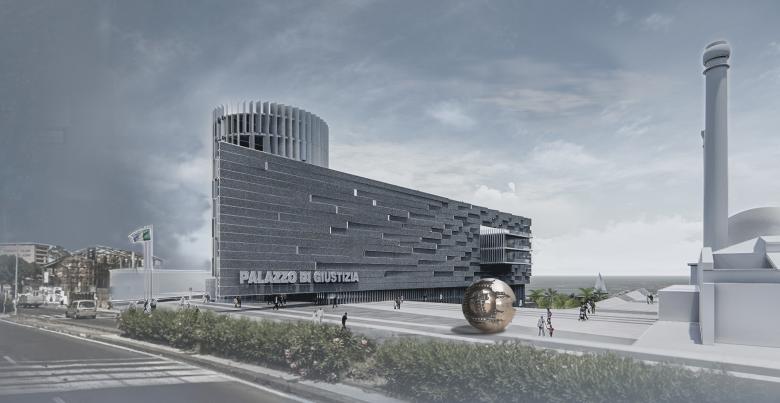 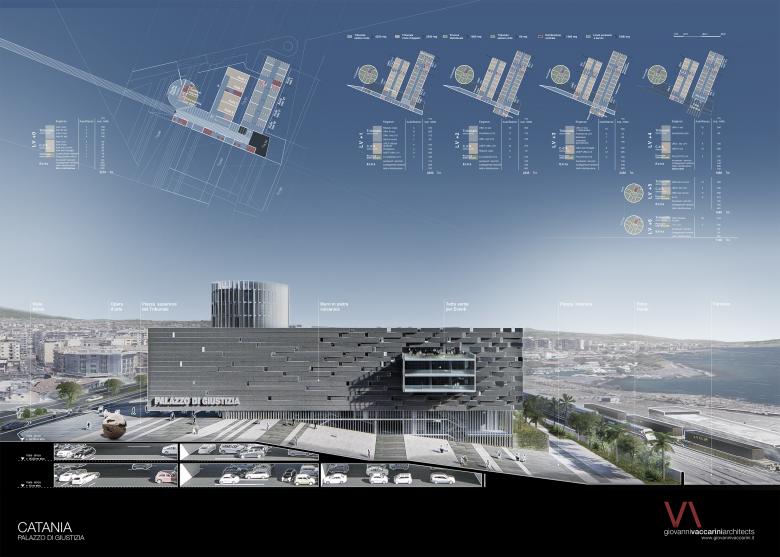 The project for the new Palace of Justice in Catania is a landscape project. The urban context and the existing landscape constitute the matrix from which the project takes shape. The project idea starts from the design of open spaces, public spaces that aim to become the hub of the collective life of the neighborhood.
The building stands in alignment with the building of the comprehensive "Santa Giuffrida" institute, defining a new square on the southern edge that overlooks the sea.
The square is a public space that connects with the congress and exhibition center “Le ciminiere” and defines the terminal of piazzale Asia.
The new courthouse overlooks the square with a long wall made of Etna lava stone. It is a wall that lights up with the strong light of the south with a series of inlays and splinters that lost in the horizon of the sea. They’re like petrified waves on which are engraved the names of the magistrates and men of the law who have made the history of the city.
It’s a highly iconic intervention that give us a unitary and monolithic image of the Palace of Justice. Public spaces are an integral part of the volumetric architecture: “open-air rooms”.
The public spaces open towards the city and the landscape and at the same time allow a series of differentiated accesses to the new palace of justice.
The urban and natural landscape are reconnected with the project of the new palace of justice.
There is an alternation of open spaces: the new "square of justice", scenic backdrop of piazzale Asia and belvedere on the sea.
The gallery of lost steps: a glazed gallery arranged parallel to the long lava stone façade.
Green roofs, terraces: the roof of the buildings is green, a passive thermal insulation technique which avoids the phenomenon of “heat islands”.