Michel Carlana (Ph.D., Architect), Luca Mezzalira (Architect), and Curzio Pentimalli (Architect) are graduates of Università Iuav di Venezia, a university with which they currently entertain collaborations and where they undertake research and teaching activities. In parallel to this academic activity, they engage with the architectural profession through participation in international competitions and local job orders.
Since its establishment in 2010, the practice has developed a number of projects, amongst which are “Magic Carpet” (runner up at Europan 10 in Montreux, Switzerland), “Kulturbaum” (winner of the international competition for the new municipal library in Bressanone, Italy), “Chapeau” (winner of the international competition for the construction of a sports centre and the renovation of an events hall in Les Bois, Switzerland), and “Wunderkammer” (winner of the international competition for a new music school in Bressanone, Italy).
In 2011 Carlana Mezzalira Pentimalli was indicated amongst the most promising Italian architectural firms under 40 years of age by the jury of the “New Italian Blood” award, while a year later, in 2012, it won the “Young Italian Architects” award, becoming the best Italian studio under 35 years of age. In 2013 the studio won the “Città Impresa” award, and, in 2014, with the “Sonika” project, the “Territorio per azioni” prize awarded by Confindustria, the Italian confederation of businesses.
The practice’s ambition is to turn urban planning and architecture into a simple, durable, organic, precise, and necessary activity, trying to entertain with tradition a dialogical, rather than submissive, relation. Understanding a project as an opportunity to reinterpret a space and a place.
They live and work between Padova and Treviso, Italy. 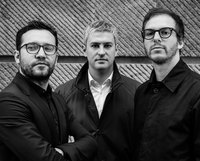