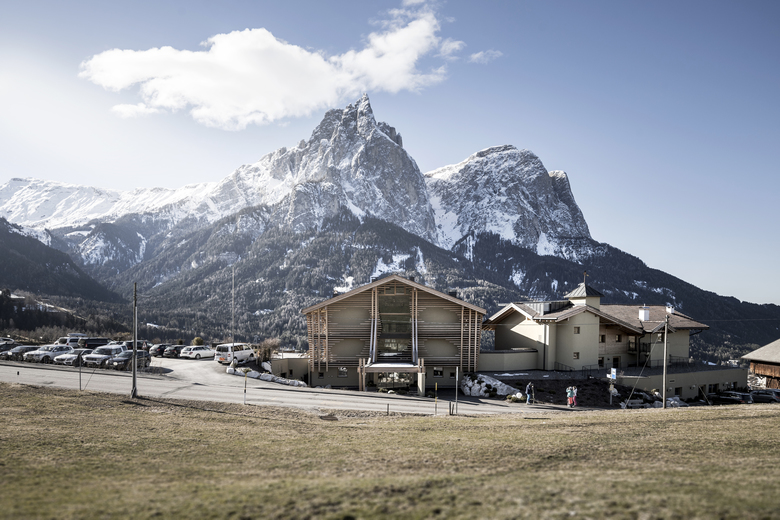 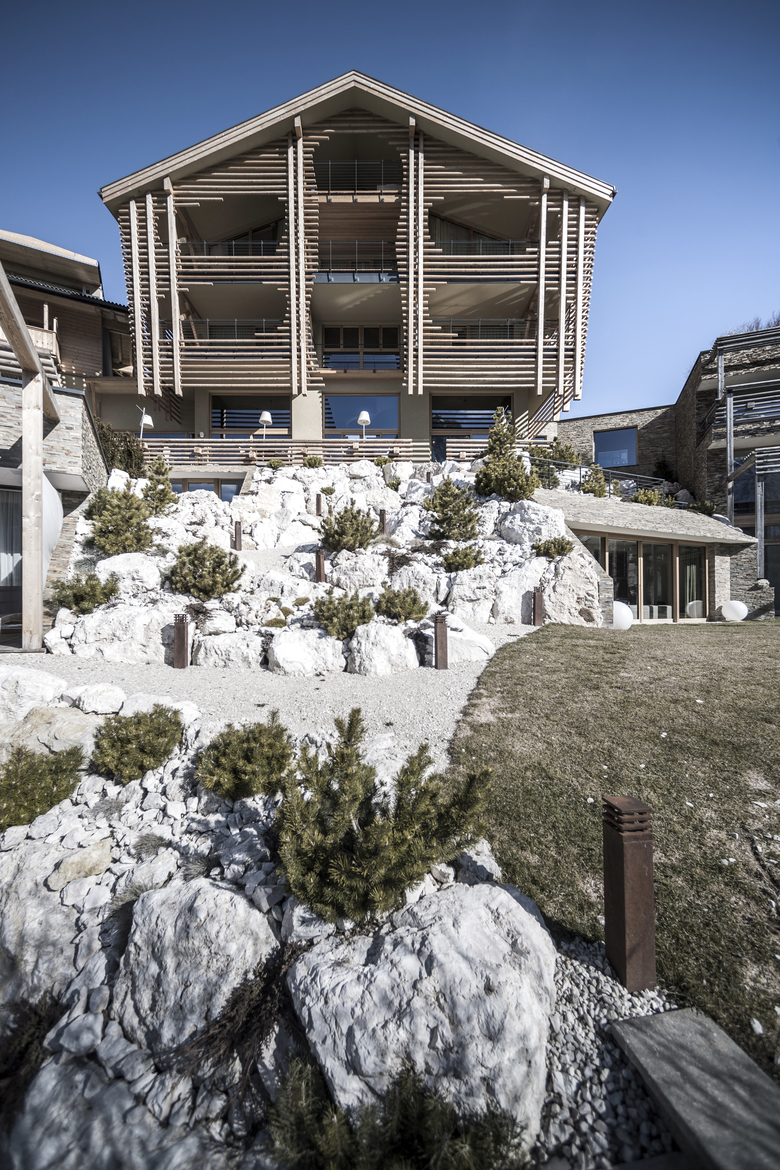 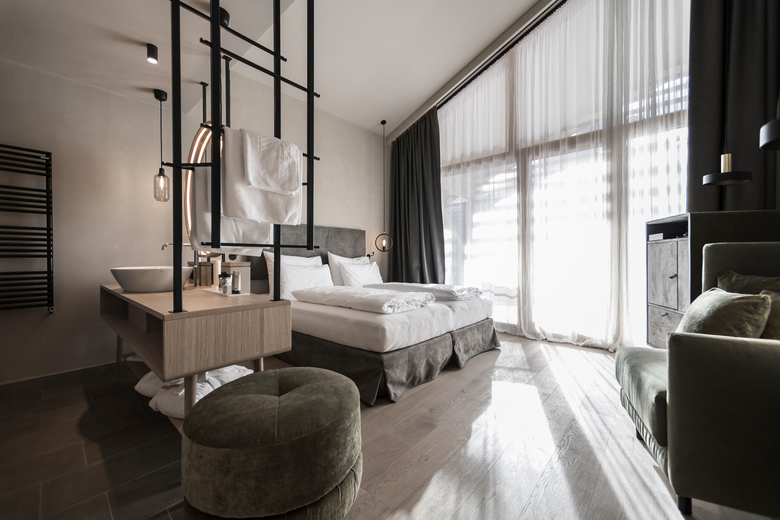 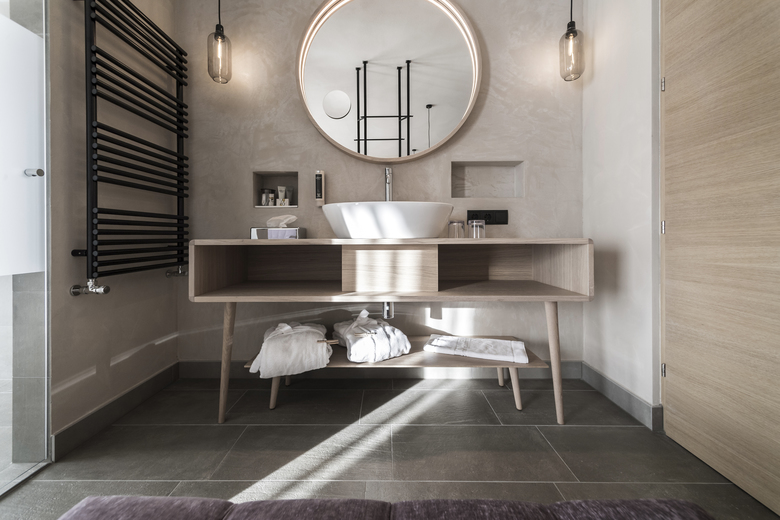 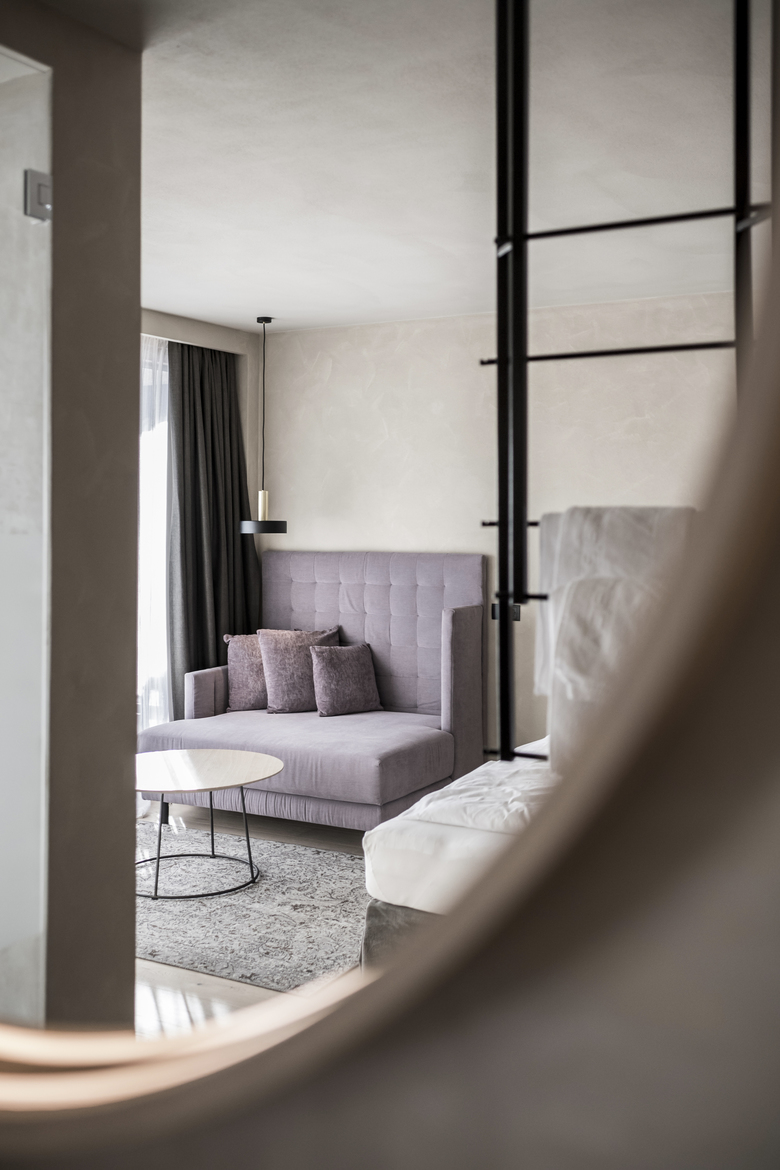 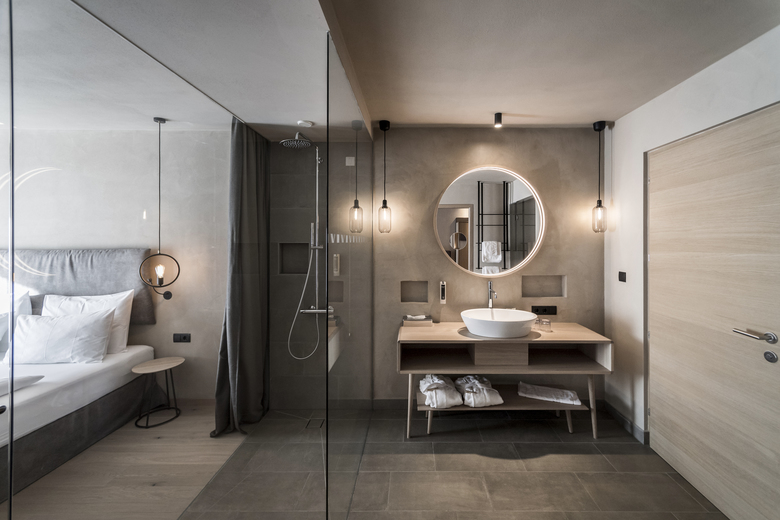 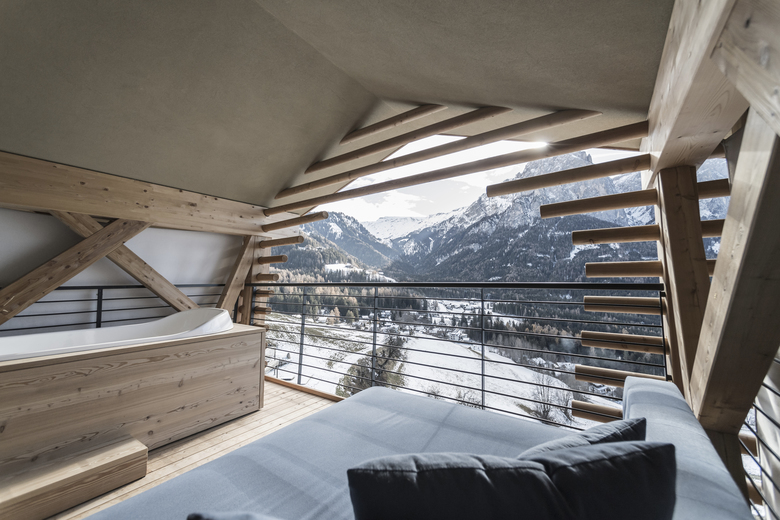 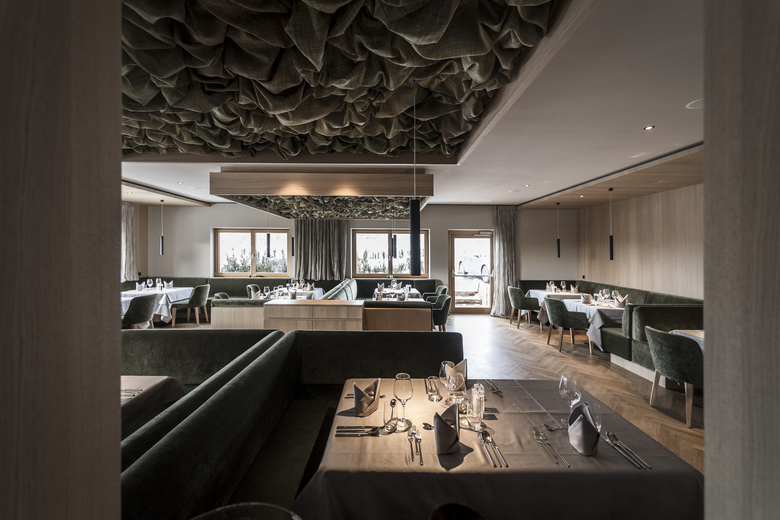 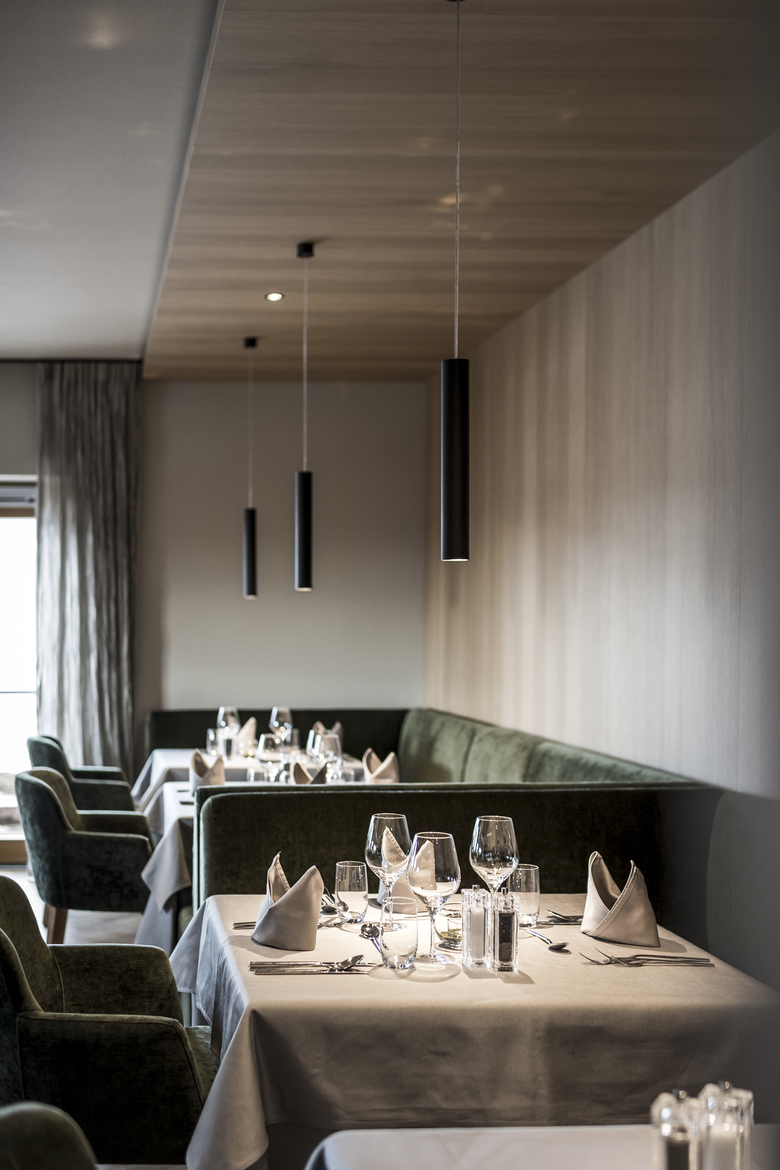 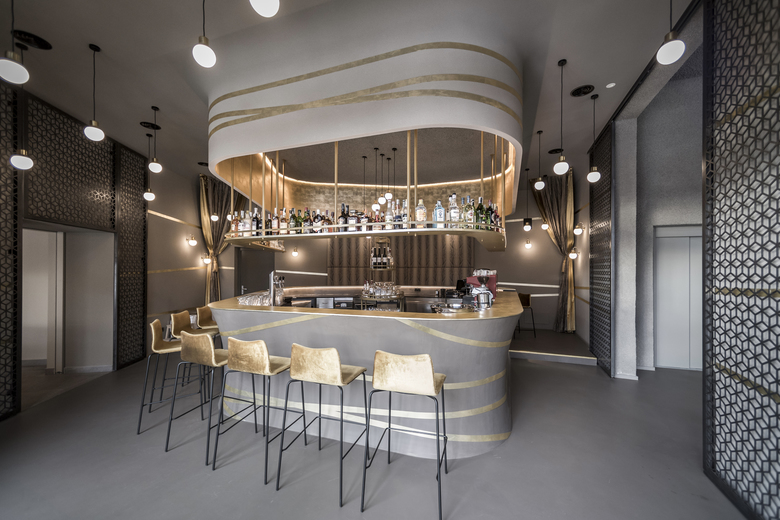 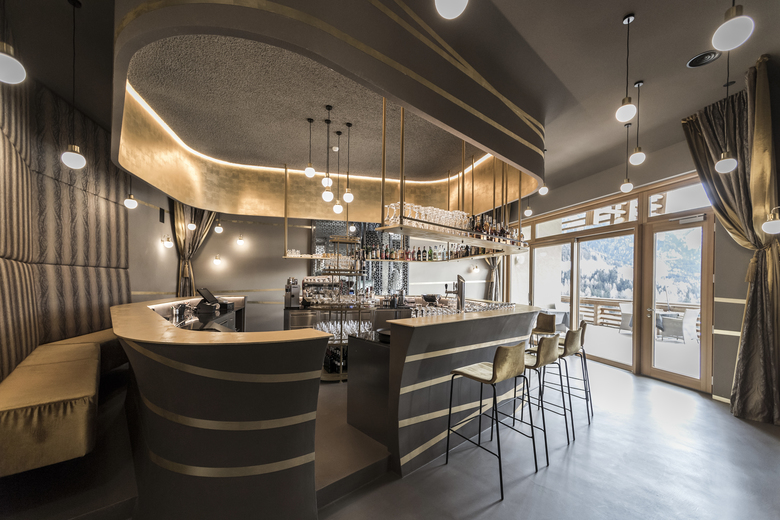 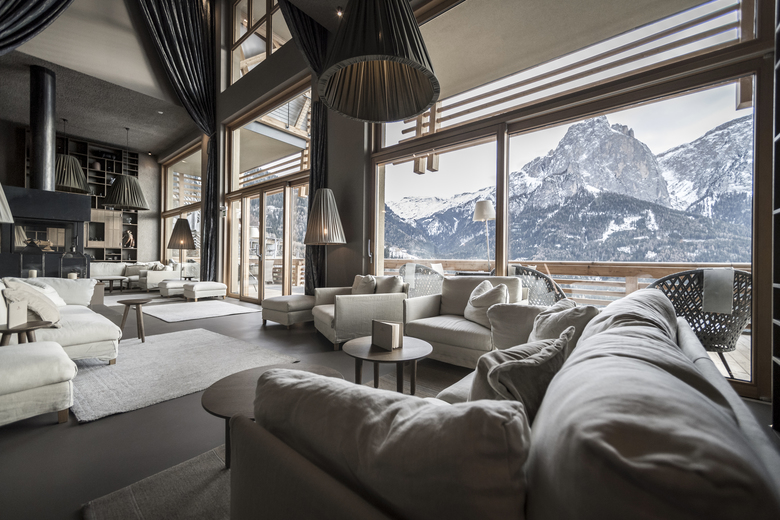 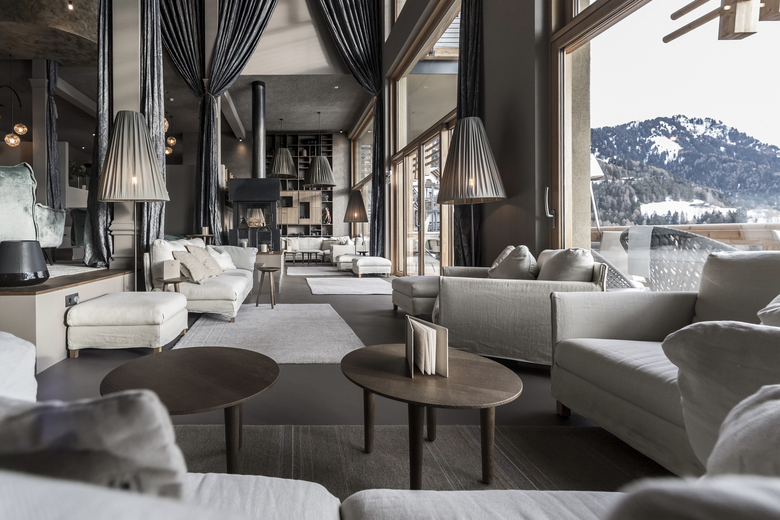 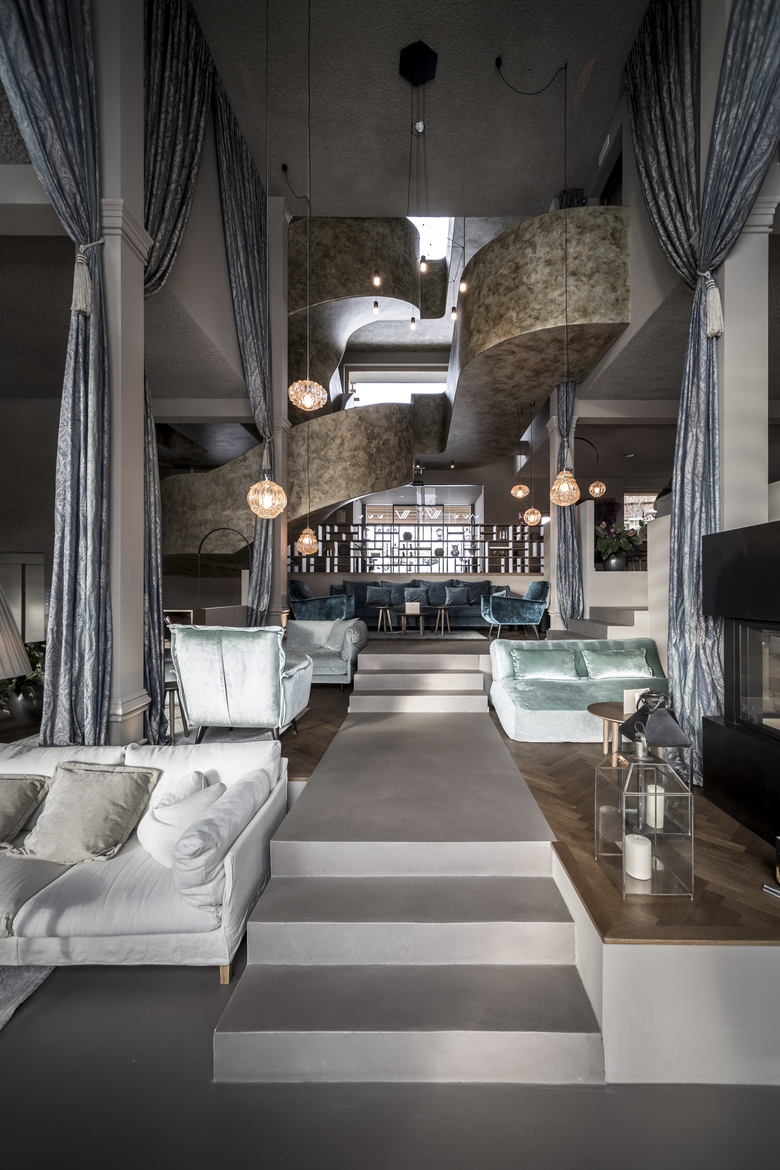 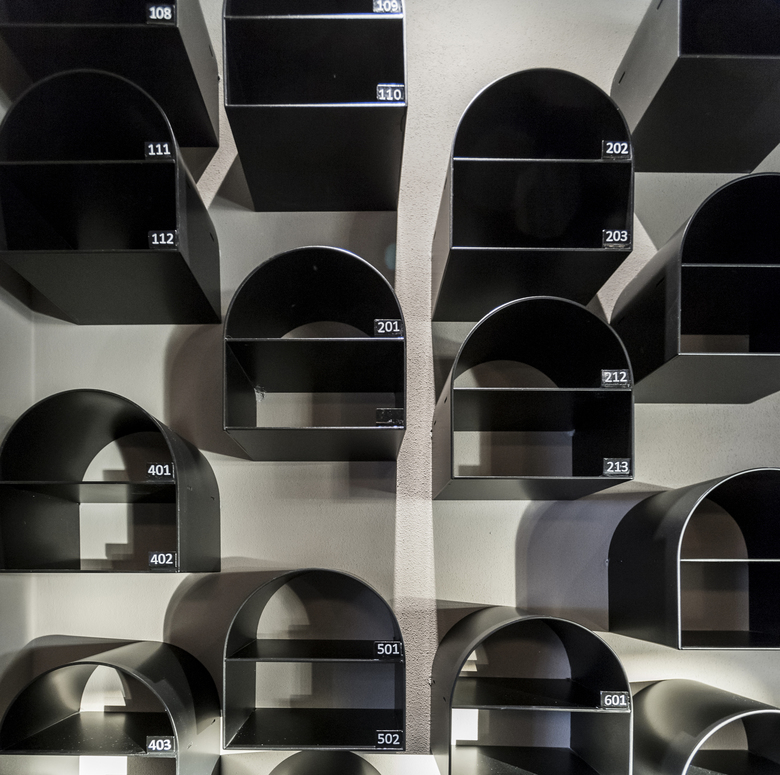 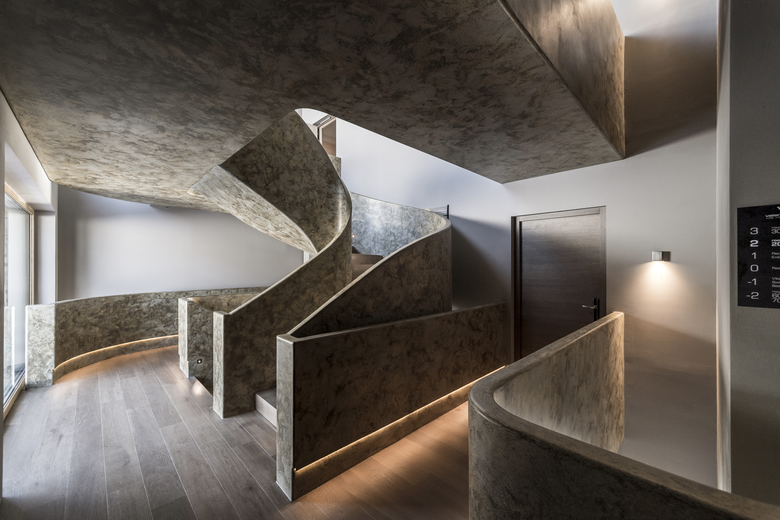 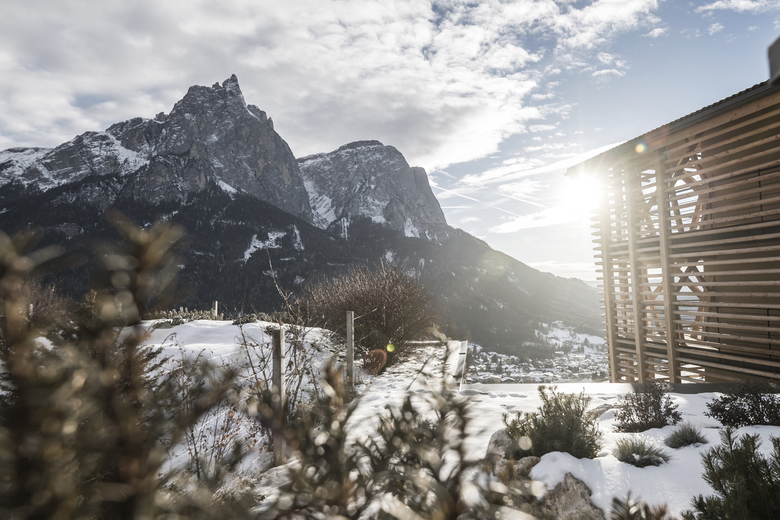 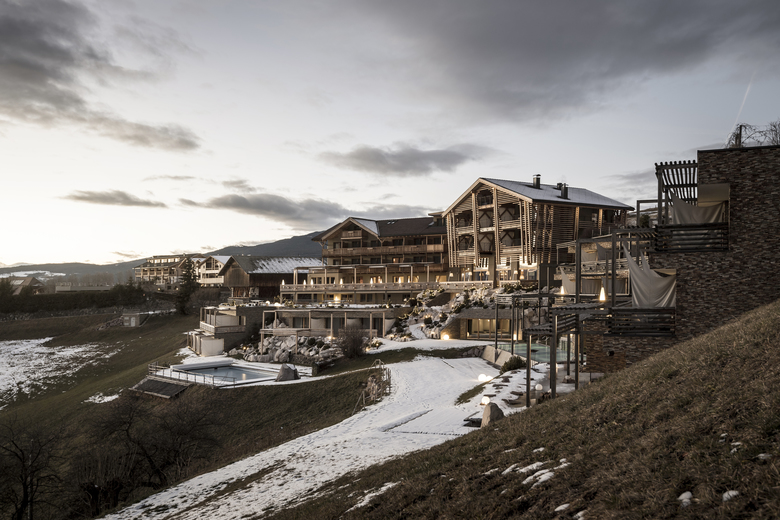 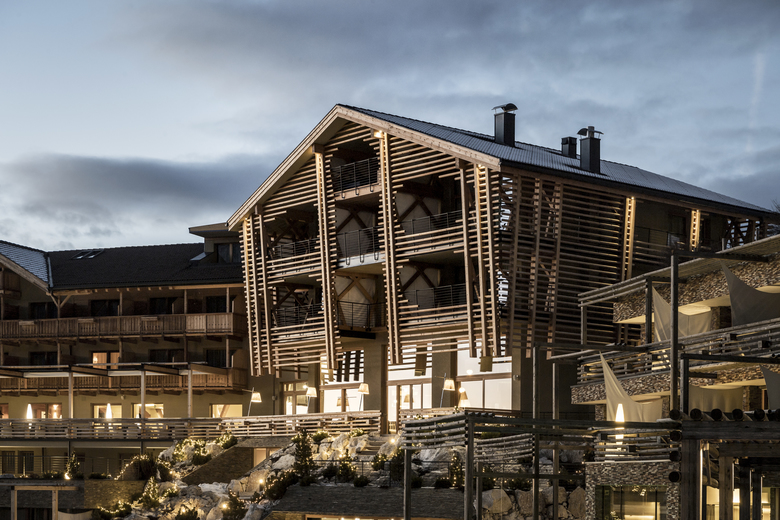 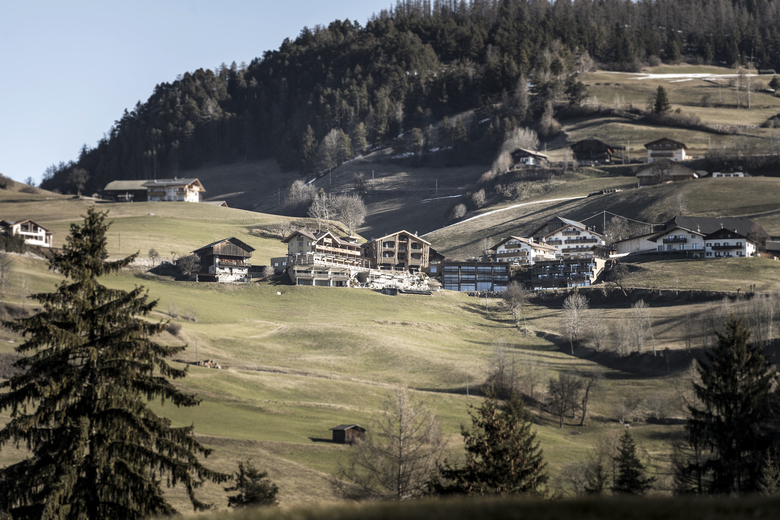 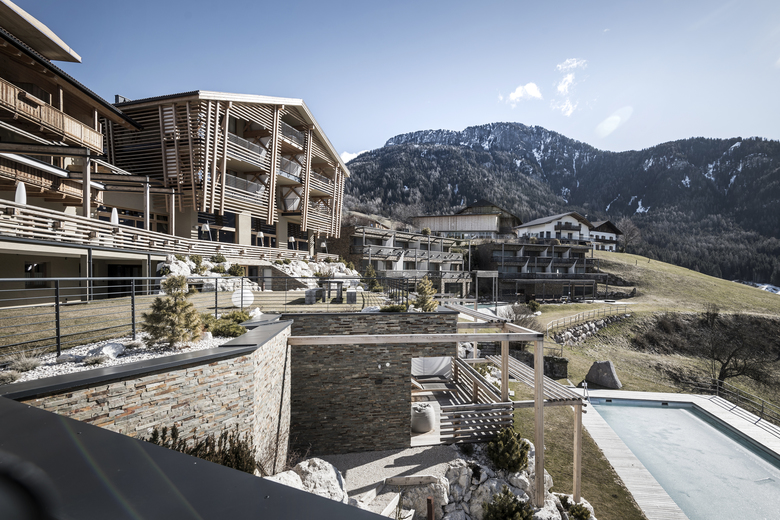 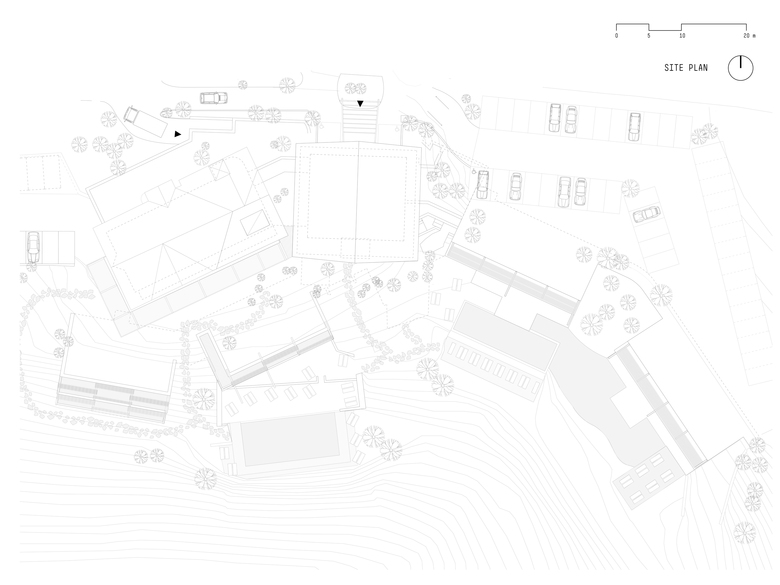 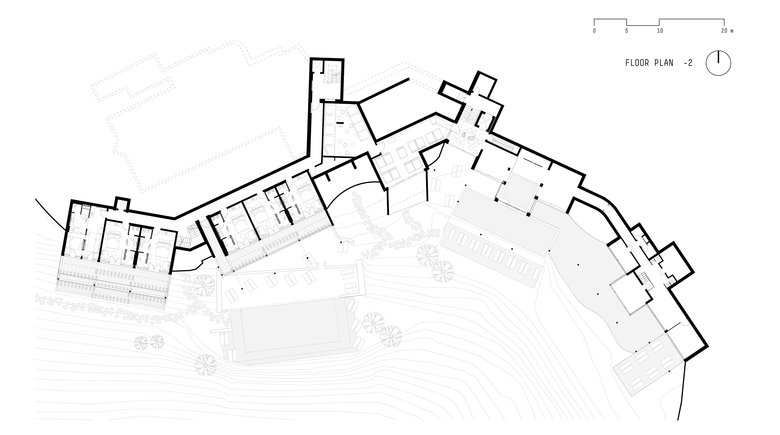 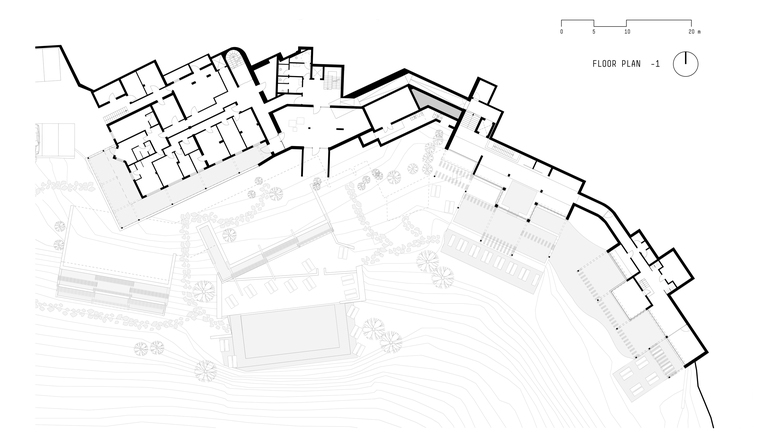 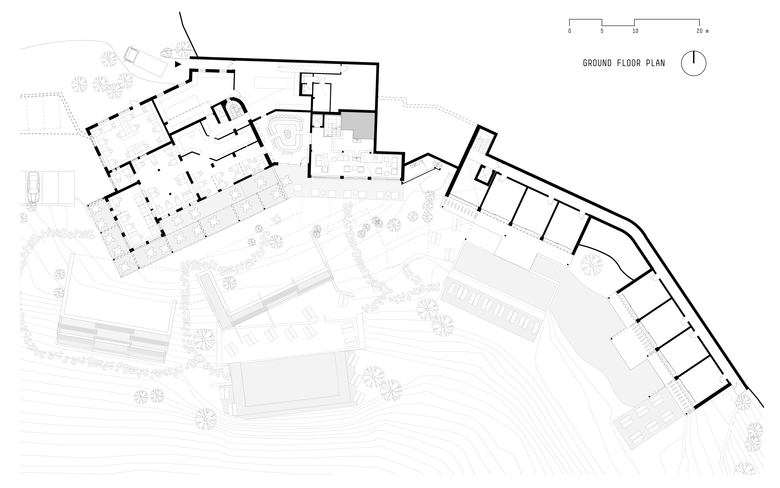 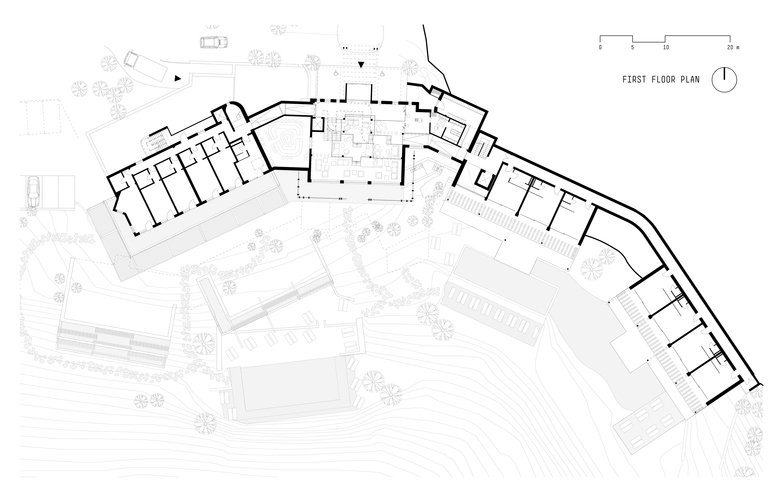 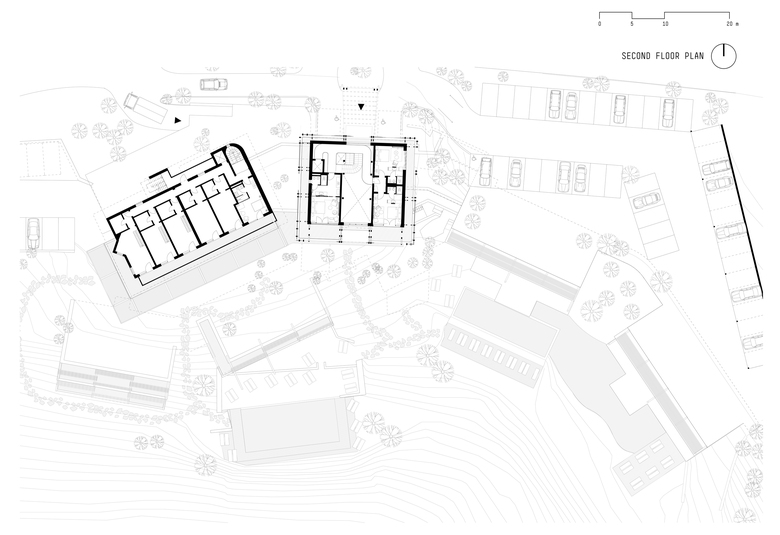 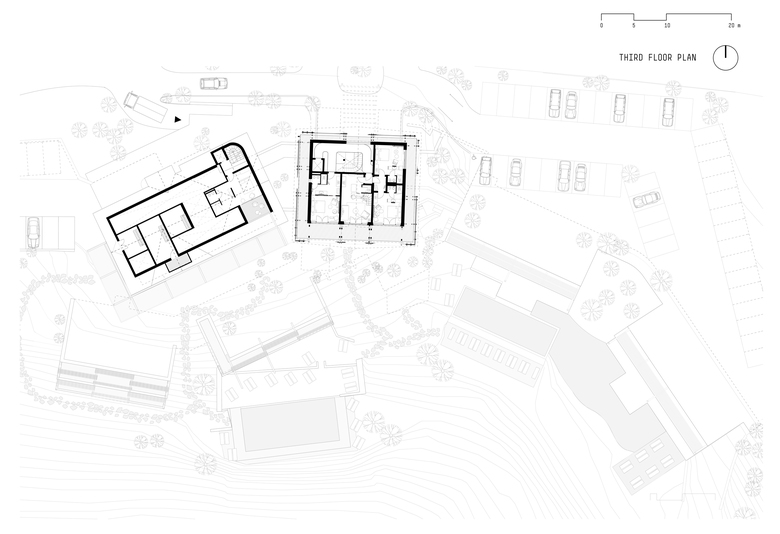 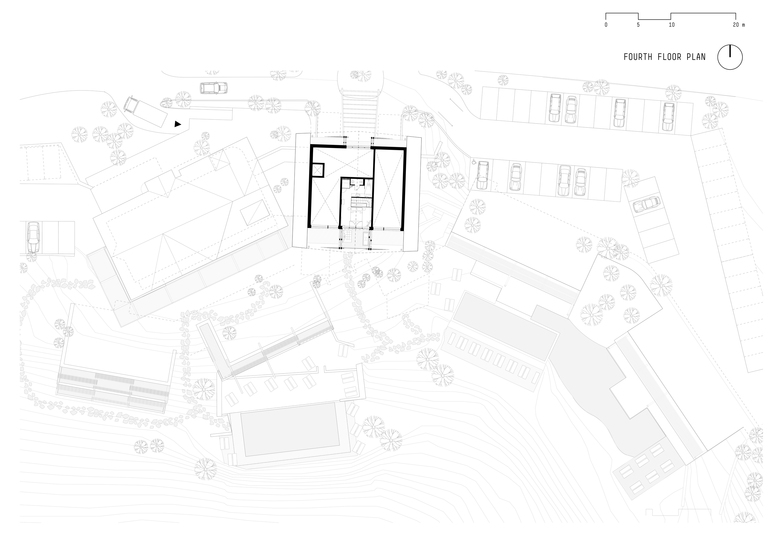 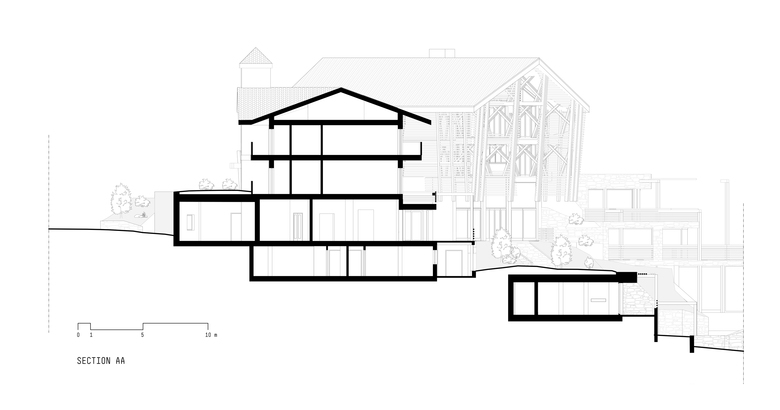 noa * (network of architecture) is rebuilding the family business Valentinerhof after the reconstruction and extension of 2011 and tries to remain faithful to the old concept of the hotel - to maintain its identity in harmony with nature. The new reconstruction is intended to reinforce the concept of integrating nature even further by taking a view of the mountain landscape from every point of the hotel.

The hotel is located in the village of Kastelruth / Castelrotto (IT) next to the well-known Seiser Alm at approx. 1200 meters above sea-level. The family business was already extended in 2011 and expanded with a new wellness area and 14 spacious suites.

During the second construction in 2017 a new building in the south-west was constructed, as well as a new main building - connecting all existing and new hotel parts. The new extensions are all facing the spectacular view of the “Schlern” mountain.

“The main concept of the recent reconstruction was to capture of the view of the “Schlern”. The mountain plays the role of the silent actor on the stage; the hotel with its guests acts as a stage with pondering viewers...” - Stefan Rier

ARCHITECTURE IN HARMONY WITH NATURE AND TRADITION
The new main building with its reception, bar, lobby and seven rooms / suites has a wooden facade reminding of typical farmhouses of the area. Irregular recesses in the horizontal wooden panels of the facade allow sufficient daylight to penetrate into the rooms behind. The glass fronts of the lobby and the rooms in the new main building underline the dialogue between indoor and outdoor - between the hotel and the landscape. They connect the spaces more closely with the surrounding nature. The new building in the southwest with nine new suites is integrated into the grounds, following the natural topography and continuing the typical character of an arena. Once again, wood elements are recommended to the building elements, reminiscent of the building tradition of the area.

THEATER PRODUCTION
The new lobby conveys the cozy upholstery furniture, the large self-designed conical lamps, the pompous curtains and the partly room-high bookshelves living room atmosphere. The gilded free-standing staircase leading to the six new rooms and the new suite on the upper floors not only fulfills the development but also the design purpose as a unique space sculpture. The playful furniture, decorations and the light create a fairytale atmosphere, which is enhanced by the view of the surrounding mountains. The "silent theater", which the mountain offers to the guest, receives almost a kind of antipode: the lobby becomes the stage of the guest, which apparently takes him to another world.

SLEEPING IN CARE OF NATURE
The new suites are characterized by an almost square floor plan and allow room-high glazing to achieve a maximum light through the room. The bed is placed in the room as in the suites of the first conversion, that the guest wakes up in the morning with a view of the mountains. The sofa right at the window suggests sitting in the surrounding garden. The dialogue between architecture and nature is also the focus here.

The concept is now somewhat extended and partly reinterpreted: by adding new, special elements, the suites get a personal, unique character. The elements of black steel, which are repeated in different versions, form towel racks and the wardrobe. The mini bar is housed in a small piece of furniture, which reminds of an old opened luggage case.

The use of more powerful and colorful color accents of couch furniture and cushions deliberately stage certain room moods and atmospheres. Rounded corners and edges, natural materials such as wood and stone for floors and furniture, create a connection to the surrounding mountain landscape.The highlight of the extension is the two-storey suite in the main house, which has a private hot tub on the terrace with a unique view of the Schlern.

NEW GARDEN LANDSCAPE
The new garden is located on different levels and connects externally via various access routes the wellness area with the bar and the restaurant. In the garden, you will find a lot of newly-planted shrubs and trees bringing nature very close to the guest.