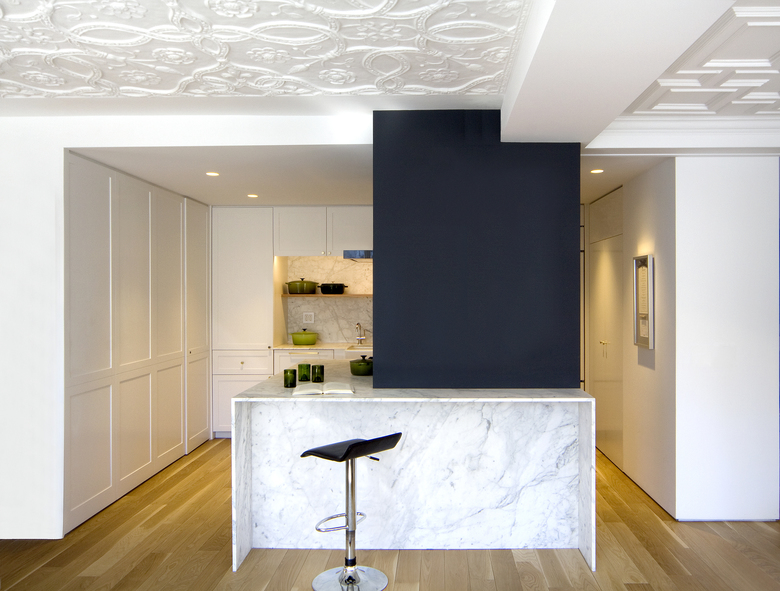 When our clients bought the apartment the space required a substantial renovation for their functional lifestyle and growing family. Their desire however was to maintain many of the original details that belonged to the apartment. Furthermore, what kept recurring during many of our meetings and conversations was their love for food and it became apparent that the kitchen needed to be open and at the center of the design. To maximize the use of the space we housed the kitchen within a niche which naturally opens up to the living spaces in a loft like manner. We took advantage of the existing large riser volume by painting it a dark shade of gray and, similar to the way a snake would coil around its branch, the kitchen wraps the pre-condition creating areas of privacy within the larger living spaces.
The living and dining room spaces preserve several of the original details and our interventions are functional and simple in their modularity. Our design clarity frames the original details such as the fireplace and ceiling. The fireplace has been stripped of the paint to expose its raw and beautiful oak panels. The ornamental ceiling, previously separated by a different color and dividing partition, is uniformed into a single space by painting it white.

The large cast iron windows facing south flood the apartment with natural light which reflects on the mostly white painted apartment. The private areas of the apartment are located on the upper level including two bathrooms and two bedrooms furnished by Carrara marble, concrete tiles and a mix of modern and traditional bathroom fixtures.